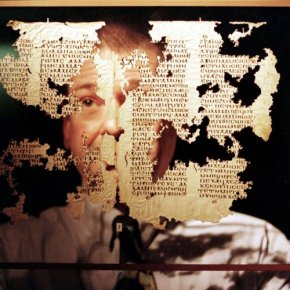 New Book! Cultural Property Crime: An Overview and Analysis on Contemporary Perspectives and Trends
(17 November 2014, Anonymous Swiss Collector)
Shameless promotion of a book that I have a chapter in.

Dismembering History: The Shady Online Trade in Ancient Texts
(23 November 2014, The Daily Beast)
With a focus on papyrus.

Chippewa tribe reburies remains returned by U-M (USA)
(19 November 2014, AP)
In the 20s and 30s the remains of almost 100 people were removed from a Native American cemetery by archaeologists. These were donated to the University of Michigan museum. Now they have been returned and reburied.

Nothing had been stolen from the museum during the recent break-in (Sri Lanka)
(19 November 2014, News.LK)
Although there was a break in at the National Museum in Colombo, the National Heritage Minister said that no museum objects were missing. The museum’s CCTV cameras had been removed during renovations.

Filmmakers sought after theft of body parts from the world’s creepiest museum (Thailand)
(18 November 2014, Washington Post)
The horrible men who created ‘bum fights’ tried to steal and smuggle baby body parts and tattooed skin from this medical museum. The pieces were seized but the men have fled to Cambodia.

Thai crusade pays off as looted treasures return from US museum
(20 November 2014, Asia One)
US Returns Looted Ancient Artifacts to Thailand
(19 November 2014, Voice of America)
The return of these items comes after the Bowers Museum in California agreed to not contest repatriation provided their staff faced no criminal charges.

Stolen ancient gold rings returned by post (Sweden)
(23 November 2014, The Local)
…and no one noticed they were gone. The letter with the returned rings criticized museum security and, seemingly, rightly so.

In France, Fears that Rare Book and Manuscript Fund is a €500m Fraud
(19 November 2014, Art Market Monitor)
The Museum of Museum of Letters and Manuscripts may be a total fraud.

Stolen statues returned (Czech Republic)
(22 November 2014, Prague Post)
The two statues were stolen in the 1990s and recovered from Austria.

Gurlitt’s mental illness invalidates his will, says report
(18 November 2014, DW)
So Gurlitt has actual family heirs. They say he had major mental health issues and thus his will leaving the art trove to a Swiss museum is invalid.

‘The Gurlitt collection should be sold to benefit Jewish organisations’
(20 November 2014, The Art Newspaper)
Discussion with Alfred Weidinger.