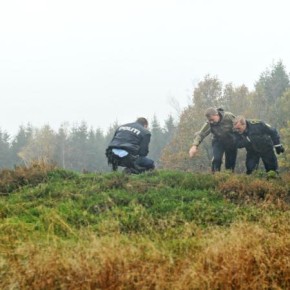 Hot this week: The surname ‘Clooney’ reappears in my news alerts once again.

Culture War: The Case Against Repatriating Museum Artifacts
(Nov/Dec, Foreign Affairs)
Suffice to say I do not agree with James Cuno here…or often.

Fighting the looting of Belize’s cultural treasures
(21 October 2014, Breaking Belize News)Reporting on a series of public workshops taking place around Belize targeted at raising awareness about the looting of cultural objects.

NICH and USA Talk Culture (Belize)
(20 October 2014, 7 News)
More info from above with short quotes from archaeologists and officials.

Peruvian artifacts found in smuggling investigation returned in Denver (US)
(22 October 2014, Denver Post)
But a lot of the shady dealings were in Utah. This is quite the case. The people involved have bee claiming they thought the pieces were fake…

Artist’s family suing each other over artwork sales (US)
(19 October 2014, New York Post)
The family of CC Wang is in a mess. Accusations on all sides. We will see what happens.

Grounds for excessive force charges in antiquity raids (US)
(22 October 2014, San Juan Record)
An alleged looter commits suicide after a Utah raid and now the way is cleared for accusations of police problems.

A Master of Art Forgery Eludes Dogged Local Tracker (US)
(22 October 2014, Citybeat)
This is about Mark Landis.

Lawmaker releases letter to OU regarding Nazi looted-art case (US)
(15 October 2014, Transcript)
An Oklahoma State Senator has sent a letter to the University of Oklahoma “to clarify the museum’s public position regarding a case involving an 1886 Camille Pissarro oil painting stolen by Nazis in 1941”.

Historic Church Bell Stolen In Upstate New York: Police (US)
(14 October 2014, Huffington Post)
I tend to agree with everyone else when they say that bell theft must be for scrap. It happens a lot in Latin America but I have never really seen a looted historic bell on the market. There are always records for bells and there is a market for unlooted historic ones, but not really looted ones. I used to work in a museum that had a strong focus on historic bells. Really. My expertise is…eclectic.

Warhol’s former bodyguard hid stolen painting for 30 years: suit (US)
(24 October 2014, New York Post)
After Warhol’s death his bodyguard was told to hand everything over. He didn’t.

$1,000 Reward Offered After Artifacts Stolen From Yonkers Church (US)
(15 October 2014, CBS New York)
Two stained glass windows were broken by the thieves as they gained access to the sanctuary.

Items stolen from museum (US)
(21 October 2014, The Islands Sounder)
A number of items were taken from the Orcas Island Historical Museum. Mostly replicas and stuff from the shop but also a Tlingit Buckskin.

Collection of ancient artifacts recovered from London (Egypt)
(21 October 2014, State Information Service)
A grab bag of stuff with not very much info offered. Some taken from  the French archaeological mission of the Louvre at Saqqara.

A collection of ancient Egyptian artefacts recovered from London (Egypt)
(21 October 2014, Ahram Online)
Even less info but a photo.

Attempt to sell 36 Egyptian artifacts in London foiled
(13 October 2014, State Information Service)
Another article with not much info from the state info service. Can’t quite tell what collection they mean.

Egypt retrieves 15 artifacts from UK, Ushabti statue from S. Africa
(24 October 2014, State Information Service
Again, almost no information. I can’t tell the bounds or cross over of these.

Case of the bronze weaver (Australia/Indonesia)
(22 October 2014, The Australian)
A must read. More questionable recent acquisition decisions from the National Gallery of Australia. Did they buy a stolen Indonesian object from collector George Ortiz?

Art forgery case pits Louise McBride versus the art establishment (Australia)
(25 October 2014, The Sydney Morning Herald)
This scandal has been brewing for a while. Worth a read to catch up on it.

Four divers charged with raiding ancient shipwreck (Finland)
(21 October 2014, YLE)
The looting happened near Porvoo in 2011 but it hasn’t been revealed what the men took.

Nazi-stolen painting put on display, sort of (Germany)
(20 October 2014, The Local)
Profile of The Wiesbaden Museum in Hessen.

Swiss museum to accept hoard of Nazi looted art
(12 October 2014, Haaretz)
Brave…I would have thought actually accepting the Gurlitt collection was pretty much an albatross around your neck. Even if a portion of it is ‘clean’ the shame will always be there.

Oxford University will return Nazi-looted salt cellar
(22 October 2014, The Jewish Chronicle)
The 16th century piece was part of a forced sale in Berlin.

Banksy Paints New Mural to Prove He’s Not in Jail (UK)
(22 October 2014, Art Net News(
…and it already got vandalised.

‘Female Banksy’: Bambi street art worth £20k stolen (UK)
(23 October 2014, Telegraph)
From a pop up gallery in Islington. They were meant for a charity auction.

3,000-year-old Ancient Egyptian sarcophagus that once held a mummy discovered in living room of Essex pensioner
(22 October 2014, Mail Online)
Okay, sure, not strictly speaking an illicit antiquities case per se, but one can’t help but note that this thing popped up in Colchester right when I i came to town to give an illicit antiquities talk.

A master forger’s works go to auction — under his own name for once (UK)
(24 October 2014, PRI The World (with audio))
Eric Hebborn’s work I suppose finding a market after his death.

The great mystery of Exeter’s disappearing historic street signs (UK)
(15 October 2014, Express and Echo)
It isn’t hard to see the theft appeal of these historic letter tiles but, heck, everyone loses when these are gone. The small pleasures of walking through a town. Real heritage of everyone.

Little Saxham: Fears historic church bells to be melted down for scrap after theft (UK)
(18 October 2014, EADT 24)
Seems likely. There doesn’t seem to be much resell value for looted bells otherwise. Perhaps I am wrong.

Pair of 350-year-old old pistols looted by the Nazis from the Rothschild family during WW2 emerge for sale for £80,000 (UK)
(25 October 2014, Mail Online)
Daily Mail headlines are so long that I don’t even need to provide a summary.

Parthenon marbles meet Hollywood as Amal Alamuddin Clooney advises Greece
(13 October 2014, The Guardian)
Oh my golly… Cringe-worthy, sure, but it might actually get them somewhere. Nothing else will work.

As a Briton, I hang my head in shame. We must return the Parthenon marbles
(19 October 2014, The Guardian)
Predictable outcome of publicity.

Louvre Recovers Stolen Painting
(21 October 2014, ArtNet)
The painting of King Henri III was set to be auctioned in Paris and valued surprisingly low.

Vatican monsignor pressured to return church valuables that went missing on his watch (Italy)
(25 October 2014, National Catholic Reporter)
“During his 20 years as pastor in a town on the outskirts of Turin, many paintings, statues, furniture and other objects have been lost and then found in private homes”

In war against ISIL, a fine line between facts and artifacts
(22 October 2014, Al Jazeera)
And there is little in the way of ‘facts’ right now.

Kobani protesters damage library and museum in Turkey
(12 October 2014, Today’s Zaman)
I am not able to evaluate this so I will just leave this as is.

120 arrested, 1,300 relics seized in Zhejiang’s ‘biggest ever’ tomb-raiding case (China)
(24 October 2014, South China Morning Post)
If these numbers prove true this is a truly amazing bust. I would love any more info about it if you all have any.

Toledo Museum of Art Returns Stolen Statue to India
(16 October 2014, ArtNet)
Subash Kapoor loot trafficked to the US, bought by a museum, now going back. We need to ask museum due diligence questions. This can be done much better. Museums: call me.

Kiwi detained after statue smashed (Cambodia)
(13 October 2014, The New Zealand Herald)
Okay, so, this Kiwi lady just sort of smashed up a statue at Angkor Wat because ???

A history of theft and recovery (Thailand)
(26 October 2014, Bangkok Post)
“The return of 554 objects from the Bowers Museum in the US was the latest in a series of cultural artefacts being repatriated to Thailand.”

Man booked for hiding stolen Buddhist treasures (Korea)
(22 October 2014, Yonhap News)
He has had around 48 stolen pieces in his warehouses since the 1980s and he took out loans with some of them at collateral.

Celebrated British warships being stripped bare for scrap metal (Malaysia)
(25 October 2014, Telegraph)
Oh salvage law, you confusing beast. This article implies but doesn’t say that the activity at these wrecks is illegal and I guess, you know, flying the flag and all that.

Did Picasso Try to Steal the Mona Lisa?
(23 October 2014, The Daily Beast)
Probably not…

Morocco fossils: A rare and vanishing treasure
(24 October 2014, Middle East Online)
As you all know, fossil theft is a thing. We should approach it like cultural property.

Dinosaur footprint theft: Judge sentences Utah man to 1 year probation, $15,000 in restitution
(20 October 2014, The Republic)
This is the case that hit the news big time a few months back.

The Stradivarius Affair
(November 2014, Vanity Fair)
Why did a ‘street criminal’ steal a Strad?

Frieze: even sleeping security guards are art in a world of elaborate disguises
(14 October 2014, The Guardian)
I love this!