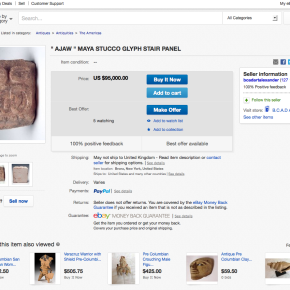 This has been a bad week for Maya monuments in the US. 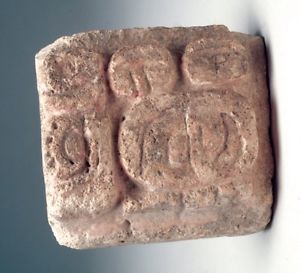 Front of the ajaw glyph. Maybe with some paint still there.

Last Monday archaeologist Jeb Card drew my attention to what seems to be a particularly brazen eBay listing. Described as a fragment of a Maya hieroglyphic staircase, this stucco piece is an ajaw glyph, which is a title of Maya lordship, godliness, and pretty much the ability to command the building of a hieroglyphic staircase. I have no way to confirm that it actually CAME from a staircase, but it appears to be real (persons more knowledgeable agree).

The object is listed as being from the “Carolyn and Walter Foxworth collection”, one that I am not familiar with. Their names kick up for an Arte Primitivo auction, though, among other places. No findspot (or even country) is offered for the item. As for collecting history, only fluffy dates are offered: “1960s–80s”. This, of course, reeks of obfuscation. So MAYBE before 1972 when it became illegal to import Maya sculpture into the US (more on that in a moment) but CERTAINLY before and of those countries signed a bilateral cultural property agreement with the US. Convenient. 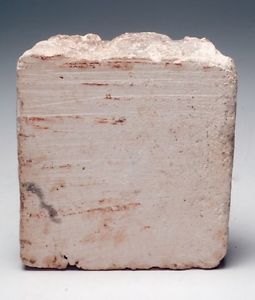 Sawmarks on the back of the ajaw glyph. Proves authenticity?

A view of the back shows saw marks: evidence of how a Maya site was mutilated to rip this item from its context so that someone can buy it on eBay. Buy it now for $95,000.

If you are so inclined, please report the listing at an eBay violation. There is a Report Item link. Choose: “Prohibited and Restricted Items” –> “Artefacts, Grave Related Items,…” –> “Other Artefacts and Grave Related Items”. EBay will do absolutly nothing about it, but it’ll at least show that someone cares. 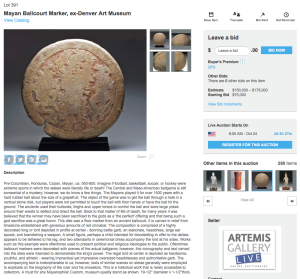 Yesterday I found out that Artemis Gallery was offering for sale a carved Maya ballcourt marker. Despite expecting “$150,000–$175,000” for the piece, the auctioneers were too dense to not use the word “Mayan”* to describe the thing. There is no photo of the back of the marker, but it appears to be quite slight. This could indicate that the piece was “thinned” during the looting process. Looters would have sliced the carved top off the thicker marker to make it easier to transport, mutilating the piece. I can only wonder if the auctioneer isn’t showing the back so that we don’t see the saw marks. 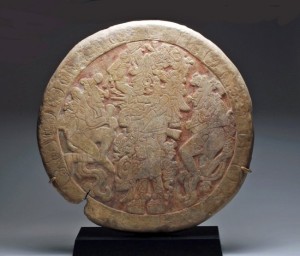 The marker is listed as being from Honduras and as ex Denver Art Museum (acquired in 1986). So the Denver Art Museum has a history of poor purchased of looted and mutilated Maya material. They have, for example, a glyph panel looted probably from Site Q (La Corona), a site famous for being gutted before archaeologists got near it…mostly existing as looted objects on the market. They’ve had to repatriate a wooden lintel stolen from the site of El Zotz. At least in the past, the Denver Art Museum has had no qualms about buying terrible things and at some point they either bought this looted ballcourt marker, or it was donated to them and they accepted it. 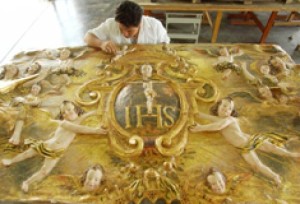 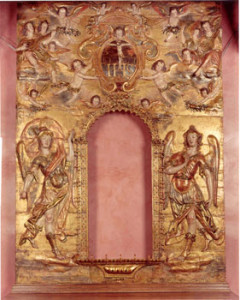 Wait, hold the phones. RON MESSICK! Ron Messick is the compete piece of work who thought he could steal, import, and sell the massive silver Altar of Challapampa in 2002! Ron Messick who was facing federal prosecution for that whole shebang before he conveniently died. Seriously. That guy. Check it out. I have a piece about the Challampampa Altar coming out on the Trafficking Culture website. Sterling provenance.

FYI the altar is now marked “Lot Passed” meaning it didn’t sell at auction and is now for sale not via auction at a lower price.

I say these objects are looted because in the real world there is no possible way that they are NOT looted. The few Maya monuments that made it out in the early 20th century before the Maya countries cracked down are few and well known. Just because having them in the US isn’t fully ILLEGAL doesn’t mean their removal and export was LEGAL. It wasn’t. They are illicit antiquities and they represent the destruction of the past, not preservation.

For shame to all involved.

I get worked up about Maya monuments.

It has been illegal to import ANY Maya sculptural or architectural piece into the US without a permit since 1972**, and none of the countries of origin issue permits because all of them own all of their Maya cultural property. This 1972 law followed Clemency Coggin’s famous paper on the topic, several high-profile Maya looting and trafficking cases (e.g. Machaquilá Stela 2 which resulted in U.S. v. Hollingshead), a 1970 cultural property agreement with Mexico and the umph of the 1970 UNESCO convention. However, unlike the UNESCO convention, this is not a bilateral agreement, it is a US-side ban on the importation of certain Precolumbian pieces. It doesn’t matter where they came from. No: if you are trying to take a Maya sculptural or architectural piece into the US and you have no permit to do so, you are not meant to get in. There is some evidence that this outright ban largely killed the US market for freshly-looted Maya sculpture and architecture. Sadly, there is also evidence that the ban INSPIRED systematic and devastating looting for Maya items NOT covered by the ban: pottery, jade, small items. Those pieces needed coverage too. I’ve got some papers coming out about that.

See I am a fan of object-based not country-based bans as they are grounded in reality. There is no way that stuff isn’t looted from SOMEWHERE so why are we even entertaining the idea that it might NOT be looted by requiring an owner to claim it and prove ownership? The very act of looting obscures the ownership of the piece, thus traffickers and criminal receivers of these goods are protected by their own criminal acts. Why are we playing that game?

But, of course, people still want to buy Maya stuff because it is (if you allow me some devotional hyperbole here) the most beautiful art ever created by human beings. The insatiable need to posses is strong (apparently…I don’t feel this need at all). Thus someone out there is going to plunk down $95k for a mutilated piece of a Maya building (with SAW MARKS) and feel proud of themselves for doing that. And someone is going to toss in over $100k for a piece of global tragedy, a symbol of all the information we have lost about the Maya, and pat themselves on the back for it (and maybe get a tax break).

*Anyone who uses the word “Mayan” to describe anything other than a written or spoken Maya language does NOT know what they are talking about and should not be trusted. This is a way to tell if the news report you are reading is BS. If they say “Mayan” the person is either a whackjob or has not done any research so, you know, disregard.

**I am unable to tell when these objects left their country of origin. I do not know if they were imported into the US in violation of the 1972 law. They very well could have been. Neither seller provides pertinent information about the objects’ legality. I don’t think they should be considered innocent until proven guilty as, really, there are no innocent Maya pieces for sale. These objects should be considered guilty until proven super guilty.