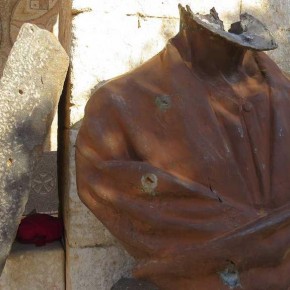 2 Egyptians arrested for possessing illicit antiquities
(27 July 2014, Business Standard)
Father and son busted with over 600 pieces, although I would guess they were either small or they counted each bead of a necklace.

Armed looters and violence threaten Egypt’s heritage
(29 July 2014, The Archaeology News Network)
It is hard to come up with new things to say about these Egypt articles.

Nigeria: How Benin Recovered Stolen Artefacts
(28 July 2014, All Africa)
More on the recent voluntary return from a private individual in the UK.

Boston MFA’s Provenance Research Reveals The Illicit Trade In African Antiquities
(30 July 2014, Chasing Aphrodite)
I am not sure ‘reveals’ is the correct word for something we’ve known quite a lot about for some time, but this is a fascinating read. I’ve wondered just exactly what museum provenance research was like.

Group demands return of looted Benin Artifacts
(31 July 2014, Nigerian Observer)
The other side of the previous link is that the REST of the Nigerian items in the MFA are questionable at best are not being returned. The signage in the new Benin hall implies that it is a good thing that artefacts were taken because ‘we’ now get to see the pieces…

Boston-Based Group Urges Massachusetts Museum To Return Looted Artifacts To Nigeria
(3 August 2014, Sahara Reporters)
More on calls for the return of the rest of the MFA’s questionable Nigerian items.

Seoul investigating reported cover-up over artifacts by Japan
(29 July 2014, Yonghap)
Rumors that Japan has lied about the number of Korean cultural objects taken during the occupation.

Antique Idols Stolen from Shiva Temple (India)
(2 August 2014, The Indian Express)
Two idols were stolen from a Shiva temple in Ayodhya village this week. This is the second idol theft that the village has faced. These particular idols were discovered in 1950.

Chhotelal Bharany’s passion for rare art and artefacts has benefited museums worldwide (India)
(3 August 2014, DNA India)
Short interview with an Indian dealer/collector who “won’t talk about the pros and cons of the Antiquities Act”, much to my disappointment.

Macedonia Jails its Top Archaeologist
(25 July 2014, Balkan Insight)
Same story as last week but with a bit more detail. The former head of Macedonia’s Cultural Heritage Protection Office, Pasko Kuzman, gets three years for allowing people to dig up antiquities for sale, apparently, and other things.

Takeley man faces possible jail time over theft of armour from Mountfitchet Castle (UK)
(28 July 2014, Dunmow Broadcast)
Mountfitchet Castle is a real Norman motte and bailey castle with some horrific wooden stuff and wax models getting tortured slapped on top of it. And roaming animals. I think it is a private enterprise but don’t quote me on that. It is a weird place. This guy stole some armour from it…but it was reproduction armour. Unclear if he knew that.

English Museum Loses Accreditation for Selling Ancient Egyptian Statue
(1 August 2014, The New York Times)
To be honest, they probably still think it was worth selling the statue based on the amount of money they got for it. I doubt they would be getting $27 million in public funds from the current UK government over the next five years.

Cross at medieval meeting place in Cambridgeshire stolen
(30 July 2014, BBC News)
The stone piece is 180 years old and was taken from Sutton Crossways near Ailsworth, Peterborough. Other stone monuments in the area have been taken as well.

Auctioneer Surprisingly Released from Jail (Germany)
(28 July 2014, Artnet News)
Herbert Schauer, the  director of the Munich based Zisska & Schauer, has been released after being sentenced to 5 years for the sale of books stolen from Biblioteca dei Girolamini, including a first edition by Galileo. This is because of judicial review of his case.

Detenido tras robar el cepillo de la Iglesia del Sagrado Corazón en mitad de una misa (Arrests after robbery of the chapel of the Church of the Sacred Heart in the middle of mass, Spain)
(28 July 2014, Huevla 24)
Not an art theft as the thief forced the door of an office during Mass and stole money from the church, but I want us to keep talking about theft from Spanish and Latin American churches.

Raiders target archaeology digs (France)
(30 July 2014, Connexion France)
Archaeologist’s claim that 520k artefacts are taken from French sites every year seems high, but it is unclear what she counts. Maybe it isn’t high at all.

Champagne producer charged with looting historical sites (France)
(30 July 2014, The Telegraph)
Police found around 2,300 objects when they searched his home. The detectorist claims he didn’t know that the sites he was looting were protected by law.

Stolen Cini Foundation “Rembrandt” Found after 35 Years (Italy)
(31 July 2014, Artnet News)
Among 10 works taken from Castello Cini di Monselice in 1979. A French collector attempted to put it up for auction in 2009 and it turned up in a stolen art database. Then the unnamed collector refused to return it for about 5 years. The painting is actually by Pietro Bellotti and the Rembrandt name was added later.

UNESCO Urges End To Destruction Of Iraq’s Cultural Heritage
(28 July 2014, RTT News)
UNESCO would be quite remiss if they didn’t urge this. We will see how the Emergency Response Action Plan works out but I don’t have a lot of hope for it.

Tears, and Anger, as Militants Destroy Iraq City’s Relics
(30 July 2014, New York Times)
This article focuses on reaction to destruction on the ground. It portrays people being upset with ISIS for heritage destruction.

Colombia Busts Antiquities Traffickers
(28 July 2014, NDTV)
Two arrested with over 850 looted antiquities in their home and in a warehouse. They were selling them to foreign tourists.

Capturan a familia dedicada al saqueo de cementerios indígenas (Family dedicated to looting Indigenous cemeteries captured, Colombia)
(28 July 2014, El Espectador)
Same incident, only the story is in Spanish. This article says that three people were arrested. Artefacts from Nariño are beautiful and in high demand. The area is known for ancient goldwork, but the article doesn’t say what they had. It does say that the objects were exported abroad with false export permits, and moved around from country to country to increase their value.

Objetos del patrimonio arqueológico colombiano son repatriados (Objects of Colombian archaeological heritage are repatriated)
(1 August 2014, El Espectador)
More news from Colombia, a group of what loot to be small gold artefacts have been repatriated by a Belgian.

Saquean 63 iglesias en seis meses (63 churches looted in six months, Guatemala)
(28 July 2014, Prensa Libre)
Most of these were evangelical churches that weren’t robbed of historic items, there were a number of art thefts from historic Catholic churches as well. There is a market for it.

Descubren sitio arqueológico en Huehuetlán el Chico (Archaeological site discovered in Huehuetlán el Chico, Mexico)
(28 July 2014, El Sol de Puebla)
Years of looting at this site has taken its toll but for the first time locals are working on getting a museum together and are also working with archaeologists. The Mayor has asked that anyone with artefacts in their home come and share them with the experts, no questions asked (I think).

Hereditary chief demands Ottawa museum return artifacts or show bill of sale (Canada)
(29 July 2014, APTN)
There appears to have been some miscommunication at the museum about performing a ceremony but Beau Dick of the Namgis First Nation (British Columbia) has linked the museum’s continued holding of Native artefacts to oppression and genocide.

Ancient Egyptian mask likely to stay at St. Louis Art Museum after feds give up legal fight (USA)
(28 July 2014, St. Louis Post-Dispactch)
Probably the end of the road for the Ka-Nefer-Nefer case after the US Govt lets a time limit pass. A shame. The thing is stolen. I hate that a ‘lack of proof of lawful transfer’ is allowable and can’t serve to indicate a object is likely stolen. Everything is turned the wrong way, burden of proof-wise, in antiquities cases.

50 years of exploring Florida leads to many finds (USA)
(3 August 2014, The News Times)
Completely uncritical piece that never discusses the potential illegality of this man’s actions.

Art thief flies under the radar at Juneau airport
(1 August 2014, Juneau Empire)
A piece of Native art was stolen from the Juneau airport, right off the wall. It isn’t a high value piece, but the theft shows the appeal of Native Alaskan art.

Providence man: I made ‘ancient’ markings on rune stone (USA)
(2 August 2014, Providence Journal)
Archaeological fraud is as much a culture crime as anything else, but this was allegedly done by a 13 year old boy with a book on runes. The story behind this one is worth a read.

Relics from Butte mine yards stolen, sold as scrap metal (USA)
(1 August 2014, Ravalli Republic)
Historical and industrial heritage pieces are increasingly being targeted by scrap metal thieves. I know stories like this from all over the world.

Genuine or a sneaky forgery? (Australia)
(29 July 2014, Lithgow Mercury)
A row concerning Aboriginal (or modern?) rock art, an archaeologist contracted by a mining company, and the threat of mining extensions heats up.

Art World Favorite The Goldfinch Clinches Movie Deal
(30 July 2014, ArtNet News)
Art crime folks: best read it now, you are going to be asked about it a lot.

Artist claims $2.5m crate sculpture is a copy of his work
(30 July 2014, Sydney Morning Herald)
An the City of Sydney has paid for it.

New York Times Arts Reporter Copies Renaissance Painter’s Wikipedia Entry
(29 July 2014, Hyperallergic)
We all use Wikipedia heavily for nearly everything we do (admit it), mostly as a casual starting-off point. However, the rest of us double check with real sources and, you know, don’t plagiarism word-for-word.