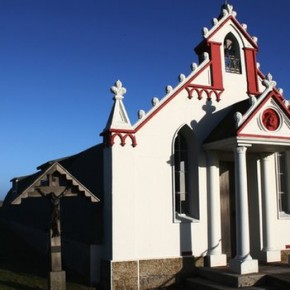 Hot this week: Church looting in Scotland, England, and Italy.

As Museums Try To Make Ends Meet, ‘Deaccession’ Is The Art World’s Dirty Word
(12 August 2014, NPR)
This isn’t a crime, per se, but it should be a point of discussion. In a way this anti-deaccession fervor (punctuated by deaccessions) shows a) we imagine museums as black holes that objects can never again emerge from, which is dangerous; b) the heritage sector is critically under funded.

The Lure of Antiquities
(15 August 2014, New York Times)
A trot around the usual antiquities dealers. Quotes from Sam Hardy and one of Neil Brodie’s papers.

New to the Archaeologist’s Tool Kit: The Drone
(13 August 2014, The New York Times)
A talk with Peru’s Luis Jaime Castillo Butters and DePaul’s Morag Kersel about the use of drones to monitor sites for looting damage.

Chinese folk first Japanese royal family to recover looted artifacts now in the possession Palace
(11 August 2014, EN News 163)
Well, I mean, I think there is some interesting news in there on Chinese claims for objects in Japan but whoever clicked on Google Translate here butchered the thing. Try to see if you can get much out of it.

Chinese group appeals to Japan’s emperor over artefact
(12 August 2014, Channel News Asia)
Much better! So yes, they are seeking the return of an ancient stela taken by Japanese soldiers at the start of the 20th century.

Crown found off Harappan site in UP (India)
(8 August 2014, Times of India)
Folks building a brick kiln in Chandayan village, Baghpat district, chanced upon a human burial with what appears to be a crown on its head, pretty cool if actually IVC. Of course everyone started looting the place. The Archaeological Survey of India has recovered some pieces and teeth. I had totally missed this story, despite my intense love of the Indus Valley Civilization. Thanks to Peter Campbell for posting it.

17th century Ramayana manuscript under lock and key after theft (India)
(11 August 2014, The Hindu)
A complicated story summed up in, perhaps, a too-short article. Manuscript theft is a major issue and I can imagine Indian manuscripts, such as this rare one, are desired. Sadly I know little about this market.

Stolen Valley Durga in Stuttgart, ASI builds case for its return (India)
(12 August 2014, The Indan Express)
So seems clear that the Linden Museum in Stuttgart bought a piece looted from Kashmir in the 90s, maybe from Subhash Kapoor. Instead of playing the good guy and just handing it over, the museum director actually said “Germany too has lost a lot of Holocaust heritage but never got it back.” I can only hope that this was taken out of context because, wow.

16 incidents of antique thefts in last four years: Govt (India)
(12 August 2014, The Free Press Journal)
Surely a low, low number, but this is what was put forth for antiquities theft in India.

Looted Shiva left outside for repair (India)
(16 August 2014, The Australian)
Apparently one of the looted Shivas in the Art Gallery of New South Wales was outside for unauthorised repairs when it got stolen, then smuggled.

Arqueóloga de EEUU: Bolivia no reporta robo de arte colonial (US Archaeologist: Bolivia doesn’t report robbery of colonial art)
(16 August 2014, Los Tiempos)
Ack! I’m the unnamed Fulbright Scholar in this article. I don’t agree with everything in this. I think church robberies are recorded and reported. That is how I was able to get details of those 36 robberies they mention. I just don’t think the US is given access to said information by default which may, indeed, be a violation of the bilateral agreement.

El futuro son los restos (The future is the remains; Mexico)
(10 August 2014, El País)
In the last 18 years, 5000 artefacts have been ‘rescued’ by the Xico Valley Community Museum, all of which were found by locals while doing normal fieldwork and would otherwise have trickled into the illicit market.

Zona arqueológica, a merced del saqueo (Archaeological site at the mercy of looting; Mexico)
(10 August 2014, Noroeste)
The archaeological site of El Calón has been being looted despite it’s listed status. Locals are calling for guards and protection.

Miami Artist Who Smashed Ai Weiwei Vase Pleads Guilty
(13 August 2014, ArtNet News)
He is going to pay $10k in restitution to the insurance company. This, of course, was in reference to Ai’s smashing of a Han dynasty pot so double the art crime (art crime?) intrigue.

Archaeological coalition says Aswan tombs robbed (Egypt)
(10 August 2014, Egypt Independent)
The Antiquities Coalition, a non-profit group, claims that 10 tombs in Aswan were robbed. More information (photos, details) are clearly needed before any comment can be made.

Stolen fragments from pyramid tomb to be returned from Germany
(15 August 2014, Ahram Online)
This one was pretty shocking all around. The men were complete cranks. I want to know how they had access.

Mosaics destroyed by treasure hunters in Central Anatolia
(14 August 2014, Hurriyet Daily News)
Looters in the province of Karaman’s Sarıveliler district used a mechanical excavator to bust up the area. A teacher visiting home during the holiday period reported the destruction. The mosaics and ceramics might be Roman.

Iraq’s archaeological treasures at risk of destruction by ISIL
(15 August 2014, Al-Shorfa)
Yet again I caution that anything coming from Iraq or Syria has been filtered through all sorts of strange sources so take it all with a grain of salt. This article says that the ISIL seized the Mosul Museum in July and is using it as a base of operations.

Theft of plaques from Orkney’s Italian Chapel condemned (Scotland)
(13 August 2014, BBC News)
The chapel was built during WW2 by Italian POWs and the wooden plaques were gifted in 1964. Like in a lot of church thefts there is a long span of days in which the thefts could have occurred, but if anyone has taken photos of the walls of the chapel between 29 July and 12 August, they are urged to contact HighlandIslandMailKirkwall@scotland.pnn.police.uk

Ancient armour stolen from Northumberland church (UK)
(16 August 2014, BBC News)
17th century armour that had been in St Aidan’s Church, Bamburgh for 400 years has been taken. Like above, the items could have been stolen as far back as April. This is very common in church theft.

Thieves steal 17th Century armour from Northumberland church
(17 August 2014, The Journal)
A lot more info in this piece, both about the robbery and the display of it. Anyone who has been in the church since April and who has photos are urged to contact the police as they are trying to pin down when the armour was taken.

Scilly treasure hunter finds remains of possibly the oldest shipwreck in the islands (UK)
(16 August 2014, The Cornishman)
This article broke my heart. A diver in Cornwall appears to be systematically looting wrecks. I keep thinking that this must be illegal but I know nothing about underwater archaeology law in the UK. Here’s hoping it is and someone has called the police.

Mackenzie Crook unearths metal detector sitcom (UK)
(11 August 2014, BBC News)
I’m not laughing. This is going to be a nightmare.

Nighthawkers hitting more archaeological sites (Finland)
(13 August 2014, YLE)
See, this is why a metal detecting sitcom is a nightmare. Finland is noting an increase in illegal metal detecting.

Warsaw Will Return 1,000 Gravestones to Jewish Cemetery
(15 August 2014, Tablet)
The matzevot were looted to build some stairs in a carpark. Looting of stone from Jewish cemeteries has been common since the 40s apparently. This slideshow of looted matzevot is pretty horrific.

Συνελήφθησαν στη Μήλο δύο Γερμανοί με ρωμαϊκό αμφορέα (Two Germans with Roman amphora arrested at Milos, Greece)
(16 August 2014, IN.gr)
The couple were stopped at the airport with the very small piece in their suitcase. Looks to be the sort of tourist souvenir small scale deal but good for them for cracking down on it.

Vous avez découvert un trésor: qui en est le propriétaire? (You’ve discovered treasure: Who is the owner?; France)
(12 August 2014, L’Express)
A short break down of who owns what and why when ‘treasure’ is found in France.

Gurlitt Task Force Sides with Nazi Victim (Germany)
(15 August 2014, ArtNet News)
Two Riders on the Beach by Max Liebermann should be returned to the heirs of David Friedmann. The 88-year-old claiming it, who fled Germany at age 14 and whose parents died in Auschwitz, still remembers it hanging in his uncle’s house. There may be more Friedmann paintings in the Gurlitt lot.

Auron Tare, presion policisë për lirimin e trafikantit të amforave (Auron Tare pressured police to release amphora trafficker, Albania)
(14 August 2014, Rilindja Demokratike)
A foreigner was detained in Himara who was in the process of trafficking an a valuable ancient amphora which was taken off the coast. For whatever reason Auron Tare, director of the Coastal Agency, has allegedly pressured police to let the trafficker go. It then falls into allegations against Tare.

Renaissance masterpiece by Guercino worth £5m stolen from Italian church
(14 August 2014, The Telegraph)
The church had an alarm system but it wasn’t working because of lack of funds. VERY unfortunately this article speculates about an entirely fictitious Dr No looting-to-order set up. This doesn’t exist folks. Fiction.

Dinosaur footprints vandalised (UK)
(13 August 2014, Daily Mail)
More vandalism than looting, these fools poured plaster of Paris into prints in Wales and then couldn’t get it out so they smashed at it.

The Bizarre Story Of How The Original Poster For Jaws Went Missing
(15 August 2014, Gizmodo)
You read correctly. That’s it for this week folks.