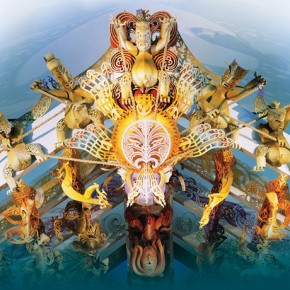 Five Māori wooden panels, stolen from Taranaki, have just been returned to New Zealand from the collection of the late George Ortiz. Unfortunately, a large ransom was paid for these spectacular pieces…pieces that were consigned to Sothebys in the 1970s to pay a $2 million USD ransom for Ortiz’ kidnapped six-year-old daughter. Every bit of this story is interesting and tragic, from the point where Māori displaced by the musket-fueled wars of the 1800s hide them in a swamp, through the six attempts made by the NZ government to effect their return, to paying Ortiz’ heirs several million dollars to get them back. Here is the story.

In 1819, the Ngā Puhi iwi, armed with European muskets, began a campaign against the other iwis of the North Island. Te Āti Awa iwi, which is ancestrally based in the Taranaki region, aligned themselves with Ngā Puhi against the Waikato iwi and won a major battle at Te Motu Nui (Motunui) in 1822. However, Waikato forces threatened to take the region, which forced four major migrations of Ngā Puhi-aligned peoples southward out of Taranaki.

During times of danger, usually impending raid, it was not uncommon for Māori groups to hide important panels and other carved works in nearby swamps (Dansey 1960). This practice served to protect these powerful and important pieces from being taken by enemies. At some point, either during the migrations southward following the battle at Motunui or in the lead up to the battle itself, a group of elaborate carved wooden panels, known to have been made before 1830, as well as other important ritual objects were deposited in a swampy area near Motunui. These panels were likely both created and deposited by Te Āti Awa. 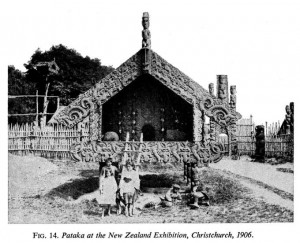 Many of the panels are thought to have lined the walls of a pātaka, a storehouse on stilts or a pole that was used to keep preserved food safe from rats (Te Ara n.d.). Both the outsides and the insides of pātaka were often decorated with elaborate carvings. Master carver Rangi Kipa explained that the reason that pātaka carvings were so elaborate was because of the importance of the structures: they essentially housed the collective wealth of the whole community in the form of provisions (Harvey 2014).

It is unknown why the pātaka panels and other hidden objects were never recovered by Te Āti Awa. During the unrest in Taranaki during this period, there was a significant amount of disruption of Māori life and living situations and thus many reasons why deposited carved pieces were not retrieved. Dansey (1960) postulates that knowledge of the panels buried at Motunui was either lost by the Māori who eventually returned to the area following their displacement, or that upon return, tensions with Europeans were such that it was considered best to leave the pieces where they were. No oral or written account exists of the deposition of the panels at Motuni (Dansey 1960).

On 19 January 1960, J. “Scotty” Kilpatrick and Maurice Topine were draining a swamp near the corner of SH3 and Otaraoa Road, Motunui, Taranaki when their ditch digger caught on a large piece of wood (Houston 1960; Puke Ariki 2012). The men were working on the property of a Mr. H.D. Pennington, only two miles from where a group of archaeologists were excavating at the time{1} (Houston 1960). Their find turned out to be an a Māori carved panel, thought to come from a pātaka, hidden during the displacements of the 1800s (Fleming 2012). Luckily the ditch digger wrenched the panel from the mud intact and it landed, with only minor damage, on the side of the ditch (Houston 1960). Kilpatrick and Topine immediately contacted authorities at the Taranaki Museum in New Plymouth (now called Puke Ariki) and the piece, now referred to as the Ngati Rahiri Taonga, has remained in that museum ever since (Houston 1960, Puke Ariki 2012).

A number of other panels and related finds were located both by members of the public and by archaeological excavations in the area. It is clear that the area was extensively occupied in the lead-up to the panels’ abandonment and that it was also the site of a major hiding event of cultural property that was meant to eventually be recovered by the Te Āti Awa.

In 1972 another chance find was made near the site of the first panel discovery in Motunui. A man, named in subsequent legal proceedings as simply ‘Manukonga’ and described as a ‘Maori tribesman’ (Lord Denning 1982){2}, was reportedly cutting a path through the swamp when he encountered another carved wooden panel. He would go on to recover five panels from this location, the tallest being approximately 1.5 m high (Harvey 2014; Lord Denning 1982). These panels are thought to be associated with the 1960 panel and may have been part of the same hiding event. Puke Ariki taonga curator Glen Skipper has noted that the carving styles of the 1960 and 1972 pieces appear similar, implying that they may have been carved by the same artist (Fleming 2012). It is thought that the 5 panels discovered in 1972 would have formed the back wall of the pātaka (Harvey 2014). 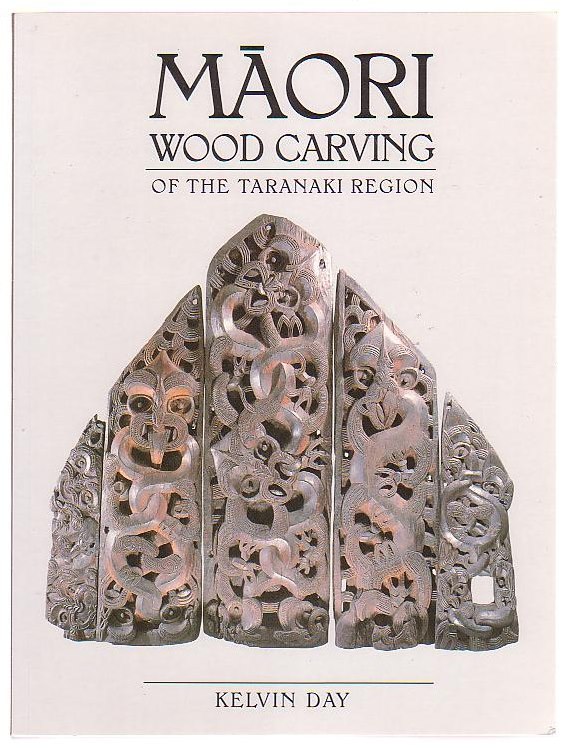 The 5 panels found at Motunui in 1972. Sadly I could not find a better photo but, really, they are amazing. 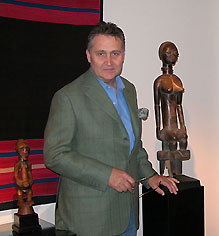 ‘Manukonga’ reportedly brought the panels to his home and the next year an English antiquities dealer named Lance Entwistle{3} viewed them there. Entwistle then bought the panels from ‘Manukonga’ for $6000 NZD (Lord Denning 1982; Fleming 2012). The dealer then removed the pieces from New Zealand, in violation of the law according to the New Zealand Government (Finlayson 2014; New Zealand n.d.), having taken them to New York via Auckland (Lord Denning 1982). 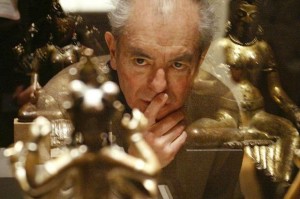 Entwistle contacted the well-known, controversial antiquities collector George Ortiz, who visited New York to view the panels (Lord Denning 1982). Entwistle allegedly told him that although the pieces had been exported from New Zealand without a permit, he was the owner of the objects and thus could sell them to Ortiz. Entwistle also reportedly offered provenance documents with the sale that were falsified (Finlayson 2014). On 23 April 1973 Ortiz purchased the five panels for $65,000 USD and sent them to his home in Geneva by air (Lord Denning 1982; Fleming 2012).

In 1978 Ortiz consigned and shipped the panels to London for a 29 June sale at Sotheby’s to raise money after having paid a ransom for his kidnapped 6-year-old daughter Graziella (Lord Denning 1982; TVNZ 2014). Graziella was returned after Ortiz gave the kidnappers $2 million USD, but the financial loss caused Ortiz to consign 234 items for auction under the title “The George Ortiz Collection of Primitive Works of Art” (Hauptfuhrer 1978).

After the panels were consigned to Sotheby’s, were valued at £300,000, and the catalogue was published, the New Zealand Governemnt formally sought their return, issuing a writ claiming ownership on 26 June 1978, three days before the sale (Lord Denning 1982). In response, the panels were withdrawn from the sale pending judgment. As the sale of the other items fetched $2.9 million USD, enough to pay for Graziella’s ransom, Ortiz indicated that he no longer wanted to sell the panels (Lord Denning 1982; Hauptfuhrer 1978).

In a 1982 case before the House of Lords to determine several preliminary issues, the Lords ruled that New Zealand’s Historic Articles Act of 1962 and the Customs Acts of 1913 and 1966 did not automatically vest the Crown with title to illegally exported artefacts (Lord Denning 1982). Of specific concern was Section 12 (2) of the 1962 act:

New Zealand argued, as Lord Denning (1982) paraphrased, that their 1962 act should be read as:

An historic article which has been knowingly exported from New Zealand in breach of this act shall be automatically forfeited to her Majesty, and Her Majesty can recover it in any other country into which it may be imported

an interpretation that Lord Denning believed infringed on various aspects of international law. The Lords determined that the Crown only acquired title if the object was seized, not if it was only illegally exported (Lord Denning 1982; New Zealand n.d.). This decision did not bode well for the subsequent court appeal. In ‘Attorney-General of New Zealand v Ortiz [1984]’ the English Court of Appeal determined that New Zealand’s claim should fail on the grounds that to return the panels would constitute enforcing foreign law (the previously-mentioned Historic Articles Act) in the UK (New Zealand n.d.).

In 2013 George Ortiz died and in March of 2014 New Zealand once again began negotiations to have the panels returned (Finlayson 2014). Representatives from the New Zealand Government and Te Papa (the national museum) traveled to Geneva to meet with the Ortiz children who stated that their late father had a desire for the panels to be returned to their country of origin (Finlayson 2014) {4}. It has been reported that the New Zealand government paid $4.5 million NZD to the Ortiz family for the panels’ return as well as some legal fees (Harvey 2014; TVNZ 2014) {5}.

In early July 2014, the panels were returned to New Zealand and to temporary storage at Te Papa (Harvey 2014; TVNZ 2014; Finlayson 2014). According to Christopher Finlayson, the National Party Treaty of Waitangi Negotiations Minister, the returned panels are ‘intended to be used for cultural redress as part of the Treaty settlement process‘, in other words they will be returned to the Te Āti Awa iwi for likely preservation at Puke Ariki (Finlayson 2014; Harvey 2014). 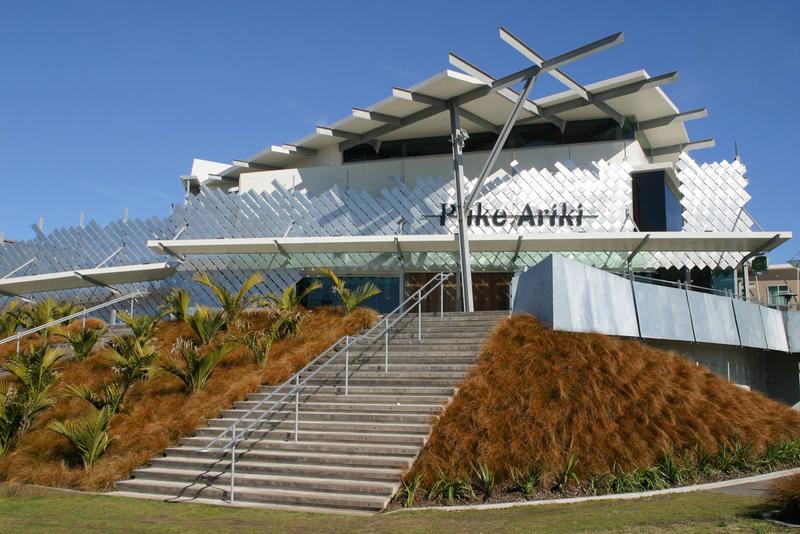 New Zealand (n.d.) ‘International treaty examination of United Nations Educational, Scientific and Cultural Organisation Convention on the Means of Prohibiting and Preventing the Illicit Import, Export and Transfer of Ownership of Cultural Property 1970 and Organisation for the Unification of International Law Convention on Stolen or Illegally Exported Cultural Objects 1995’. Report of the House of Representatives Government Administration Committee.

{1} This excavation was the product of two years of consultation with Māori groups in the area who had serious concerns about the search for deposited panels. The concern was summed up by a Te Āti Awa elder, Mr R. Watson, who told archaeologists “If the old people put the carvings in the swamp with the idea of some day recovering them, I say seek them and place them in the museum. But if they put them there for ever, I say leave them there for ever” (Watson quoted in Dansey 1960).

Archaeologists gave their assurances that the panels were deposited with the intent of future recovery and the contemporary press reported Māori participation in the excavations, but to what degree this decision was a consensus opinion should be examined.

{2} I’m rendering this person’s name in quotes because in reading the Lords’ decision you get the feeling that they pictured him as some sort of naked and wild Victorian idea of a savage, what with the use of the word ‘tribesman’ and the publishing of only one name without even so much as a ‘Mr’ before it. His name almost certainly wasn’t just ‘Manukonga’. That was either his surname, or his full name was actually Manu Konga. Something like that. Or, who knows, Entwistle could have just been spouting a random name. Anyone in Taranaki who knows/knew this guy, please get in touch with clarification.

{4} One wonders, then, why Ortiz didn’t just hand the panels back in the 40 years he had them in his possession.

{5} Hungary recently paid out for the return of the looted Sevso Treasure. I find the idea of the victims of cultural property theft being forced to pay massive sums for the return of their stolen heritage to be sickening. It is really only an option for developed countries that have the cash (like New Zealand and Hungary), and, even then, is limited to a few items here and there. This is not a solution to the problem, it is ransom.