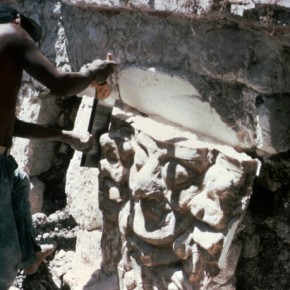 This year I am in the Central American jungle conducting fieldwork on artifact smuggling in Belize. On last year’s day of archaeology I was 3700 feet above sea level, studying the looting of Andean churches.

This post was written for the Day of Archaeology 2014.

[The image above shows the looting of a large Maya temple front at the site of Placeres, Mexico: it is literally being sawed off. Read about the looting and trafficking of this facade on the Trafficking Culture website. Photo by permission of the person who took it.]

This job is exciting to say the least

Although I am an archaeologist by training (I have a trowel and I know how to use it), I do something a bit different. I am a researcher on Trafficking Culture, a multidisciplinary research project focused on researching the transnational criminal trafficking of looted and stolen cultural property. In other words, while many archaeologists work to reconstruct the past, we work make sure that there is a past left for them to reconstruct. The looting of archaeological sites and the trafficking of stolen antiquities is big business and my team is studying how to disrupt these criminal networks. I am based at the Scottish Centre for Crime and Justice Research at the University of Glasgow. I’m an archaeologist in a criminology department.

Recently our project’s work in Cambodia has received much media attention, thanks to an article on the National Geographic site and a paper in the British Journal of Criminology (available for free for a limited time). My colleagues Simon Mackenzie and Tess Davis were able to reconstruct two criminal networks that stole Khmer art from jungle temples and moved them across borders and on to the market. One at least was tied to the Khmer Rouge. Many supposedly-reputable dealers, collectors, and museums bought these blood antiquities.

We want to study more of these artefact trafficking networks. That is why I am in Belize: to learn the who, what, when, where, and why of the devastation of the massive, jungle-covered ancient cities of the Maya by antiquities traffickers.

Almost every Maya site has been looted

The ancient Maya were an artistically, culturally, and scientifically advanced civilization located in parts of what is now Mexico, Guatemala, Honduras, El Salvador, and, of course, Belize. They charted the movement of Venus, had a complete written language, and built cities that housed 10s of thousands of people. The remains of their massive temples are other-worldly: they stick up over the canopy of the jungle. From the temple tops, you can watch monkeys, toucans, and scarlet macaws going about their business below between the swirls of morning mist.

We’ve known about the ancient Maya for a long time. Formal archaeological excavations began in the region in the late 1800s and many many ‘lost cities’ were recorded by archaeological pioneers who braved the green uninhabited expanse, slinging their hammocks on ruins as they went along. There was not an international market for Maya artefacts, however, until the late 1950s and early 1960s. Collectors and museums went wild for the complex iconography of Maya carved stone statues (usually called stelas) and fell in love with the delicate, masterful scenes painted on Maya pottery. That it was illegal to buy, sell, and export Maya artefacts from their countries of origin was immaterial. The law rarely stops very rich people from getting what they want and what they wanted was the ancient Maya.

Almost every known Maya site (and many sites unknown to archaeologists) has been hit by looters. Archaeologists are often left cleaning up the tattered remains left as a supply of artefacts was found to meet the demands of artifact-hungry collectors and museums. Once-intact temples have been cut nearly in half to access the artefacts within. Many have collapsed, destabilized by looting tunnels. Archaeologists find once-beautiful carved stela mutilated by looters: “thinned” with power tools to make them easier to transport or broken into bits, with only the prettiest carved sections taken for the international market. Archaeologists find once-sealed Maya tombs empty and bare with human bones smashed or pushed aside. Any Maya pot or jade piece you see in a museum almost certainly came from a tomb. There is a very good chance it was looted as well. And relatively recently.

We’ve lost so much information about the Maya to the illicit antiquities market. I am out to figure out how this happened and what we can do to prevent it from happening again.

My day of archaeology

Having finished up some initial work in Belize City, I will ride an old American school bus north along Belize’s Northern Highway to the town of Orange Walk. There I will stop in to the town museum which houses artefacts from a number of nearby Maya sites to speak with museum workers about looting and trafficking of antiquities. Hopefully this will generate some local leads: we’ve found that people involved in antiquities trafficking in the past are often willing to talk about it.

I am very interested in what we call ‘parallel’ trafficking networks: illicit objects that are smuggled alongside antiquities in the same areas. Along Belize’s borders with Guatemala and Mexico rare plants and animals, arms, drugs, and people have been trafficked, as well as antiquities. I am going to (safely) see if anyone around those parts is willing to tell me some stories about this.

Next I plan to move a bit further afield. I plan on visiting some of the heavily looted Maya sites along Belize’s northern border with Mexico. These sites are very difficult to get to, but several archaeologists working the area have kindly invited me into their camps.

This trip is an emotional one for me. As I say in this post on my blog, Anonymous Swiss Collector, I first found myself face-to-face with the devastating effects of looting while working in Belize and Guatemala in 2003. It was then and there that I devoted myself to this issue and my life has never been the same. A BA, MPhil, PhD, and post doc later, I am still working to protect and preserve the Maya sites that I fell in love with. This will be my first time back to Belize in over a decade.

I think that the only way to prevent looting at archaeological sites is to disrupt the criminal networks that bring these items to the market. To do that, we have to understand those networks. Hopefully this fieldwork will shed new light on a very dark chapter in the archaeological history of Central America.