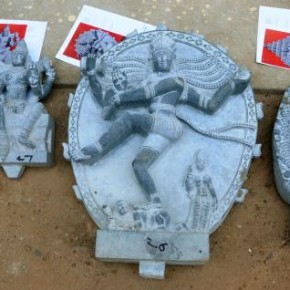 Hot this week: Hard to tell from Belize. A truncated try at a newsletter from the field.

What Happens When an Artist’s Own Work Is Stolen
(15 July 2014, Huffington Post)
“I hadn’t any insurance on my art, because I couldn’t afford it”

The museums turning culture into a commodity
(15 July 2014, Spiked)
Trade people often cite ex museum objects as a source of ‘legit’ and ‘licit’ antiquities, yet even these items are considered tainted, albeit in a different way.

See No Evil: Is Missing Artwork Sitting Inside Secure Storage Facilities?
(16 July 2014, Gallerist)
An article that goes over recent raids/seizures/etc from art storage facilities. What looted artefacts and stolen art do they contain? Yes, yes, The Goldfinch plot.

Three Subhash Kapoor figures remain on display (Australia)
(13 July 2014, The Australian)
The National Gallery of Australia is still displaying some idols bought from big time antiquities smuggler Subhash Kapoor. Are the dodgy too? Seems likely so we’ll see what happens there.

Brazil fights cultural heritage trafficking
(15 July 2014, Infosur Hoy)
Focused on sacred items looted from churches. Also a museum exhibit of such items has been opened called ‘Recovered Heritage’. These recovered items came from Brazilian churches but it unclear which ones as they were never inventoried. Seriously: inventory, inventory, inventory!

Agreement aims to protect North Shore wrecks from looters (Canada)
(20 July 2014, CBC News)
Archaeologists and police are teaming up to protect shipwrecks in the St. Lawrence. Stories of looters with dynamite and jackhammers.

Vietnam’s government to advance cash to pull royal rickshaw home
(15 July 2014, Thanhnein News)
The piece isn’t looted and seemingly not trafficked, but the government and donors are paying for it to be returned.

Weary Heracles popular in its home after repatriation (Turkey)
(15 July 2014, Hurriyet Daily News)
I and many others never saw they would see the day that the Museum of Fine Arts, Boston, would return the looted and trafficked top half of the Weary Heracles. Over 400,000 people have visited him in Turkey. Hooray!

Campaign for missing Zeugma mosaic pieces (Turkey)
(20 July 2014, Hurriyet Daily News)
An online campaign to get the rest of these very looted and trafficked pieces home.

Greek Culture Ministry Will Work with Interpol to Trace Artifacts
(14 July 2014, Greek Reporter)
This article concerns about 100 items taken during WWII and the Civil War.

Judge Orders Art Thieves To Pay $26 Million (Netherlands)
(14 July 2014, ArtNet News)
This is the Kunsthal theft. Somehow I doubt that cash will materialize.

Mayfair hails convicted faker John Myatt as a genuine artist with new exhibition
(13 July 2014, The Independent)
Hmm. Was a 12 month prison sentence worth getting some traction as a legit artist? Is there a risk that counterfeits will enter the market at a later date?

Sixty-seven giant snails seized at LA airport
(16 July 2014, BBC News)
Look, you can’t bring dozens of giant African snails into the US, even if you declare them.

World famous rocks are stolen
(17 July 2014, Colraine Times)
Fossil-hunters have removed 16 pieces of rock in a raid at Portrush National Nature Reserve. They are likely to have contained ammonite fossils.