Words of semi advice to students.

Sometimes everything is bad but the sun is shining and you feel great. Bolivia 2013

I have just participated in a workshop entitled Doing Fieldwork in Latin America at the University of Glasgow. I was called an ‘established researcher’ which I felt was artful and undue commendation (accepted!), and was asked to speak about my past fieldwork experiences for a group of postgraduate students, all of whom were either about to embark on fieldwork or had just returned. I am very glad I participated. I clarified my own thoughts, but I am not sure how much I helped them.

By chance, I was the last person to speak, which was good. I was the closest, career wise, to these students (having had my PhD for 2 years last week), and am holding a postdoctoral fellowship they probably all want. It was good for me as well as I hadn’t prepared any formal comments and was able to just reflect on my own past in light of what everyone else said.

It occurred to me that I had two things to tell the students, one quite positive, one quite negative. I only spoke about the positive point: there is nothing they can do about the negative one

Positive: You can really screw up and still have a career 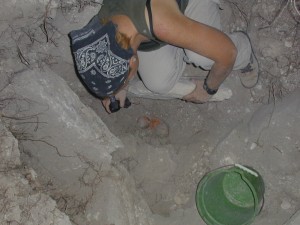 Me discovering an elite Maya tomb in Guatemala at age 20 right before the magical realism really hit the fan.

With the death of Gabriel Garcia Marquez, I was reflecting on my first reading of One Hundred Years of Solitude in the jungle in Guatemala in 2003. In that setting the magical realism in the novel was thoroughly believable: my own situation was that absurd. Petty dictators (related to more important, novel-worthy dictators); discovery of elite Maya tombs; foraging in the jungle for guavas because we didn’t have enough food; lightning strikes and volcanoes; watching rural Guatemalans be treated like beasts with no power to change anything; antiquities looting and jaguar poaching; eating moths out of the air, flesh eating diseases, dysentery; young romance in a looted tomb with bats overhead, quitting and getting fired in the same moment. I digress.

My going away party in Guatemala after quitting/getting fired. Yes we were drinking cough syrup.

Suffice to say that I can’t seem to go ‘to the field’ without the government being overthrown or everything just going to pants. But I still seem to have a career. I am still someone that they asked to speak. Which means that all of the advance worry that the students are experiencing is understandable but unneeded. It is better for them to expect everything to go wrong in some unimaginable way; to make peace with this eventuality so that they can salvage their work.

As I was speaking to them I realized that I have been very good at giving up when things go horribly wrong. Giving up is good! By this I mean that faced with unpredicted terrible, I let go of whatever I thought I was supposed to be doing and opened myself up to the experiences came my way. In Guatemala, as mentioned above, I quit/got fired and as I was leaving someone said “You don’t need this crap, come to Bolivia with me.” So I did. 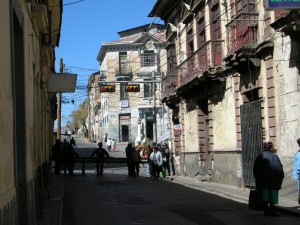 It was probably unwise to stay on the same street as the presidential palace while the government was being protested out.

In Bolivia, when my archaeological fieldwork was halted due to two bouts of major political unrest (that caused the toppling of the government and, 6 months later, the election of the country’s first Indigenous president) I mostly stopped thinking about the archaeology I wasn’t doing. Instead I started observing this amazing social situation that I knew absolutely nothing about. A few years down the line I did a PhD on the cultural aspects of that very social situation using information I gathered on the topic when my real fieldwork was floundering.

Thus I told the students to be honest with themselves if things are going bad, and be open to other options. Don’t have a set ‘Plan B’, but experience everything that comes their way as a possible ‘Plan B’.

Which brings me to my next thought:

The keynote speaker of the event, a well-known Latin American anthropologist, mentioned two things that made his initial fieldwork a success:

Sure the country was on fire and we were preparing to flee the village, but that doesn’t mean I couldn’t reenact llama herd behaviour.

In other words, he had early experiences of living away, outside his culture, without all of the theoretical and methodological baggage that PhD students seem to have. He also had time to screw around, get comfortable, learn the language, and what have you before producing research. The other ‘established researchers’ had similar stories.

It hadn’t really sunk in until that moment that my own trajectory is quite different from many of these students. With notable exceptions, these postgraduates are conducting fieldwork for the first time as part of their PhD. It may be their first experience away from their home culture for anything other than holiday travel. I spent a total of about a year in Latin America ‘conducting fieldwork’ before I even started my masters degree, let alone my PhD. I first showed up in Central America at age 20 with a tent and a hammock and without fear. I followed opportunities. There was no consequence. There was little time restriction or financial pressure because I was young. If I had food provided, I was good. At times I felt quite directionless, but in retrospect, I realise that being directionless is how one finds direction. 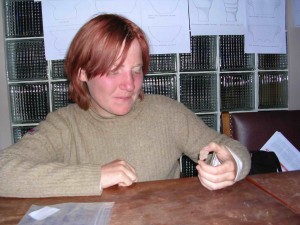 Worst sunburn of my life after sneaking into Bolivia while the borders were blockaded on a one-engine motor boat across Titicaca. Some guy I met at 4am told me to do it…

Even during my PhD I never had to go through ethics approval for fieldwork (yes, you should be shocked, this was 2007), and after 3 years of tuition (which I had a scholarship for), my University charged no more tuition (that may have changed). I could be a PhD student until I was done and not pay for it. The students at the workshop are nearly forced to finish their PhD in less than 4 years, while seeking ethics approval for all things, and paying for it all. While all of the ‘established researchers’ were telling them to ‘just get on with it’ and essentially saying that success comes with extended periods of screwing around and getting drunk in the plaza night after night, the students were no doubt thinking that such wandering just isn’t an option for them. It probably isn’t.

I worry about students who haven’t flopped around a bit,[1] if for no other reason than their truncated postgraduate experience is so very different than that of their supervisors’ experience. How can we effectively advise them?

This isn’t quite advice 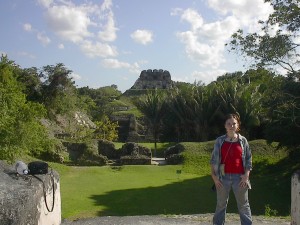 There was no reason not to be directionless in Latin America at age 20.

It is probably best to put in some time in the real world before you start your postgrad if you imagine your postgrad will involve any sort of fieldwork. At a point in your life where you have little in the way of obligation, when you are young and fearless, go to the developing world and work for your keep for a while. Break even and observe the things around you. Learn the language. Get used to the rhythm of life and get used to spectacular disasters. THEN apply for a PhD. You’ll look like a better candidate for funders and, really, you will be a better researcher.

This is probably good fieldwork advice to students as well. Me in Bolivia, 2005.

I don’t know what to tell you. I’d love to hear about your experience of all of this. It will help me help others in the future.

1. I am happy to say that all of our project’s postgrads came to us with fieldwork experience under their belt. They are great. I have full faith in them!