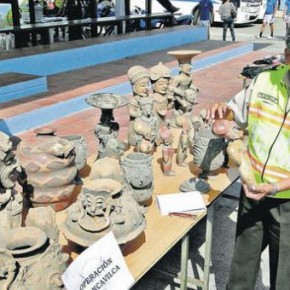 Anchor stolen from Subic shipwreck retrieved (Philippines)
(26 May 2014, Inquirer)
Several items from a Spanish galleon shipwreck have been recovered including a 7 foot anchor. 5 men were arrested and have posted bail.

Controversial Indian ring auctioned at Christie’s
(22 May 2014, BBC News)
Ring allegedly taken from the slain body of Tipu Sultan at the end of the 1799 Srirangappattinam battle. Various groups urged Christies to halt the auction but it went through.

Looted Ancient Bhima Statue Arrives Back in Cambodia
(29 May 2014, The Cambodia Daily)
The ancient statue looted from Koh Ker and held in the Norton Simon Museum for decades has officially returned home.

Smugglers Thrive On Syria’s Chaos, Looting Cultural Treasures
(27 May 2014, WAMC)
A 4 minutes radio piece on the situation in Syria.

As Syria’s war rages, this cradle of civilisation is plundered(26 May 2014, The National)
More on Syria.

Project aims getting Urartian works back (Turkey)
(28 May 2014, Hurriyet Daily News)
University in Van has made a catalogue of 200 Urartian artefacts in foreign museums that they hope to have returned.

Egypt steps up fight against antiquities thieves
(30 May 2014, BBC News)
Short news spot interviewing Monica Hana about looting and Ali Ahmed about the recovered artefacts now on display in the Egyptian Museum.

Egypt’s Looted Antiquities
(30 May 2014, The New York Times)
An op-ed by Erin Thompson

Egypt turns to technology in effort to protect ancient treasures from looters
(1 June 2014, The Guardian)
Mostly info that has been published elsewhere before this.

Egyptian Tomb-Robbing Market Explodes on eBay
(31 May 2014, The Daily Beast)
As I usually say, why isn’t this article demonising eBay as a vector for these illegal sales? Why is it always the archaeologists’ fight against sellers, ignoring the medium? Ebay could swiftly ban all antiquities sales, but it doesn’t. That is the story.

Dangerous detention for Americans in Honduras
(31 May 2014, Click On Detroit)
Employes of the commercial salvaging company Aqua Quest International have been arrested in Honduras on illegal weapons charges. They were salvaging historic mahogany logs which still have commercial value.

Saquean Chacanbacán (Chacanbacán looted; Mexico)
(29 May 2014, Diario de Quintana Roo)
Reps from Mexico’s INAH say that the tourism company Explorean Kohunlich are encroaching on the site of Chacanbacán and this may be causing looting.

A Pastor’s Holy Mistake: Selling an Art Forgery (USA)
(20 May 2014, The Daily Beast)
A Florida pastor discovered his Hirst paintings were fake but sold them anyway.

Nazi war memorabilia stolen from Washington museum (UK)
(30 May 2014, Sunderland Echo)
Thieves stole an Iron Cross and a pilots jacket from the Luftwaffe exhibit by just unscrewing the case

For years I have argued against holidays and giving back the Elgin Marbles. I was wrong about both (Greece/UK)
(30 May 2014, The Independent)
An opinion piece by Howard Jacobson

Recovering lost Torahs of Hungary
(27 May 2014, The Sun Sentinel)
Piece on Rabbi Shlomo Koves who is seeking the return of item taken from Hungarian synagogs during the Holocaust.

Painting that stole a boy’s heart – then wrecked his life (France)
(1 June 2014, Telegraph)
A piece about Patrick Vialaneix who claims to have become obsessed with the Rembrandt painting Child with a Soap Bubble and, as an alarms tech, stole it in 1999.

‘Stolen’ treasure trove goes on show in Spain
(30 May 2014, The Local)
Following a 5 year legal battle, Spain won the silver treasure of the Nuestra Señora de las Mercedes wreck from the commercial salvage firm Odyssey Marine. Spain (and this blogger) consider the items to be looted.

Are felonious fossil fanciers plagued by an ancient curse? (USA)
(27 May 2014, Desert News)
We can only hope they are!