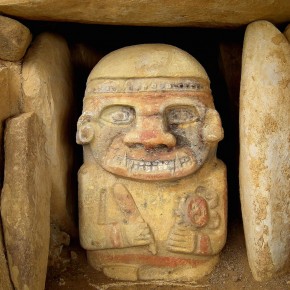 Hot this week: The MFA Boston returns (a very small number of) objects to Nigeria.

Field Museum to return Aboriginal Tasmanians’ skulls to descendants
(24 June 2014, Chicago Sun Times
Few groups have been worse treated by the rest of the world than Aboriginal Tasmanians. As recently as my undergraduate education, they were being touted as the model primitive…the people who actually ‘lost’ culture and technology. I’m pretty horrified thinking about it. Chicago’s Field museum is returning these skulls which were almost certainly stolen for ‘science’, meaning to further this idea.

‘Looted’ Nigerian art returned to traditional ruler
(23 June 2014, Ahram Online)
Despite all the arguing and weird press coverage, these stolen Nigerian objects have been returned from the UK.

Museum of Fine Arts returns 8 artifacts to Nigeria
(26 June 2014, The Boston Globe)
Some of these guys were stolen as recently as the mid 1970s out of a palace. Many fancy words about provenance research and return but, seriously, if the MFA would like a list of items in their collection that were brutally and destructively stolen from their country of origin (and stolen AFTER 1970, as if that matters), I’d be happy to oblige them. *Cough November Collection Cough*

The mask of no return? (Egypt/US)
(26 June 2014, Al-Ahram)
Yeah we should all be pretty miffed over the Ka-Nefer-Nefer mask fiasco.

ISIS Cashing in on Looted Antiquities to Fuel Iraq Insurgency (Iraq)
(26 June 2014, National Geographic)
The big news story of the week. Everyone be cautious about this one. One week ISIS is smashing antiquities, the next week they are at the centre of what seems like an impossibly massive amount of money coming from antiquities sales.

How Terrorists Tap a Black Market Fueled by Stolen Antiquities (Iraq)
(23 June 2014, NBC News)
Similar to the above story with quotes from Sam Hardy and Jason Felch so worth a read.

Imagery of Archaeological Site Looting (Syria)
(n.d., US Bureau of Education and Cultural Affairs)
Satellite images hosted on a US Govt Website. Worth a look.

US House: Turkey must return Christian properties (Turkey/Cyprus)
(27 June 2014, Cyprus Mail)
“The Committee on Foreign Affairs of the US House has passed the Turkey Christian Churches Accountability Act (HR 4347), introduced by Chairman Ed Royce, which requires an annual report from the State Department on the status of stolen, confiscated or unreturned Christian properties in Turkey and in the north of Cyprus.” This, of course, includes cultural property/properties.

A trove of looted artifacts, five years after BLM raids in Utah
(29 June 2014, Salt Lake Tribune)
The Bureau of Land Management has been caring for over 6000 looted objects seized in raids for years now. Eventually the objects will be repatriated. The article rightly notes that ” their scientific value has been hopelessly compromised”, because they were looted.

Nazi-Looted Painting to Remain in Florida Museum Collection
(27 June 2014, ArtNet News)
The Cummer Museum of Art and Gardens in Jacksonville will keep the Dutch Golden Age painting after buying it from heir.

Feds Seize Pre-Renaissance ‘Madonna’ (US)
(24 June 2014, Courthouse News)
This piece was seized after being consigned for sale at Sotheby’s. It appears to have been stolen from a Swiss safe deposit box in the 1980s.

Law to Impose Tough Limits on Sales of Ivory Art (US)
(20 June 2014, New York Times)
Controversial new New York State law bans the import and sale of all ivory items “unless an item is both at least 100 years old and consists of less than 20 percent ivory”, except in the case of musical instruments. Thus, antiques an antiquities that are over 100 years old (or over 1000 years old etc), cannot be sold if they are more than 20% elephant or mammoth ivory of rhino horn.

Art Appraiser Pleads Guilty in Ivory-Smuggling Scheme (US)
(24 June 2014, Voice of America)
And this is why (see above). People really do make fake antiquities out of modern ivory so the New York State law, although harsh, has at least some logic to it. Texas-based appraiser smuggled elephant ivory and rhino horn to Hong Kong where it was made into fake antiquities.

Spain to return Colombian treasure seized from drug gangs
(24 June 2014, BBC News)
691 pieces being returned to Colombia after having been seized in Spain 11 years ago from a man who allegedly has ties to drug cartel money laundering. Take some of this with a grain of salt. At the very least, the $7m USD estimate for these items seems absurd based off of what I have seen in the photos and my (extensive *sigh*) experience with the South American antiquities market. Unless the have a pile of gold masks that they can are authentic, no dice.

Colombia intenta recuperar su memoria histórica (Colombia hopes to recover its historical memory)
(29 June 2014, La Nación)
Story of the recovery of some amazing San Agustín statues from Denmark and hopes that more will be returned.

Call for expert panel to scan masters’ art (India)
(29 June 2014, Times of India)
A panel of experts is being created so that fakes in the style of the Bengal school don’t pass into the market.