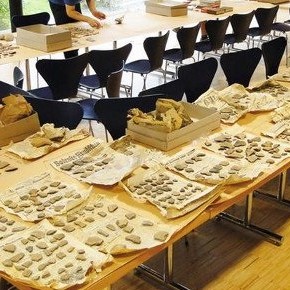 Hot this week: Benin objects back to Nigeria (with a bit of argument)

‘Smoking Gun’ Ancient Coins Are Being Looted from Excavations — and Too Few Coin Scholars Are Firing Back, Baylor Expert Says
(16 July 2014, Baylor University Press Release)
Profile of Dr. Nathan Elkins who criticizes the lack of criticism of looted coins. He just published ““Investigating the Crime Scene: Looting and Ancient Coins” in the Biblical Archaeology Review…which I’d love a copy of if any of you have it.

Nigeria pays over $1m to 37 antiquities vendors
(16 June 2014, Agence de Presse Africaine)
This fund is meant to enlist the help of antiquities sellers in the fight against the illicit trafficking of Nigerian cultural objects. The article is short and there is no clear explanation of this scheme.

Why Trafficking Of Antiquities Will Continue (Nigeria)
(20 June 2014, Leadership)
A bit more on the previously mentioned scheme.

Briton returns looted Benin artefacts after 177 years
(21 June 2014, Punch)
And the Oba encourages anyone else holding looted cultural objects to return them.

Egypt, Hungary probe restitution of 3 artifacts
(16 June 2014, Egyptian State Information Service)
A meeting was held between the Egyptian Antiquities minister and the Hungarian Ambassador to Egypt to discuss the return of several recently stolen artefacts found to be on display in Hungary. Also a possible cultural property bilateral agreement between the two countries is being discussed.

Egypt’s new antiquities minister optimistic in face of obstacles
(17 June 2014, Ahram Online)
Short piece on Mamdouh El-Damaty who has his work cut out for him.

Archaeologists discover Tiwanaku tomb in southern Peru
(16 June 2014, Peru This Week)
It was previously thought that the Tiwanaku culture (which is the culture I have worked most on) didn’t expand so close to the Peruvian coast. This site was previously unknown to archaeologists but it was known to looters: the tomb was looted long before archaeologists got there.

Sweden returns pre-Incan funeral shroud to Peru
(16 June 2014, Times Standard)
[Note to everyone reading, “Incan” isn’t a word so never use it. It is “Inca” in all cases even possessive or plural. Actually I think it is “Inka” but that is less important] The first of the 89 smuggled Paracas textiles that have been in Sweden for decades has been returned. The others will trickle back after they are stabilized. They have suffered greatly from poor storage and display decisions in Sweden over the years.

Peru displays pre-Inca shroud returned from Sweden
(16 June 2014, BBC News)
Same story but with a video of the return.

Peru increases efforts to recover stolen artifacts
(16 June 2014, Peru This Week)
This article has various internal seizure numbers and repatriation numbers so worth a read.

How does repatriation of Peru’s stolen cultural objects work?
(20 June 2014, Peru This Week)
When nearly 50,000 pieces of cultural heritage are returned to a country in 9 years, what exactly does that country do with all of them? This article makes the mistake of thinking that the Moche octopoid headdress recovered in the UK was in the possession of a UK citizen, thought, which is not really checking their sources.

Non-Profit Seeking Partnership To Fight ‘Unbelievable’ Piracy (Bahamas)
(16 June 2014, Tribune 242)
A proposed group called the “Blue Heritage Association” and made up of commercial salvagers aims to work with the Bahamas government to stop what the group is calling piracy: unlicensed looting of shipwrecks. However there is currently a halt to all commercial salvage licenses in the Bahamas because, presumably, various people consider even licensed commercial salvaging to be piracy of fragile underwater heritage.

Hobby Lobby’s Green Family Building Biblical Museum (US)
(16 June 2014, Breitbart)
People like this do not deserve the luxury of kind words over false philanthropy. This woman-hating fanatic is banging up a Bible museum to house his trove of questionable ancient treasures. He obsesses over the provenance of his female employees’ sexual organs, but shows less concern over his collection’s sordid past.

2 art dealers sue seller who they say lost their $3M Degas sculpture (US)
(18 June 2014, New York Daily News)
An unbelievable story. This seller just left the Degas and other items in what appeared to be an empty house without getting money from ‘buyer’. The buyer, of course, turned out to be a twice-convicted felon with no assets. An interesting case of a seller not even bothering to perform ‘due diligence’ on their buyer.

Returning Duryodhana (Cambodia)
(Winter/Spring 2014, Bostonia)
A long feature with text, video, and photos about looting and repatriation in Cambodia by my colleague Tess Davis.

Public participation provides fillip to Kerala’s antiquities research (India)
(18 June 2014, The Hindu)
Project to convince people to share the antiquities in their possession with the authorities without fear of prosecution etc.

Nazi-Looted Porcelain Returned by V&A Museum Now Up for Auction (UK)
(16 June 2014, ArtNet News)
Bonhams is selling porcelain from the collection of Emma Budge. The pieces were forcibly sold by the Nazis in 1937 and a number of them were returned to heirs who now appear to be selling them.

Some advice for treasure hunters and culture ministers (UK)
(17 June 2014, The Conversation)
A piece by another Leverhulme Early Career Fellow: Julia Farley at the University of Leicester.

Duke could be sued over Drumlanrig da Vinci theft (Scotland)
(20 June 2014, The Scotsman)
The Duke of Buccleuch says that he did not authorize an investigator to offer a guy a ransom for a di Vinci stolen from the Duke’s castle. The guy, who allegedly facilitated the return of the piece, wants said reward. A complicated case.

€100k stolen art haul found in Dublin house is put on display in appeal to owners
(21 June 2014, Herald)
Pieces were stolen in the 1980s and 1990s. Police think many of the owners don’t even know their paintings were stolen because they were replaced with replicas. Painting owners are urged to have a look at what is there.

The amazing story of a 4,000-year-old necklace found in a dumpster (Ireland)
(20 June 2014, News Next)
I’ve heard this story before but it always seems pretty interesting. I am sure the thieves were surprised what they ended up with.

Tapestry looted by Nazis to be returned to French chateau
(18 June 2014, Telegraph)
Stolen from the Chateau de Versainville in Normandy during the occupation of France and shipped to Germany. Bought by the University of Sheffield in 1959 and now returned.

Germany Returns Ancient Greek Artifacts Stolen by Nazis
(19 June 2014, The Greek Reporter)
A large collection of very very small pieces that were transferred to Germany during the occupation of Greece.

Frieze stolen from famed Florence church
(16 June 2014, The Local Italy)
19th century wooden frieze stolen from the Santa Croce church over the weekend then abandoned. This is the burial place of Galileo, Michelangelo and Machiavelli.

Iraq Archaeological Sites Threatened by Insurgents
(6 June 2014, Liberty Voice)
A headline from the past today. Sad. A bit of a mention for the Trafficking Culture project at the bottom (without actually saying our name)

Controversial Lenin Death Mask for Sale in U.S.
(16 June 2014, The Moscow Times)
Sculptor’s family say it is illegal. Others say it is a fake.

Online Trove of Haring and Warhol Works Fake, Experts Say
(19 June 2014, ArtNet News)
If you find a trove of dirt-cheap Warhols, you will be getting what you pay for.

Thieves steal Royal Botanic Garden Edinburgh plants to sell on eBay (Scotland)
(19 June 2014, BBC News)
I think that rare plant theft from Botanic Gardens IS museum theft. We should talk about it as such.