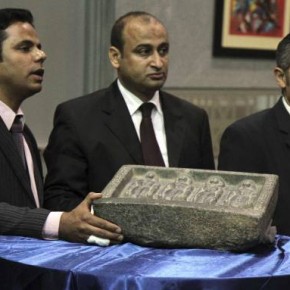 Selling a Fake Painting Takes More Than a Good Artist
(2 May 2014, The New York Times)
Discusses how structural elements of the present art market and legal regime that ‘governs it’ is related to the production of fake paintings.

Inside the Cold War in the Desert (Western Sahara)
(29 April 2014, Vice News)
Includes offhand accusation that MINURSO ‘peacekeepers’ have been looting desert sites for antiquities.

Three Ancient Egypt artefacts to return from Germany
(28 April 2014, Ahram Online)
Three Egyptian objects seized in 2009 at Stuttgart Airport on their way to Belgium are being returned Egypt.

Many looted Egyptian artifacts go first to Israel, Switzerland
(28 April 2014, Al-Monitor)
An article that cites what I can only say are unsupportable figures for the ‘value’ of Egyptian antiquities smuggled since 2011. Quite large and no source of info cited. I can’t imagine a source being possible. Otherwise about a possible antiquities MOU between the US and Egypt.

10 artefacts stolen from the Egyptian Museum recovered (30 April 2014, Ahram Online)
Undercover agent meets with head of smuggling gang in Cairo. Recover 10 pieces from the museum. Included is a statue of Tutankhamen and ushabtis of Yuya and Tuya. At this point 44 out of 54 stolen museum items have been returned.

Controversial security walls help protect Egypt’s antiquities
(30 April 2014, The Art Newspaper)
Pre-2011 security walls were built at some Egyptian sites. This article implies that because there are no security walls at Deir el-Ballas, it got looted. I am not convinced. Does discuss a recent theft at the Open Air Museum in Luxor and a gang trying to sell artefacts at Faiyum.

Egypt’s History Is Being Lost to Criminals
(30 April 2014, Huffington Post)
Tess Davis and Blythe Bowman discuss recent cases of looting and trafficking of Egyptian cultural objects and advocate for a Memorandum of Understanding between the US and Egypt.

The Dancing Shiva fiasco should shift attitudes in Australia
(29 April 2014, The Conversation)
Robyn Sloggett of the University of Melbourne asserts that the looted idol scandal should force Australia to re-assess acquisition policies.

Canberra gallery gives up claim on stolen idol
(30 April 2014, The Hindu)
As you probably know, the National Gallery of Australia has accepted the Indian claim of ownership of a Chola-era Nataraja that they paid $5.6mil for. It was stolen from a temple in Tamil Nadu and smuggled by disgraced dealer Subhash Kapoor.

India stone-faced on US offer to return stolen Buddhist idols
(29 April 2014, The Times of India)
Makes the odd claim that the US is trying to return stolen idols but India is not interested. Grain of salt.

Shiva’s return ups Kapoor heat (India)
(3 May 2014, The Australian) (Paywall)
Upcoming return of stolen ancient statue from National Gallery of Australia should have an effect on the trial of its smuggler.

Ancient treasures return home (Cambodia)
(28 April 2014, The Nation)
Successes in the return of looted Cambodian sculpture with hope that these returns will inspire returns to other countries.

Priceless treasures returned to Korea
(30 April 2014, Arirang)
Transcript of a news segment about the US return of Joseon Dynasty seals that were taken by US soldiers.

S. Korea court rejects suit seeking return of statue to Japan
(2 May 2014, Global Post)
This is quite an interesting case. A Korean statue is in Japan, it is stolen by Koreans and brought to Korea for illegal sale. It is seized, but then it is kept in Korea because it is asserted that Japan shouldn’t have it in the first place.

Iran police finds painting attributed to Pablo Picasso
(29 April 2014, PressTV)
Iranian police seize a supposed Picasso on the border between Iran and Azerbaijan. Smugglers were attempting to sell it for $900,000.

Turkey continues hunt for historic artifacts abroad
(2 May 2014, Hurriyet Daily News)
A Culture and Tourism Ministry lists the objects in foreign collections that it attempted to have repatriated last year.

Cyprus and Georgia to enhance cooperation on cultural heritage
(29 April 2014, Financial Mirror)
A meeting was held in Nicosia between relavent ministers of Georgia and Cyprus concerning the implementation of a cultural property protection Memorandum of Understanding between the two countries.

Czech Court Rejects Jewish Family’s Restitution Claim
(3 May 2014, Israel National News)
Heirs will not get a collection of artworks that were seized from a Jewish-owned button factory in 1939.

Turkey renews claim for long-lost head (UK/Turkey)
(2 May 2014, The Art Newspaper)
Turkey has renewed its claim to the marble head of a Eros now in the Victoria & Albert museum. The head comes from the Sidamara Sarcophagus, which is in Istanbul, and was sold in London in 1883. The V&A indicates that they would be willing to send the head to Turkey on ‘long term loan‘.

Northampton museums could face funding cuts if town sells ancient Egyptian statue (UK)
(3 May 2014, The Northampton Chronicle)
The Arts Council threatens to revoke Northampton Museum’s accreditation if it sells an ancient Egyptian piece, saying that it is against public trust to ‘dispose’ of objects in a public collection.

Collector sues adviser over profits (UK)
(1 May 2014, The Art Newspaper)
Collector Eskandar Maleki is suing his former art advisor Amir Shariat for taking undisclosed commissions for the sale and purchase of art. Maleki is countersuing for defamation.

$15 million statue lying in US warehouse
(29 April 2014, The Times of India)
A statue suspected of being stolen from the village of Madhya Pradesh, India, and trafficked by Subhash Kapoor is in a US customs warehouse. It is valued at $15 million USD.

US bill would allow museums to knowingly exhibit stolen art
(2 May 2014, The Conversation)
Another piece by Tess Davis in which she discusses the Foreign Cultural Exchange Jurisdictional Immunity Clarification Act which would allow American cultural institutions to block legal claims to artwork on loan from abroad.

Italy Returns over 4,000 Archaeological Artifacts to Ecuador
(27 April 2014, Hispanically Speaking News)
A surprising 4858 Ecuadorian antiquities (I presume they were small pieces like loom weights etc) were returned by Italy. They had been discovered in three cases in Genoa it seems.

Ai Weiwei’s zodiac sculptures head to Mexico
(1 May 2014, The Art Newspaper)
This article draws a parallel between the zodiac sculptures, which are based on looted antiquities, and Mexico’s history of looting and repatriation requests. It is interesting that the Ai Weiwei exhibition will be in the Museuo Nacional de Antropología, not in a modern art museum. The author of this piece has first-hand reporting experience with major looting cases in Central America.

Riopelle art theft ‘a complete con job,’ dealer says (Canada)
(2 May 2014, The Globe and Mail)
Painting by Jean-Paul Riopelle owned by a Winnipeg dealer was stolen from a Toronto Gallery. Painting was then seized in Montreal.

Police discover more items in stolen brains investigation
(29 April 2014, RTV6)
Daniel Swallers, who is accused of stealing brains and other samples from medical museums in the US to sell on eBay, also appears to have stolen surgical equipment from a hospital and skeletons, an operating table, and a casket.

Man pleads not guilty to stealing dinosaur print
(30 April 2014, Idaho Statesman)
Utah man accused of stealing a dino print and then tossing it off a bridge into the Colorado River says he is not guilty. No motive has been described in this case yet but I can only assume it was sale.