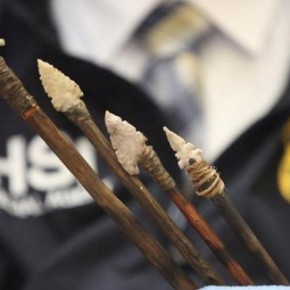 Hot this week: The Santa Maria: Lost and found…by a looter?

Britain to Return 2 Stolen Benin Artefacts (Nigeria)
(15 May 2014, Leadership)
British man, great grandson of one of the British soldiers who fought in Benin in 1897, to return two looted items to the Oba of Benin, His Majesty Omo N’Oba.

How we traced stolen Benin artefacts to Britain — Prince Akenzua (Nigeria)
(18 May 2014, Nigeria News)
Interview with the Prince about their efforts to track stolen antiquities and have them returned to Nigeria.

Antiquities theft foiled in Giza (Egypt)
(13 May 2014, Ahram Online)Two holes filled with antiquities that had been stashed by thieves were discovered by police. Middle Kingdom items.

Egypt fights looters stealing its antiquities with spacecraft and statecraft
(17 May 2014, The Washington Post)
A rather standard article. Light overview of some folks involved with anti-looting in Egypt. Nothing new.

Nazi-stolen art in Rijksmuseum, Palace Het Loo: report (Netherlands)
(14 May 2014, NL Times)
Allegations that 15 pieces of porcelain in these dutch museums were taken from the Gutmann family.

The man with a head for antiquated art (UK)
(14 May 2014, The Times)
Profile of collector Baron Lorne Thyssen-Bornemisza de Kászon who has opened another antiquities gallery in Mayfair, London.

Mystery surrounds gargoyle discovery: do you recognise these ugly mugs? (UK)
(14 May 2014, Evening News 24)
Two gargoyles recovered by Norfolk police came from somewhere (a church? a mausoleum?) but where?

Painting by Russian artist Sergei Chepik worth £25,000 stolen from office in Vauxhal
(14 May 2014, London Evening Standard)
Taken from a business in Westminster Business Square, Durham Street while the office was unstaffed.

Tate makes Rothko-defacing ink disappear (UK)
(15 May 2014)
How the museum was able to remove the writing of an art vandal.

Painting stolen 20 years ago is returned (Ireland)
(14 May 2014, Irish Examiner)
The Omnibus by Honore Daumier returned to Hugh Lane Gallery in Dublin after being found by police, probably during a wider investigation into something else. It was stolen in 1992.

Suspected mastermind of Riviera art theft says FBI framed him (France)
(13 May 2014, RFI)After 5 men broke into the Jules Cheret museum in Nice in 2007, a sting operation involving Bob Wittman (ex FBI) led to their arrest and sentencing in 2011. Convicted thief says undercover FBI sorts pushed him to rob the place. Probably not worth much.

Inside the Deathbed Deal With Cornelius Gurlitt to Return Art Looted by Nazis (Germany)
(14 May 2014, Wall Street Journal)
Said to have two desires on his deathbed “to burnish his family name by giving the trove to a museum and to send it out of Germany.”

Ancient sarcophagus seized in northern Turkey
(16 May 2014, Hurriyet Daily News)
Found by looters in Corum’s Sungurlu district in 2012, the sarcophagus was damaged by looters trying to enter it. Another tumulus was illegally excavated this March.

Nine ancient Korean seals returned from U.S. to go on display
(12 May 2014, Yonghap)
Illegally taken during the Korean war and returned last week.

The Cleveland Museum of Art says it has proof that its Hanuman sculpture was not looted from Prasat Chen in Cambodia
(13 May 2014, Cleveland.com)
A museum representative sent to the Cambodian site has ruled it out as the statue’s source because a resin facsimile of the base of the statue doesn’t match two known sets of statue feet. But museum says that this doesn’t mean it wasn’t illegally looted elsewhere.

Possible wreckage of Columbus’s Santa Maria looted, explorer says (Haiti)
(15 May 2014, Fox News)
Barry Clifford says the wreck has been looted and needs immediate preservation, but is he, himself, a looter? No looting info offered in the piece.

Discovery of Columbus’ Santa Maria: What Happens Next?
(16 May 2014, Love Archaeology)
What happens when commercial salvagers find a shipwreck and what SHOULD happen.

Seven Year Investigation Results in Return of Bank Fraud-Related Masterpiece to Brazil
(9 May 2014, ICE)
Painting by Serge Poliakoff was repatriated to Brazil from the US after it was found to have been smuggled. Discovered as a result of civil actions against an imprisoned Brazilian banker.

People of the Dirt, Part Two: The Obsessive and Destructive Artifact Thieves (USA)
(12 May 2014, Indian Country Today)
An interesting piece on the looting of Native American sites and some of the motivation behind collecting those items.

When auction house looks to Tlingit art, the sacred goes on sale (USA)
(16 May 2014, Juneau Empire)
Native Alaskan objects are popular at auction, and Native Alaskan tribes are active in trying to get auctions stopped and sacred pieces returned.

Shiva thefts put National Gallery of Australia under pressure
(13 May 2014, The Australian)
“It’s time to revisit the issues around provenance” says the president of Museums Australia.

Making good on scandal of Shiva
(17 May 2014, The Australian)
Paywalled. More on the National Gallery of Australia’s issues with stolen Indian idols.

Thieves steal more than $100,000 worth of historic treasures from Daylesford church (Australia)
(15 May 2014, The Age)
Items taken include 17th century mirror and timber screen and a gem encrusted cross. About 30 items taken.

Rare flower stolen from Milton Keynes wood (UK)
(11 May 2014, Milton Keynes Citizen)
Rare orchid theft is something that we should be talking more about. I admit it is a bit of a side obsession of mine.

It’s Time to Crack Down on Fossil Trade (Australia)
(13 May 2014, The Conversation)
Stop stealing stegosaurus!

Ancient Brymbo Forest fossils ruined in arson attack (UK)
(14 May 2014, BBC News)
Fossil samples stored in derelict steelworks site were destroyed after the metal containers they were in were set alight. Were being collected for a heritage and visitor centre.

Dead Sea Scrolls-case convictions mostly upheld by appeals court (USA)
(13 May 2014, Capital New York)
Criminal impersonation charges and forgery charges upheld against man who impersonated academics in order to discredit their work on the Dead Sea Scrolls. Was cleared of other charges including aggravated harassment and unauthorized use of a computer.