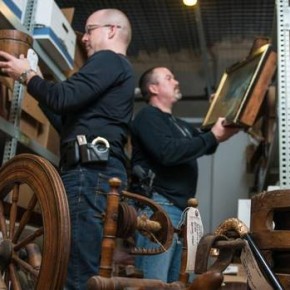 Serendipity aids Egypt in struggle to recover stolen heritage
(23 April 2014, Reuters)
Chalks all of the recent cases of scholars finding illicit Egyptian antiquities on the market to luck and chance. Not quite true, but not quite false either. Uses the interesting term ‘antiquities laundering’.

Crimea’s looted treasure on the political agenda
(24 April 2014, The Art Newspaper)
Looting of Crimean sites by so-called ‘black archaeologists’…usually metal detectorists operating against the law. This is certainly worth a read. Will annexation by Russia lead to better Crimean site protection? Probably not.

Market News: Missing Old Masters back on sale (Netherlands)
(22 April 2014, The Telegraph)
Seven paintings were stolen from the Robert Noortman gallery in Maastricht in 1987, insurance was paid out on them, then they were recovered. They are now for sale in order to recover the insurance pay-out. Word on the street is that an informant was hired to destroy the paintings in an insurance scam but that he only destroyed one.

Paris museum holds on to stolen statues
(21 April 2014, The Art Newspaper)
The Musée Guimet is negotiating with the Nepalese government over two stelae that have been off display for more than a decade. Nepal states that the objects in question are a 12th-century stone statue of Lord Vishnu, reportedly stolen late 1970s, and a 13th-century statue of Shiva-Uma, that was looted in 1984.

Man charged with thefts from Harlow Museum and Stansted castle
(21 April 2014, Harlow Star)
Items stolen were reproduction weapons and armour. Stansted-Mountfitchit castle is an actual ancient site that is privately owned and covered in rather horrible fantasy constructions and wax models getting tortured. You can buy a tshirt there that says ‘The animals ate my lunch at Mountfitchit castle’ which makes the whole deal worth it.

UK cracks down on auction rings
(24 April 2014, The Art Newspaper)
New UK law is aimed at preventing auction houses from from manipulating the market by keeping auction prices artificially high or low. Written contracts must be exposed.

Italy: The next multibillion-dollar art market?
(22 April 2014, CNBC)
A mostly absurd article about some folks trying to change Italy’s ‘national treasure’ law so that art can be exported from the country. Sure.

Stolen Painting of Jesus Found on eBay
(21 April 2014, Live Science)
The 18th Century painting was stolen from Saint Martin Roman Catholic Church in Siciny, Poland, sometime between 1988 and 1996. It was being sold out of Brooklyn with a ‘buy it now’ price of $22,000.

Remaining Tlingit Items at Yale Cause Uproar
(26 April 2014, Indian Country Today)
An update on what is going down with the Tlingit pieces in the Yale collection that made the news last week. The issue was that a student was calling for repatriation, not any Native American or First Nations group, but now: “the Central Council Tlingit Haida Indian Tribes of Alaska has applied for a grant to bring a group of elders here so they can look at the entire collection”.

Is This Rothko Real? (USA)
(24 April 2014, Wall Street Journal)
Yet another interesting and twisted tale from inside the murky world of art authentication and possible forgeries. Does a photograph of a disputed painting *IN* the artist’s archives prove it the painting isn’t a fake?

History buff finds Saskatchewan pilot’s stolen Second World War helmet
(25 April 2014, The Canadian Press)
A WWII collector buys a helmet on eBay, researches the name on the inside, finds the helmet was stolen, offers to return it, vet lets him keep it as part of an educational display. EBay is a nasty place.

Police working with thief to recover thousands of stolen artifacts (Canada)
(24 April 2014, The Globe and Mail)
An article on the absolutely brazen art and artefact thefts of John Mark Tillmann in Canada.

To Smuggle Antiquities Out of China, Traders Make Them Look Cheap
(22 April 2014, Bloomberg)
Vernon Silver provides a brief overview of a masters dissertation concerning Chinese artefacts being declared as other things during import. Not a new idea, this is done in all contexts, but it seems like the student has numbers. I haven’t heard of the student or seen their dissertation but would like to.

Return to sender: Not easy at all (Cambodia)
(24 April 2014, Gulf Times)
While Cambodia has had some successes with the return of looted cultural property, other South Asian countries have not fared so very well.

Qatar- CID Seizes Two Persons Tried to Sell Ancient Coins
(20 April 2014, MenaFn)
Two men, one Arab and one European, were caught with gold ancient coins brought in from abroad. They admitted that they had a deal to sell them in Qatar.

When A Priceless Greek Statue Lands On A Gaza Beach
(21 April 2014, World Crunch)
Nothing particularly new about the so-called ‘Apollo of Gaza’.

‘Missing Ottoman globe’ not original: Experts (Turkey)
(24 April 2014, Hurriyet Daily News)
First it is reported that this historic globe sculpture was stolen. Then it was reported that the sculpture was actually just broken and was being conserved…but the broken piece being conserves was a ‘quasi-replica’ which wasn’t original anyway. No one knows when the real 19th century globe was stolen then replaced.

30,000 students to raise awareness on archaeological sites (Jordan)
(22 April 2014, The Jordan Times)
Among other things, the student protest is meant to raise awareness about the threat to Jordanian sites caused by looting and trafficking of antiquities.

New evidence strengthens case for return of stolen Nataraja idol (Australia)
(24 April 2014, The Hindu)
An expert assessment report includes new inscription and iconographic analysis which establishes that the Nataraja idol in the National Gallery of Australia was stolen from a temple in Sripuranthan, Tamil Nadu.