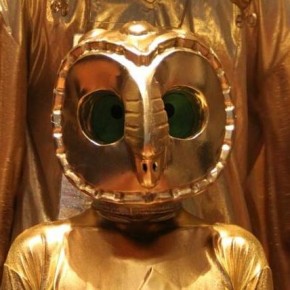 It has been a week of contrasts for the National Gallery of Australia regarding the acquisition and display of cultural objects.

On the one hand the NGA’s director Ron Radford went on the record this week to say that although the museum made some purchases from antiquities dealer Subhash Kapoor (who is on trial in India), they ‘did everything that was humanly possible’ to ensure that the idols they bought from Kapoor weren’t stolen, a statement that makes researchers like me cringe. The pieces were stolen from villages in Tamil Nadu and recently. . Correction from Vijay Kumar of Poetry in Stone, who deserves much of the credit for bringing Kapoors crimes to light and identifying stolen idols: The Tamil Nadu police put photo on their website in 2009 after the NGA purchase. That in no way means that the NGA didn’t need to look at the photos on the site. Radford said that the police ‘posted very bad photographs that didn’t look like the same [statue]’. I suppose ‘everything that was humanly possible’ doesn’t include an email or a phone call to India for better photos.

Furthermore Radford indicated that he is not convinced that the now-famous Shiva that they paid $5.1mil (thank you Michaela Boland for the correction) for is actually stolen: ‘No, I think this is by no means clear yet. There are a lot of stories floating around…’ A surprise since Kapoor’s manager, Aaron Freedman who has plead guilty to forgery of documents related to antiquities in New York, says that he personally arranged for the stolen piece to enter the USA and then move on to Australia. Pretty absurd of Radford if you ask me.

On the other hand the NGA are running Gold of the Incas: Lost Worlds of Peru and it looks spectacular: Moche pottery and Paracas textile motifs are being projected on the gallery building at night! This exhibition is the result of a partnership between Australia and Peru and it is mutually beneficial. The NGA is able to display some of the most dazzling and iconic items from the archaeology collections of Peru and Perú gets to promote tourism to wealthy Australians. Notice the Visit Peru link on the exhibition main page.

The Peruvian deal isn’t without problems. The NGA has borrowed over 200 objects from 10 Peruvian museums, but a full 80 of these pieces come from the Larco Museum, a privately owned entity that houses the very, very looted collection of Rafael Larco Herrera. I truly doubt that the looted nature of these objects are discussed or that context loss treated seriously. That said, this is an example of the Government of Peru and, by proxy, the people of Peru making decisions as to how their heritage is presented and where it ends up.

The idea of the encyclopedic museum is outdated, absurd, and limiting. International partnerships like this are ideal for a smaller, more connected world. I can fly to India and Peru relatively easily hence the tourism promotion which causes my money to flow into the developing world, and major collections of artefacts can come to me because shipping is no longer prohibitive. Even massive Olmec stone heads from Mexico have been transported abroad as part of exhibition partnerships and exchange: we can move anything.

So why are museums still collecting unprovenanced, dodgy, looted, and  stolen foreign antiquities rather than amassing contextualised collections of local culture which they exchange with international institutions in reciprocal, mutual beneficial arrangements? Because these still museums work under an antiquated model based on owning and possessing rather than sharing and compromising. They believe that this is what they are put on this earth to do.

Australians are the real winners in the Peru arrangement. Instead of their National Gallery dumping a staggering amount of taxpayer money into one (or very few) high-priced antiquities on the international market, which are nearly all certainly questionable if not outright illegal, they get 200 of the best of the best from Peru. When the Australian public is tired of Peruvian gold the artefacts will go back home and space will be made for a new international partnership and an new exhibition of the best of the best.

I am guessing the next partnership exhibition won’t be from India. That bridge is probably burned.

One final note, media outlets are publishing statements, possibly from the NGA itself, like this one:

It will no longer rely on provenance documents but requires objects to have been on public exhibition before 1970, when UNESCO ratified an international treaty about removing antiquities from their countries of origin.

I want to repeat, once again, that the 1970 date is meaningless and an object displayed in a public exhibition before 1970 is not necessarily a legal or licit one. Depending on several factors including the law of the country of origin, the statue of limitation period on reclaiming of stolen goods in the country of display as well as the specific circumstances of the case, that looted antiquity could still be stolen property and could still be seized and returned.