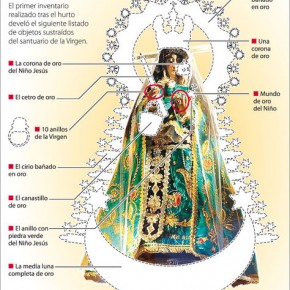 She was the replacement for the sun/earth religions offered by the Spanish who plonked her sanctuary down on an ancient holy site in the 16th century. Understandably everyone is freaking out and a lot of accusations are flying. The police have raided some premises. Some people were arrested and let go. The president accused ‘some bishops’ of being involved in the church thefts and the church has come out mad against that.

It is too soon to say much about this, but I will note that everything that was stolen was metal. As followers of this blog know I have been specifically looking into the looting and market of metal church objects from Bolivia vs. non-metal objects. These thefts happen all the time but I somehow expected that the Virgin of Copacabana would be the one icon that was well protected. I guess not.

Unless the police grab these folks quick, it is unlikely that they will get the metal objects back. I think they mostly get melted (mostly), but I can’t prove it (yet?!). Plus how do you sell the jewels of the Virgin of Copacabana?

More when I hear it.