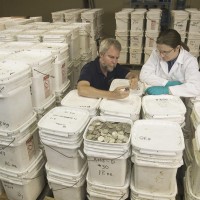 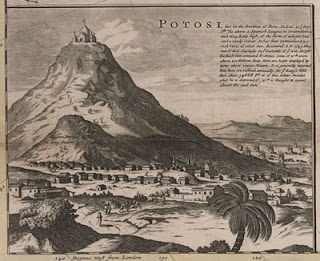 Many of you have been following the odyssey of Odyssey Marine for some time. It is high drama between a commercial salvage company and Spain that played out in US courts. Out of the controversy surrounding the wreck of the Nuestro Señora de las Mercedes (or, as it might be better known, ‘Black Swan’), Peru and Bolivia emerged as potential claimants for the contents of the wreck.Totally inadequate summary of the complex back story that I am sure that I don’t fully understand:

‘But blogger-type-person’, you might say, ‘that was a Spanish ship that went down off the coast of Portugal, what does that have to do with Peru or Bolivia…and isn’t Bolivia landlocked?’. To that, I push my glasses up my nose and say, well, in 1804 Bolivia (then called Upper Peru because Simón Bolívar was but 21 years old and was in France attending Napoleon’s coronation that year…fun fact!) was part of the Spanish Viceroyalty of La Plata, and it had not yet lost its coast to Chile. But that is beside the point. Bolivia is involved because, well, historic injustice.

The silver carried on Nuestro Señora de las Mercedes came from the fantastic silver lode of Potosí. It was mined by countless anonymous Indigenous people who were more or less forced into a system of corvee labour that was the result of a unique and complicated series of agreements that allowed for Indigenous social structures to stay partially in place in return for an annual supply of mine workers. Not all the miners at Potosí came as a result of the mita system, but life wasn’t great for anyone digging the mountain. It still isn’t. There are a lot of estimates for how many people died in the mines, but, taking into account things like silicosis and mercury poisoning let us just say the number is vast. At some point several tens of thousands of black slaves were brought in. The idea of Potosí is complicated and painful. The area is now a UNESCO World Heritage Site.

The silver on the ship, as I said, was undoubtedly mined by people Indigenous to the land that is now Bolivia. It was very likely minted in Bolivia, with Indigenous Bolivians (and black slaves at some point, who apparently were strapped to the mint mills in place of mules who tended to die from the exertion of twisting the machine) performing most of the work. Yet this activity was done under the aegis of the Spanish crown, was overseen by Spaniards, and the minted coins were property of Spain/Spanish people. Indeed the coins only exist for the expressed cultural purpose of being sent to Spain, that was their reason for being. There was nothing illegal about their movement until, maybe of course, they were removed from the seabed by Odyssey Marine (yet to be determined according to Spain). Seems like Spain has a good case for granting ownership of the coins to itself. 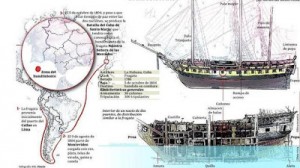 Last month Queen Sofía traveled to Bolivia to chill with President Evo Morales and take a tour of the lovely ruins of Tiwanaku (represent!) where she lit some candy on fire because that is just what is done. On 16 October, as part of that visit, Spain and Bolivia signed a Memorandum of Understanding stating that the two governments were going to work together towards the ‘reposición’ of some of the silver from the wreck. I avoided translating that word because I am not sure what English word to use in this case. Is this a ‘return’, a ‘restitution’, a ‘repatriation’? Is it, dare I say, a ‘reparation’? The objects are being cleaned and conserved and, once it is established which pieces were coined in Potosí (which, I’m going to say, is probably going to be most if not all of the silver), they are going to sort stuff out.

Morales, as expected, discussed Indigenous exploitation during his speech following the signing of the agreement. Minister of Culture Pablo Groux stated that this was a way to give Potosí ‘a little recompense’ for everything that was taken out of the mountain. Which, by the way, made up the majority of the silver in circulation in the world at the time.

Me speaking intellectually, if we are going to accept the idea of a World Heritage, the return of the silver objects to the World Heritage Site of Potosí seems like a great idea. The story of the wreck against the backdrop of the mountain and the stories of the miners is a stellar contextualised heritage experience. I’d go see that…heck I will go see that. Maybe that is what is going on here to a certain degree, but one can’t help but wonder how much this is a gesture of good will over a past injustice that the current Bolivian administration is passionate about. Spain, of course, has the sovereign right to determine the owner of the wreck’s contents by whatever rubric they think fits.

Much of Bolivia’s political rhetoric at the moment is focused on the transformational moment of the Conquest and the centuries of Indigenous hardship that followed. The idea of colonial period suffering is enshrined in the preamble of the 2009 Constitution and, historically and even currently, the struggles of the miners are the archetype of the struggles of all Indigenous people (kinda, perhaps communal land holding is more symbolic). It is pretty interesting to see this ‘reposición’ go down because it is certainly meaningful.

So yeah, this is really just your standard ‘Who owns the past’ sort of post, but it is a unique situation: Spain, as sovereign over the wreck potentially granting an insane amount of silver to Bolivia? Interesante.