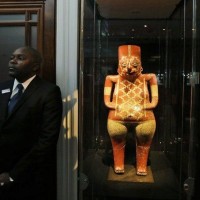 A: No one.
“Property of an Anonymous Swiss Collector” is, perhaps, the most famous auction cliché. The phrase seems harmless to the uninitiated. When it is seen in an auction catalogue, attached to an objet d’art, it conjures the images of a ruined European aristocrat selling off the family collection anonymously so as not to besmirch his name.  Like a minor subplot in a victorian novel, the auction house serves as the middle man and appearances are kept up. Yet this is all constructed around our ingrained cultural idea of who art collectors are and what auction houses do.

There is no Anonymous Swiss Collector. Historically, Switzerland has been seen as a haven for art and antiquities traffickers. A lack of specific legislation or regulation meant that once a stolen or looted object was moved into Switzerland, it could gain a sort of pseudo-legality. By saying that an object was the property of an anonymous Swiss collector (or any of the other tropes such as “from a Swiss collection”), the auction house and the seller of the object were making an important claim: that an object with a dubious past had been held in Switzerland long enough to make it “safe” to buy. “Property of an Anonymous Swiss Collector” is the equivalent of a wink and a nudge in the auction world.

To be fair, Switzerland has been getting better in the past few years. The concept of neutrality is a difficult labyrinth to think through. Doing nothing, in this case having no regulation against the movement of stolen antiquities and art into your country, clearly favors individuals who wish to commit international crimes and penalizes those who do not want to commit international crimes. Rolling with the idea that such a stance is anything but neutral, Switzerland has started to play fair over the last five or six years. They are participating with international investigations, they are helping to raid warehouses, and they are signing anti-antiquities trafficking agreements with other countries. One hopes that the Anonymous Swiss Collectors of the world (read: shady, criminal antiquities middlemen and dealers) are slowly becoming less anonymous.

Yet it is hard to step away from the image of a Swiss vault or free zone as housing vast unknown treasures. That somewhere in there is a secure room filled with everything that has clearly left Iraq since 2003, but has seemingly not hit the open market…that someone out there invested in the long term and is waiting for those illicit antiquities to be less “hot” 20 years down the line.  But then again, that image may be as fallacious as the ruined Swiss aristocrat idea. It might be leftover bias from a situation that has changed. I suppose I will just have to wait and see.