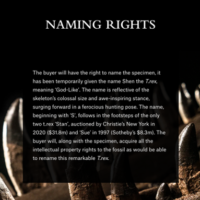 …and we predicted disruption!

In a paper that I am writing with Emily Peacock (which, I might add, needs to be submitted in a week) we wrote “While we cannot yet determine what sort of disruption Shen will cause to the humans that interact with it…” Umm now we can. Christie’s has pulled Shen. Why? IP problems.

Only a few days ago I posted about the two (now one) upcoming T. rex sales. I mentioned how we were conceiving of T. rex as disruptive objects in an affective desirescape. The T. rex form relationships with humans, those relationships seem to go off the rails, and everyone ends up in court. Looks like Shen wasted no time in causing problems. It has gone from ultra hyped dino commodity to being bundled off to temporary exhibition in an unnamed museum in a matter of days. I’m going to try to explain why as quick and painlessly as possible here, but you need to see our full paper whenever it is published.

So Shen is only around 50% of a T. rex however Shen LOOKS like a whole T. rex. This means that the rest of Shen had to be donated from somewhere: casts of another T. rex to fill in the missing bone bits. Here’s where Shen’s problems come. Pete Larson of the Black Hills Institute, who knows a thing or two about Stan and who retains Stan’s IP rights (but does NOT retain Stan) announced that it looked to him that Shen’s unauthorized bone donor was Stan. Not good.

See, this has happened before. In 2010, the BHI alleged that another T. rex, Peck’s Rex, had been completed with Stan casts, and then casts of the Stan/Peck’s Rex hybrid were being sold. They argued that Stan was, essentially, an artwork, the product of human creativity and intervention, and that they owned its IP rights. The case was settled out of court, meaning we don’t actually have clarity on if a T. rex is art or if Christie’s can sell a Stan/Shen hybrid, but the BHI maintains that they do retain Stan’s IP (and another court ruling seems to agree with that).

In other words, it is very cheeky of Christie’s to try to sell a Stan/Shen. It is even more cheeky for them to try to sell a Stan/Shen alongside the line “the buyer will, along with the specimen, acquire all the intellectual property rights to the fossil”. I guess that isn’t entirely untrue, the buyer might have gained the IP to the *fossil*, but probably not to the Stan donations. I wonder how many buyers would totally understand that…and I wonder how many buyers would consider the IP to only the Shen bits particularly valuable. You better believe I am happy I took a screen shot.

I know I shouldn’t be so surprised about this: we literally called it. We totally asked the question “which dinosaur was Shen’s donor?”, and predicted problems lay ahead. Still, this often feels like very weird work, it is nice to see that the results are, well, as real as anything else. This research is working.

I also want to point out that the lack of due diligence here on the part of Christie’s seems shocking, but we’ve seen it before in other areas. I cannot tell you why they are willing to (apparently) do little real research on such an expensive and hyped sale, but that seems to be a bit of an auction house M.O. That there was a much-reported court case a decade ago on exactly this issue, well…maybe the folks in the fossil office at Christie’s don’t have a lot of long term knowledge of this wider market. Oh gosh who knows. I don’t understand most auction house decisions, but I know that I asked “where did they get the other 50% of Shen” before this auction, so Christie’s should have as well.