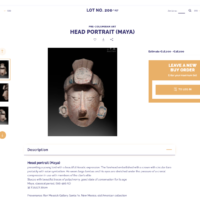 Another day, another Parisian sale of Precolumbian artefacts

In the spare time that I don’t have, I’ve been playing around with these sales, thinking about them in relation to things like…age…death…younger wives of male collectors…but I’m not quite finding the time or excuse to write that up. Part of that busy is that I am at a conference in Cairo, literally typing this while looking gazing at the pyramids and waiting for my first meeting. And really I didn’t expect to be typing this now but, of course the internet delivered this up so I feel compelled to complain.

Millon, the auction house that is no stranger to controversy related to Precolumbian antiquities (e.g. when they were openly selling a documented stela fragment from Piedras Negras. It’s been returned) is hosting its latest Precolumbian deal tomorrow. What is the sale called?

Every time I think that the antiquities market is at least halfway trying to appear not to be a sea of postcolonial racism, I see something like “Tribal Addiction”. This grab bag of world culture (ranging from the Precolumbian piece used to promote the sale to Quran tablets from Mali) is collectively dismissed as “Tribal” for a white buying audience that feels totally okay with the creation of an artificial and derogatory art category comprised exclusively of the cultural manifestations of people of colour. Then they tack “Addiction” on.

The Precolumbian lots start at lot 192, and they are the usual assortment of poorly provenanced pieces, several of which ARE NOT ANCIENT. Fakes, forgeries, replicas, whatever you want to call them, they are not what they are being sold as. As usual I am not going to tell you which ones are fakes: assume they all are and don’t buy them.

But also don’t buy them because, seriously, “Tribal Addiction”? Really? If this was, like, 1972 maybe. But now? How do they find a graphic designer who doesn’t start start getting stomach cramps when they have to put those words on a catalogue cover?

I don’t have time to go through this catalogue properly but, of course, it only takes seconds to link some of these objects to the illicit trade.

The Provenance reads “Provenance: Ron Messick Gallery, Santa Fe, New Mexico, old American collection”. That’s the Ron Messick who was facing federal prosecution in the USA for full on trafficking the obviously and recently stolen Challapampa Altarpiece from Peru before he managed to die. Someone is actually going to pay tens of thousands to buy antiquities who came through that guy? Urgh.

I’m not going to look any further at this because I have some Pyramids to gaze at, but really it’s all more of the same. I’ll work on that “dying” paper one of these days.