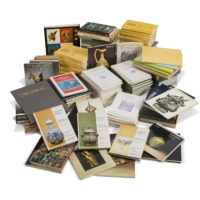 It’s time for another auction review! What is in store for us from a random slice of the history of marketing ancient things as commodities?

Unlike last time, when I strangely selected an auction that took place at the very moment of my birth pulled at random from a box, today’s catalogue was one that got misfiled somehow and was just floating around on top of the other boxes of catalogues. “Antiquities, Christies’s South Kensington, 14–15 May, 2002” selected itself.

I almost certainly wasn’t doing something as interesting as being born on the 14th and 15th of May, 2002, but what WAS I doing I wonder? This ain’t my first rodeo…blog…this ain’t my first blog, and I can my consult my ancient LiveJournal records to see what I was doing on that day. You know, I will! Let’s see what kind of embarrassing blather 19-year-old me put on the internet while these beautiful things were being commodified:

Back to it. The first thing to note is that this catalogue is big. It contains two days worth of sales stuff and it is going to take me a long time to go through it. The second thing to note is this isn’t my area of expertise. The auction houses define antiquities quite narrowly (read: racistly) and this is all Greekish-Romanish-Egyptish stuff with a smattering of items from cultures that touched those worlds. My ancient loves from the Americas are dismissed as “Primitive” or “Tribal” art, at the worst. So I’m just not going to notice key things here, but that’s cool. I’m not promising anything, I’m just inviting you for a ride.

The first swath of antiquities in there are a bunch of things from Cyprus that were being sold by Desmond Morris, the author of The Naked Ape. Well, okay. He seems to have had a real unloading here, with hundreds of Cypriot pieces going under the hammer. The Morris collection is topped up with three lots that are just signed copies of his book. Great gimmick: buy the antiquity then buy the book it is in.

Aha, here’s something to point out. This lot of 4 vessels represents a form that is totally unique (according to Christie’s): the only examples are right here in front of you. That means one of two things for us antiquities auction critics: either these are fakes, or they represent particularly negative cultural loss. If the only examples of this vessel form is here, with no context, about to disappear into the private abyss, we’ve lost that section of our human history. That bit of the past is gone. Totally unretrievable. But you can still buy the desiccated husk that is left, I suppose, if you are in to that sort of thing. A few more lots in the sale promise the same: total uniqueness.

Now around lots in the mid 100s, we are getting to the read dumb stuff. The really stupid, vague provenances, or the no provenances at all. We’re also getting to the Medici/Becchina/Symes type of stuff: Greek things from Italian tombs with no provenance. For all I know, some of these items have already been linked to those guys and I’m sure no small portion of what I am seeing passed through at least one of their hands. I just don’t have the expertise or access to link it up. It’s just a bunch of loot, though. Page after page of it.

Speaking of a bunch of loot, check out the provenance of Lot 157. Own loot from the collection of history’s most famous looter!

I’m starting to gloss over a bit. I don’t know about this stuff and it just keeps going and going. I’d wear these earrings, you know, if someone made replicas. These were ripped off a dead body and that’s just not my fashion jam:

Dumb provenance again, but here’s a legal antiquity! Whoa! Say what you will about metal detecting in the UK, on the auction catalogue face of it, it seems this ring was found, was declared properly, and the finder was eventually told they could do what they want with it. The entry hints at a back story, and if anyone knows that back story I’m all ears, but lot 335 is the first that I’ve seen so far in this catalogue that is demonstrably not looted. It’s probably going to be the only one.

At lot 372, page 156 of the behemoth catalogue, we hit the centrefold, an 18th dynasty tomb statue of a couple. The provenance is listed as only Kofler-Truniger Collection, without even bothering with a decade, let alone a year or a location. They also state with the kind of confident bravado that you only see in art marketing literature, that it dates to the reign of Tutankhamen. No, not to the reigns of Neferneferuaten, Smenkhkare, or Akhenaten, to exactly the 9 years of Tutankhamen despite the piece not having a date on it. How do they know this? Because Tut sells, folks.

Although the sculpture has no date, it bears a name. This woman is Baket-Mut, Songstress of Amun, and she (like everyone these days) is Googleable. It seems as if this piece eventually found its way to New York and to “Pace Primitive”, which is something someone actually named their gallery with a straight face, by 2006. Last the internet heard of poor Baket-Mut, she was being marketed in China by David Aaron in October 2019, though she is not up on his website now so I presume she sold to someone. Will we ever see her again?

Now on to more unprovenanced stuff. More Apulian stuff that feels like Medici/Becchina/Symes, oh! And an Anonymous Swiss Collector for good measure:

You know, however much this auction promoted the whole Naked Ape author thing, a large number of these lots are being sold as “Property from an Asian Collection” with the same stupid provenance of “Acquired during the late 1960s to early 1970s.”

Someone is offloaded a lot of unprovenanced material and the catalogue isn’t sharing who that person is. Each one of them has a little star by their lot number because the buyer gets to pay less VAT on these ones, thus they are noticeable. It’s almost the bulk of the sale, and it’s right when Medici and that lot were in hot legal waters. Where did this stuff come from and if there really was an Asian Collector, who did they buy it from? Why do they get to dump this stuff without any scrutiny?

Uggh, here’s a baby coffin for you to buy. Someone chucked a child’s dead body out of this thing so that it could be commodified. This is weird, right? It’s from that anonymous Asian collector too.

So what’s going on here? The tomb that this ushabti comes from was excavated by Sir Flinders Petrie…but why is this piece on the market then. Did he find a previously-looted tomb, or is this somehow post-Petrie excavation sale? Googling the name Hor-Udja, we get more story from Manchester: Petrie found 399 ushabtis in the tomb. Birmingham gives us even more discovery detail: in true Petrie style, we find out the tomb was flooded and fella swam in an dislodged the ushabtis with his feet with mummy bits floating all around. This piece goes into some really super interesting analysis of the ushabtis from this tomb that is, for a large part, only possible because they were excavated by an archaeologist, albeit an early one.

What still isn’t said is how we moved from excavation to Christie’s, but that isn’t a totally uncommon pathway for Petrie items, but this piece has history and contributes to history because it wasn’t looted. The rest of the stuff in this catalogue…just a bunch of loot.

Zsuzsanna Vegh at Edinburgh is doing interesting work on the ushabti market: hers is research to watch.

So what did we learn from this auction: