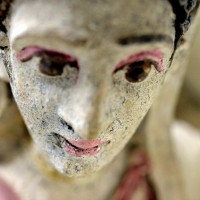 Hot this week: Attractive Etruscan Symes loot sees the light of day after years in Switzerland.

The Carabinieri Command for the Protection of Cultural Property by Laurie Rush and Luisa Benedettini Millington
(7 February 2016)
All about the world’s most stylish art cops: who the Carabinieri are, what they do, and how they do it.

New degree programme: MSc Collecting & Provenance in an International Context
(5 February 2016; Anonymous Swiss Collector)
A provenance research masters programme which I am teaching on. I do the crime bits. Now University of Glasgow master’s students have the option studying antiquities trafficking and art crime while getting an arts degree (as opposed to the criminology one).

Interview with Ronald S. Lauder: ‘Good faith alone doesn’t make pictures clean’
(3 February 2016; World Jewish Congress)
I think this is something that should be asserted much more often.

Angola: Sindika Dokolo Foundation to Recover Two More Angolan Culture Artefacts (Angola)
(5 February 2016; All Africa)
This comes on the heels of a return of three other stolen artefacts to Angola via Dokolo.

German teen faces life ban from Egypt after scaling Khufu pyramid (Egypt)
(3 February 2016; Ahram Online)
If he had been caught he could have been punished with up to three years in prison.

Three Arrested for ‘Selling Pieces’ of the Giza Pyramids for $32 (Egypt)
(6 February 2016; Egyptian Streets)
There were already reports of this happening but an undercover reporter got video.

Para el padre Joaquín, el robo de la corona de la Virgen es “un mensaje” (For Father Joaquín, the theft of the crown of the Virgin is “a message”; Argentina)
(2 February 2016; El Liberal)
The crown was stolen from the Church of Our Lady of Carmen of Campo Gallo

Vancouver artist a repeat victim of thieves targeting his paintings and art supplies (Canada)
(6 February 2016; The Province)
Theft from actual artist. Art stolen before it was even made.

Rescatan Zonas Arqueológicas (Rescuing archaeological sites; Mexico)
(4 February 2016; AM)
A warning that archaeological objects that are found must be given to the authorities.

Museum of Art opts for student security guards, not Plexiglas (USA)
(31 January 2016; The Universe)
The balance between security and experience: employing students as museum guards?

Oregon Militia Standoff Spotlights Federal-Tribal Quandary over Artifacts (USA)
(3 February 2016; The American Prospect)
The Paiute demand that authorities investigate whether the militia damaged any protected artefacts during their standoff.

Renowned Worcester builder’s ‘beehive’ mausoleum targeted at Hope Cemetery (USA)
(4 February 2016; Telegram)
This is a larger grave robbing case but one of the robbed graves was a historic mausoleum.

Antoine Blanchard Painting Recovered 48 Years After Multimillion Theft (USA)
(5 February 2016; ArtNet News)
One of 3000 (!) paintings stolen in an inside job from a New York gallery.

Former Capitol cop accused of stealing state painting (USA)
(6 February 2016; Journal Sentinel)
The painting was taken from the governor’s mansion storage and ended up in the hands of a Connecticut art dealer.

California A-G looks to reverse ruling over Nazi-stolen artwork (USA, Spain)
(6 February 2016; I24 News)
A US judge ruled that under Spanish law the Pissarro belonged to a museum in Madrid; the AG has requested a reverse of that ruling.

The Bouvier Affair: How an art-world insider made a fortune by being discreet (USA)
(8 February 2016; The New Yorker)
The must read long read on the Yves Bouvier case.

Art Dealer Eric Spoutz Charged With Selling Dozens of Fakes of American Masters (USA)
(3 February 2016; NBC News)
The Michigan art dealer Eric Ian Spoutz (who has a number of aliases) may have sold to a number of galleries and museums

Art Historian Jack Flam Bristles on the Stand at Knoedler Fraud Trial (USA)
(3 February 2016; ArtNet News)
Speculating from the outside, but getting hostile with art historians on the stand probably won’t sit well with anyone.

Knoedler asked forensic conservator to revise ‘negative’ report (USA)
(5 February 2016; The Art Newspaper)
Power to the conservator who refused to change their analysis.

Why It’s So Hard to Spot a Fake Rothko, Even for His Son (USA)
(5 February 2016; The Daily Beast)
The Knoedler case is pretty much why the younger Rothko doesn’t get involved in authentication.

Temporary Agreement Reached in Custody Battle Over Picasso Bust (USA, UAE)
(1 February 2016; The New York Times)
The piece will go to the Gagosian until the conflict is adjudicated.

Billionaire Leon Black Revealed as Mystery Buyer for Contested Picasso Bust (USA, UAE)
(4 February 2016; ArtNet News)
Nothing sheds like on the usually-anonymous world of art dealings quite like a lawsuit.

Se roban a ‘La Conchita’ de Tonanitla (‘La Conchita’ of Tonanitla stolen; Mexico)
(3 February 2016; El Universal)
The thieves came in through a window, took the Virgin who dates to the 1920s, and left through the door.

Fuerzan dos iglesias de Bande pero no se llevan ningún botín (Doors forced on two Bande churches but nothing was taken; Spain)
(4 February 2016; La Region)
It is unclear why the doors of these ancient churches were broken in to.

Hundreds of looted antiquities including mosaics from Pompeii and ancient sarcophagi are uncovered in Switzerland (Switzerland, Italy, UK)
(1 February 2016; The Daily Mail)
A good selection of photos of the seized Symes stuff.

Mates have Banksy art stolen and flat trashed by Airbnb guests who left condoms and laughing gas (UK)
(3 February 2016; Metro)
When you let a stranger stay in your home. Hopefully it was insured.

‘Short-sighted’ council ‘lost opportunity to put Northampton on the map’ by selling Sekhemka (UK)
(3 February 2016; Northants Herald & Post)
Instead of attempting to showcase their unique artefact, they sold it.

Heidelberg police appeal to find owners of stolen painting of toddler (Australia)
(1 February 2016; Heidelberg Leader)
Is this your painting? It was recovered from a stolen car.

Aratoi museum and local iwi buy back ancient Maori cloak after century in US (New Zealand)
(2 February 2016; Stuff.co.nz)
An acceptable resolution to this strange case.

Ornaments taken away from Gulvady temple (India)
(3 February 2016; The Hindu)
Among the items taken from the sanctum sanctorum of the Sri Durgaparmeshwara Temple at Sowkur in Gulvady village were a silver mask and two silver umbrellas.

Antique dealer Kapoor produced in Kumbakonam court (India)
(5 February 2016; Business Standard)
It was decided that Kapoor can attend parts of his trial via video conference

Youth found dead near temple, idols stolen (India)
(5 February 2016; The Siasat Daily)
The murdered young man, it is assumed, was a witness to the theft.

House panel looking into museum artefacts after 400 ancient coins replaced with fakes (Jordan)
(3 February 2016; The Jordan Times)
A shocking number of fakes uncovered in the Citadel Museum in Amman.

One museum’s tribute to the murdered Syrian archaeologist, Khaled al-Asaad (Syria, USA)
(4 February 2016; Apollo)
The Museum of Fine Arts has put up a memorial to him.

Picasso painting seized in Turkey dismissed as fake (Turkey)
(2 February 2016; Hurriyet Daily News)
I am constantly amazed at Turkish police’s inability to confirm anything art related before they announce it.

Saving Yemen’s heritage, ‘heart and soul of classical Islamic tradition’ (Yemen)
(5 February 2016; Al Jazeera)
The effort to digitise the approximately 50,000 at risk of being destroyed in the current bombing of Yemen.

Karnak Amun-Re statue not recently restored as claimed (Egypt)
(6 February 2016; Ahram Online)
The ministry of culture says the terrible restoration job, the butt of online jokes, has been there for 50 years.

Iran’s Eight-Million-Year-Old Fossils Unveiled after Returning Home from US (Iran)
(6 February 2016; Tasnim News Agency)
The fossils were out of Iran during the Revolution and are just now being sent back

Woman sues AP for taking and selling stock photo of her wearing a headscarf (USA)
(25 January 2016; The Washington Post)
Can a photographer take a photo of a stranger and then sell it to news outlets? Does the stranger have any rights?