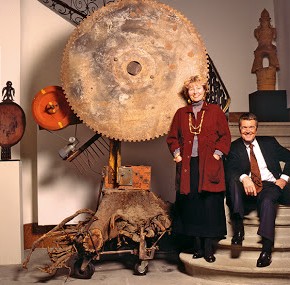 In this post I want to talk a little bit about the (very) little that I know about the Barbier-Mueller collection. As you can imagine, this mostly concerns shady dealings with particular objects, none of which are in the 22/23 March Sotheby’s Paris sale, none of which will probably ‘surface’ anytime soon. Indeed, my most favorite looted antiquity may (or may not!) be in the Barbier-Mueller collection: the Rio Azul mask.

So who is behind the Barbier-Mueller collection?

Why are they selling this stuff?

What is being sold?

The portion of the Barbier-Mueller collection being sold at Sotheby’s is pretty much your standard hodge-podge of “Precolumbian” things from up and down the Americas. Indeed, contents of the sale catalogue is not unlike the catalogues produced for several decades of Sotheby’s New York’s biannual Precolombian sale. Plenty of these items came through those sales. At least one (lot 13) came from my pet ‘favorite’ dealer at the moment, the late Everett Rassiga.
Everything is pretty standard marketable stuff: the popular things people buy for whatever reason. To go a step further, a lot of the items are exactly the sorts that have been (controversially) called fakes by Karen O. Bruhns and Nancy L. Kelker in Faking Ancient Mesoamerica and in Faking the Ancient Andes. I can certainly see how many of these things are just too perfect, too appealing, too modern, and totally unknown in the actual archaeological record. Take that with a grain of salt, but don’t just accept these things are all ‘real’.

How is the provenance?

This section is partially in response to criticism over Peru’s action to recover the Peruvian items in the auction. Reporting on the issue makes it seem that the collection is all pre-1920s and that Peru is acting anyway. Other commentators have stated that this is evidence “that museums and others were snookered into accepting a 1970 date for acquisitions of artifacts”, stating that such a claim is unreasonable.
I don’t want to go into the 1970-or-not debate, but I think it is worth having a look at the provenance of these objects before we start saying such things. Why? As I said, Sotheby’s REALLY wants you to think that all of this stuff appeared in Switzerland magically in the 1920s. That simply isn’t reality.
Like a madwoman, I have gone through the whole catalogue and recorded the listed ‘surface date’ of each of the items for sale. I am being very liberal and trusting the listed date-of-purchase from other galleries/dealers (usually I only trust publications and exhibitions because, well, people lie). The only thing I won’t accept is a date with no name (no Anonymous Swiss Collectors)… those I kick up to the next date (there aren’t many of these). Remember the house and the owners are motivated to push the provenance date as far back as they possibly can so we have every reason to believe that the dates listed are the earliest records for these objects.
Here is what we have in this sale: 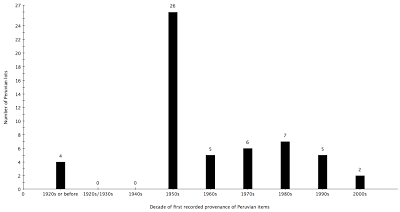 What does this mean for Peru’s case?

Almost nothing. Although 1970 is bandied about, complained about, and called upon, and dismissed, the Government of Peru did not give up legal ownership of archaeological material upon signing the UNESCO convention. Peru is asserting ownership and, thus, illegal export. Ownership. Just like a private citizen could (you know, if you could privately own such things in Peru). I understand that assertions of ownership across borders is a bit of a dog’s breakfast: it is difficult to sort out, difficult to understand, and difficult to talk about, but under Peruvian law, Peru has owned all archaeological things since 1929 (or perhaps 1822). How foreign courts interpret this based on their own law is, well, up to those foreign courts but there really is no practical reason to make the 1970 date more than it is.
And, again, the slight majority of items in this sale are post-1970 anyway so are unclean no matter how you look at it.

Now where is Guatemala in all this?

Since I know all of you have read my encyclopedia article on the Rio Azul mask it is silly for me to quote myself. I will anyway:

A TON of the items for sale at Sotheby’s are from Guatemala. Many of the ‘freshest’ artefacts, the ones with provenance dates in the 2000s, are Maya. I am not sure what kind of crossover there is with the 12 items that Guatemala unsuccessfully laid claim to a few years ago, but I would have thought they might have a go at these, especially if Peru is getting involved. Perhaps they are sitting back and letting Peru spend the money (if, indeed, any money is being spent, who knows). Let us see what happens.