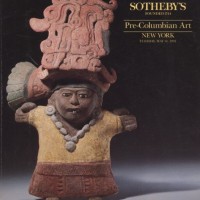 Peru is attempting to recover 67-ish archaeological objects being offered by Sotheby’s Paris’ 22/23 March sale of items from the Barbier-Mueller Collection. An interesting and quite unsurprising move.

My initial thought was that Sotheby’s wouldn’t touch the Barbier-Mueller if they didn’t think their ability to sell the stuff was clear. I don’t really know the specifics or the logistics, but I imagine that is why the sale is happening in Paris rather than in the United States. For decades and decades New York has been the venue for the house’s Pre-Columbian sales. If that isn’t where the market for this material is, it is at least where people expect to buy it. However the movement of the collection into the United States for sale might just be problematic. A quick rundown of why:

Basically, the moment Sotheby’s takes any of this stuff across a border, things could go off the rails, and if they tried to bring it into the US for a sale, the US would be obliged to halt the shipment at customs and investigate Peru’s claim of ownership because you can’t just take Peruvian antiquities into the US anymore. Or at least you aren’t supposed to be able to. Best leave it in Paris and let whoever buys this stuff deal with the trouble.

Of course none of that could be a factor. Who knows.

Moving back to what this post was supposed to be about. The Wall Street Journal article quotes someone at the Peruvian Ministry of Culture as saying: “It is possible to deduce that their exportation must have been clandestine, given that from April 2, 1822 Peruvian regulations prohibit the removing of archaeological goods without government authorization.” They could have quoted me as saying “you have got to be kidding.”

“San Martín proclaimed Peruvian independence after reaching Lima the following year [meaning 1821]. Royalist strongholds remained throughout the country and in Upper Peru, so it was not until four years later that the Spanish Monarchy was definitively defeated at the Battle of Ayacucho by troops under the command of Antonio José de Sucre [meaning December 1824]. Upper Peru was once again separated from Peru in 1825 by an Upper Peruvian constituent congress, despite opposition to the plan by Bolívar [Sorry Simón, no unified South America AND they named the resulting country after YOU!].”

I am not a lawyer. That should be obvious to everyone, especially lawyers. However, I do spend an unhealthy amount of my waking hours[1] thinking about South American law in historical and social context. Not really if the law is/can be applied (working on that), but rather why it says what it says when it says it. I think about the Revolution quite a lot and, honestly, I really have trouble believing anything much came out of Peru (or “Peru”) in 1822. If it did, it would have been some fuzzy declaration of state sovereignty over land and water. Super broad. Pretty much translatable as “Look, we are a country now, this is us”. At least that is what I thought. I admit that Peru is not my forte. I set about finding out.

Now tell me, readers, do you think anyone in the Peru of 1822 was claiming archaeological objects for the Peruvian people?

This is from a blog post by Fabricio Alfredo Valencia Gibaja so, let us assume it is believable:

“Supreme Decree No. 89 of 2 April 1822. Signed by Torre Tagle by order of Bernardo de Monteagudo. This law is the first time we find legal precedent for the protection of cultural heritage in Republican Peru; it expressly established that the monuments that remain of ancient Peru are the property of the Nation, that they can circulate freely within the country, saying that the government has the right to prohibit their exportation. The extraction of mineral stones, ancient works of pottery, textiles, and other objects that are found within the huacas [archaeological sites] is absolutely prohibited. The Government is able to grant licenses for projects of public interest and to sanction the violation of this provision with the loss of ‘especie’ and a fine of 1000 pesos. It also charges customs officials with ensuring compliance with the previously mentioned requirements.”[2]

Wow, okay…if it says that, that is a bit of a surprise. I really want to see this law now. From that little summary I honestly can’t tell if baby-Peru fully claimed archaeological OBJECTS as property of the nation. Monuments, yes. Extraction, no. But do they say “we, Peru, own this stuff”? Because, you know, I am not quite sure they did. Why you ask? Well that ‘effin mess that was Peru v. Johnson.

To quote me quoting other people: “Their case hinged on the country of Peru proving that Johnson’s collection was composed of stolen property. This claim was based on Peruvian Law No. 6634 of June 13, 1929 and Peruvian Law No. 24047 of 5 January 1985, which identify the Peruvian State as the rightful owner of undocumented Peruvian antiquities (Kobrinski 2011).” Thus in one of the most well-known (and totally frustrating) Peru repatriation cases to hit US courts, this 1822 Supreme Decree was not even a factor in the whole thing being a total wash…

I guess I wonder where Peru is going with citing the 1822 law if, in the past, international courts have not seen that as proof of an ownership claim. Maybe the personified Ministry of Culture was just saying stuff that sounds good. Maybe it is because some (but certainly not all or even most: some of this crap is from the 2000s!) of the Barbier-Mueller stuff may have a pre-1929 provenance?

[1] And sleeping hours. A few days ago I dreamed that I was looking up at a massive grey/white skyscraper from its base. I knew, just knew that the skyscraper was “the law of Uruguay”. The skyscraper was all Uruguayan law. Then I woke up.