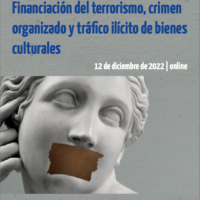 On 12 December I delivered a brief talk for a training event co-hosted by the EU AML/CFT Global Facility and EL PAcCTO. The workshop was called Financiación del terrorismo, crimen organizado y tráfico ilícito de bienes culturales (Financing of terrorism, organized crime and illicit trafficking of cultural property) and I presented in the session Financiación del terrorismo y mercado de bienes culturales alongside Dr. Marta Suárez-Mansilla and Dr Ana Vico Belmonte. I was very happy to be grouped with both Dr Suárez-Mansilla and Dr Vico: both do excellent research and both feel the way I do about how the linkages between the art market, financial crime, and the idea of terrorism financing should be approached and understood. Saying, more or less, “I don’t think this event is focused on the right topic” is a lot easier when other experts are saying it as well.

We were only given 8 minutes each to speak: fine for me since I was speaking at 4am in New Zealand. Because of the extreme time and time limit, I prepared my remarks in advance. I usually don’t have notes like this but since I do, I will share them here.

If you are going to cite these remarks, please cite it along the lines of:

I am honoured to follow Marta and Ana: I always agree with them. They have discussed the market in cultural goods and the insertion of those goods in to the market, I will focus briefly on the source of these antiquities in relation to terrorist financing: the early stages.

The interplay between terrorism financing and cultural goods trafficking is subtle and complicated. What we do know is that the large price tags and profits reported in the media are incorrect and do not relate to evidence or research: no research ever conducted supports them.

However, there is a physical element to this crime: we know when it occurs. We can see large numbers of holes in the ground which destroy important archaeological and heritage sites. Yet the large number of holes do not equate to profitable finds of cultural goods (just destroyed heritage sites). There could be nothing in each of those holes. Or low value items. To put it in perspective, I’ve found a small gold artefact only once in my archaeological career: it was in Bolivia…and that was the only gold piece anyone found at all that year on a project at a major heritage site. What I am saying is that holes in the ground do not necessarily mean that terrorist groups have produced large financial profits from cultural goods, at least not directly. As Marta noted, the great profits are at the market insertion end of the trafficking chain where we don’t see much possibility for terrorism groups to participate directly. They profit in other ways, but I will get to that in a moment.

Even in areas experiencing significant instability due to the presence of terrorist groups: looting and trafficking of cultural groups is usually not directly undertaken by those specific groups. Looting cultural sites is physically difficult work which requires a lot of human commitment. Trafficking cultural goods and placing them into transnational illicit market streams requires specialization and expertise. It’s not a criminal activity that can be entered in to casually, and in most cases, it isn’t a criminal activity that is worth a terrorist group’s time and effort. The financial returns are just not there.

In the case of ISIS (which really should not be our only focus, I think we must talk more broadly), we saw some past, brief, taxation of the process of cultural goods looting in ISIS controlled areas. They issued permits to loot. We also have indications that some antiquities sales locally were used to generate some hard currency: immediate transactions to produce physical dollars etc. Pre-existing cultural goods trafficking networks with transnational connections likely made it known that they would pay (likely low) amounts of cash for certain cultural goods.

This likely worked best at smaller scale and with smaller objects such as coins that are launderable, have some degree of intrinsic value, and can be easily transported. They are also easier to find (e.g., with metal detectors). So not unique sculptures that would fetch multiple millions on the market (if they weren’t so obviously looted and trafficked from a war zone) but nearly anonymous gold and silver coins, which were produced in large numbers in ancient times, which could have come from any of MANY modern countries, not just say Iraq or Syria, which can be concealed quite easily for trafficking, can be melted down for raw gold or silver if no one is found to buy it as an ancient coin. They also don’t cost very much on the final market, which is a benefit not a draw back. These types of objects also fall below several transaction reporting guidelines in consumer countries.

When you look at data related to seizures of cultural goods over the past decade: it’s a LOT of coins. Mostly coins even. Also a lot of other small objects…and they are not effectively monitored.

So in a sense I have talked away from the idea of terrorism financing related to cultural goods. However, I think that too is incorrect. If we go back to ISIS, they profited CULTURALLY from the looting and trafficking of cultural goods in territory they held. Cultural destruction was used in the recruiting and other videos they produced. Cultural destruction was also used to devastate the population socially: to annihilate heritage. Harnessing the power of heritage is extremely valuable to terrorist groups, and I am sure more subtle income streams are produced from it beyond direct sales.

So I think what should be looking at this as a form of transnational organized criminal activity which can support and is supported by the social instability and physical insecurity caused by terrorist groups as well as other criminal groups. These criminal groups enter the picture when government control is weak or collapses. Terrorist groups can create the instability that allows cultural destruction to happen, even if those groups are not the ones directly engaging in the destruction.

So the Narcos were not looting archaeological sites and trafficking goods, but both the narcotic support economies they create in certain locations, and the people displacement they cause led to looting. THOSE people looted sites. It was worth their time, the small gains they could get were significant to them, and they were often in desperate situations of instability. Plus, the jungle clearing for, for example, cattle ranching which WAS an effective way to launder narcotics money resulted in the discovery of cultural goods by the poor campesinos who were clearing the land…they looted those cultural goods. So, narcotics trafficking and looting were connected, but again in a more complicated way than direct sales.

Ultimately this isn’t straightforward terrorism financing and perhaps we shouldn’t be talking about this form of crime in that way. It would be very difficult, in my opinion, to make terrorism offences “stick” in most of these cases and I think the past decade has confirmed that. However, there’s a lot of potential in exploring financial crime offences which can potentially break up the middle to market end drivers of this crime. It would also ruin any form of financial or cultural profiting by terrorist groups or, indeed, any source end criminal group. We have evidence that the process of laundering money associated with illicit cultural goods sales connects to numerous forms of transnational organised crime, but we are only just beginning to consider how to practically tackle this.

Thank you for your time and I am happy to discuss this topic further. Please do not hesitate to ask questions or contact me directly.