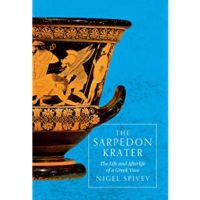 The infamous ‘hot pot’ is more than just a crime victim

The Sarpedon Krater: The Life and Afterlife of a Greek Vase
by Nigel Spivey
2018, Head of Zeus

Before I say anything else, I want to know that The Sarpedon Krater by Nigel Spivey has a built-in bookmark! A blue ribbon sewn to the top, ready to mark your page. I read this book on a long lazy Saturday spent following a toddler around from room to room, and the convenience of that book mark earns it the top paragraph spot in this review. Read this book, it has a bookmark.

Most readers of this blog are very, very, very familiar with The Sarpedon Krater (aka The Euphronios Krater, aka “The Hot Pot”). If you know about one illicit antiquity, I’d say chances are good that this is the one you know about. It has been a scandal since the 70s, and even after its return to Italy in 2006, this looted and trafficked artwork remains a textbook example; I certainly use it in my teaching. I know the krater’s crime story backwards and forwards, what more could I possibly learn from another book about it?

See, The Sarpedon Krater is not a book about crime, it is a book about an iconographic tradition; the krater as art rather than the krater as evidence of wrong-doing. The author devotes chapter 2 to the krater’s sordid recent past, and then swiftly moves on. On to multiple interesting chapters that show how this pot and the imagery on it are one stop on a journey towards an evocative and enduring visual composition.

So back to this Saturday. As my partner bimbled around the room with out toddler and as I lay on the kiddie bed, wrapped up in a dinosaur duvet reading this book, I was pleased to find myself moving away from the physical vase, and towards the Homeric tradition. While learning about the death of Sarpedon and the importance of the scene depicted on the vase for the narrative of the Iliad, I started reading out loud. My partner, who while not an ancient history person likes a bit of Homer from time to time, got sucked in to the narrative, and we ended up spending the next few hours taking turns reading the book out loud. We read through playtime, through dinner, through the toddler’s bath, and then finished it up while doing the dishes. Sad because we didn’t have any more The Sarpedon Krater to read, that evening, my partner and I both went on individual Wikipedia spirals into all articles on Greek vase painting and related iconography.

To sum it up, my family and I spent a lovely Saturday with this book. You could do the same. AND it has a bookmark.

I do want to address a few issues I am having. Two really. One is with a mild assertion made by the other and the other is the content of the book series that this volume is part of.

Much of the book is focused on the construction of the scene on the krater: the dead Sarpedon being lifted by winged Sleep and Death. The author follows this scene through the centuries up to contemporary war photography. Though this is one small point in the book, the places the invention of this composition with Euphronios, a Greek potter and pottery painter who painted the scene on the krater in question. Why? Because he cannot think of an earlier version of it. I couldn’t help but start to pick that apart. Lack of preservation doesn’t mean that earlier versions didn’t exist. How much influence would a pottery painter really have? How could a pot sold on to the private market then shut up in a tomb for thousands of years truly been the seed of this all? It is probably not the author’s intention, but this comes close to ascribing singular genius to Euphronios in a way that I don’t think is either supportable or useful…or fair to Euphronios. To discuss why the scene is spectacular and where it fits into all the art that would follow is interesting enough, you don’t have to force something like that to have a creator.

Issue two: this book is part of a series: The Landmark Library Chapters in the History of Civilization, “a record of the achievements of humankind from the late Stone Age to the present day”. “Uh-oh”, I thought when I read that, “this is likely to go wrong”. Of the 16 books listed in the series that were either published in 2018 or were awaiting publication, only one of them was on a non-European topic…and that one was on Gilgamesh and, thus, gets adopted in to European-ness. Sorry, Africa, Americas, Oceania, or Asia, no “achievements of humankind” for you. I guess it could have been worse, the copy could have said “mankind”. Reading that in the front of this book put me in a grumble mood, but I soon got over it enough to enjoy The Sarpedon Krater for its own merits.

Meanwhile I have just looked up The Landmark Library series and, apparently, the next one to come out is about the settlement of the Pacific, which was the first “achievement of humankind” that I thought was totally missing from this eurocentric series. If you think the Sarpedon Krater is good, REALLY think about people on outrigger canoes getting all the way to Easter Island. Peopling the Pacific is one of the most amazing things humans have done. Another upcoming volume is The Arab Conquests, but that’s just two, and two that aren’t out yet. Improvement though.

I don’t want either of these issues to cause you to think “ehh, maybe not” on The Sarpedon Krater. If every Saturday was like that beautiful Saturday spent reading about Greek art with my family, I’d be happy.