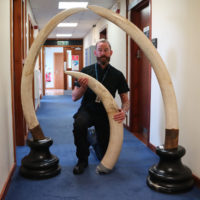 I am very happy to share that on 12 October Police Scotland launched “Operation Wingspan”, a year-long focus on wildlife crime. Wildlife crime is major concern in Scotland and this police commitment to raising awareness about it is important and very welcome.

Of particular interest to me and to readers here (I imagine) is the first phase of the operation: a 2 month campaign to raise awareness about the illegal trade in Endangered Species.

The official website of the operation can be found here: https://www.scotland.police.uk/wildlifecrime

The official poster of the operation can be found here (do share it):
http://www.anonymousswisscollector.com/wp-content/uploads/0145-15-AR-Wildlife-Crime-Poster-subtopic-CITES.pdf

Police Scotland have been kind enough to send me their partner toolkit as well and it think you readers (like me) would be interested in the stated messages and goals of this awareness raising campaign. The show how police are thinking about this issue. So taken from their info kit:

So a lot of the messaging here is that combatting wildlife crime requires partnerships between police and members of the public. That the complexity of this kind of crime requires creativity and input from various sectors. That reporting is key.

I look forward to hearing about the results of this operation and will post what I find out here. Meanwhile, here are some of the images Police Scotland has provided to go along with the awareness-raising component of the operation. Do have a look, and share this information on.