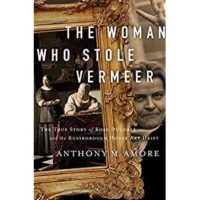 The Woman Who Stole Vermeer: The True Story of Rose Dugdale and the Russborough House Art Heist
by Anthony M. Amore
2020, Simon & Schuster

I know right? Go ahead, click over to another tab and buy the book. This review will be here when you get back.

I knew a bit about the art thefts at Russborough House in 1986, 2001, and 2002 (seriously…), but somehow the earlier one fell entirely off my radar. Before opening this book I knew nothing at all about Dugdale and, worse, I knew very little about the context in which she was operating: the fringes of the Provisional IRA in the 1970s. This book led me to a Wikipedia spiral into the depths of Irish recent history and I learned quite a lot. I could only go on that Wikipedia spiral early in the morning before getting out of bed. When the lights were on I couldn’t put The Woman Who Stole Vermeer down. The story is good. [I’m going to avoid spoilers in this review. If you want to know said story, read the book.]

I think this was a complicated book to write. Dugdale’s political beliefs, social outlook, and willingness to embrace violence as a means toward an end are difficult to approach with measured and open examination. They are, for some, easy to dismiss, but such a dismissal spoils the readers chance to understand the context and motivation of Dugdale’s crimes. One can understand without sympathising. This is where The Woman Who Stole Vermeer succeeds. Amore allows the reader to make their own decisions about politics. He focuses on Dugdale and what she believed and where those beliefs took her, while not passing personal judgment on those beliefs. It occurs to me now that, based on the book alone, I have no idea how Amore feels about Irish Republicanism, and that’s good. This book isn’t meant to evaluate Dugdale’s worldview, rather it is meant to record her almost unbelievable but true story.

Since I can’t tell you the story without ruining it for readers, I’m going to get a little academic here. There are two really fascinating aspects of the art theft(s) that this book records: features that make the theft(s) quite different from other art thefts. The first is the most curious: the art thief in question is a woman. For reasons that no one knows [1], nearly all art thieves are men… well at least nearly all the ones that get caught are men. There are very, very few exceptions, and Rose Dugdale is one of them. Why?

The second aspect that draws my attention is what motivated the theft(s). When I teach criminology master’s students, I have them think about classifying art theft into three broad categories (while warning them, of course, that categorisation is an analytical tool, not a reflection of reality):

With Dugdale, we have a solid number 3. Making an educated guess, politically-motivated art theft is probably the rarest and the weirdest of the three [2]. I mean, how about the story of the theft of Goya’s portrait of the Duke of Wellington (now a feature film starring Helen Mirren and Jim Broadbent)? Fella stole a Goya to protest TV licensing fees in the UK. Dugdale, who ALSO stole a Goya, had significantly sharper political motivations. The interplay between the symbolic power of art within our society and the use of that art for political purposes via acts of crime just sucks me in. Urgh, I want to go write some research papers on this right now. Someone hit me up with a great PhD proposal on the topic and I will supervise the heck out of it [3].

Amore is well placed to write a book involving Vermeer theft. Although he doesn’t mention it in the book, and I imagine he is tired of having to talk about it, Amore, besides being a true art crime author, is the head of security at the Isabella Stewart Gardner Museum, the museum that, itself, lost Vermeer’s Het concert [4] to a theft in 1990…before Amore worked there of course. I wonder if that is what initially brought the author to Dugdale as a subject of research: a professional interest in Vermeer loss turned personal by the intrigue of Dugdale’s story. Amore’s deep interest in this case is evident in the amount of research he clearly put in to this book.

I’ll be recommending this book to my students as an example of politically-motivated art theft. I’m recommending it to you, reader, because it was an engaging, informative, profile of an art thief in context. Another great art crime book from Anthony M. Amore!

[1] Could this be an area of research for someone? Maybe, but it would be very difficult research. I can’t think of a way to structure it that would be methodologically sound and have enough data to access. Hmm.

[2] Here is a master’s project for someone. Compare the incidences of politically-motivated art theft to politically motived art vandalism. I am going to guess that the second is more common and I wonder if it has to do with the continued public display of the vandalised artwork: the hanging of the message that the defacer is trying to convey.

[3] I’m serious. But it has to be a good proposal, and needs to fit within criminological frameworks or I probably can’t take it on.

[4] I’m learning Dutch because I moved to the Netherlands, thus from here on out I’m going to write Vermeer’s painting names in Dutch, just because. And look, now I learned that “concert” is a “het” word, which is not what I would have guessed.