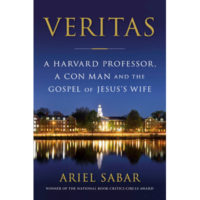 Veritas: A Harvard Professor, a Con Man and the Gospel of Jesus’s Wife
by Ariel Sabar
2020, Doubleday

During the pandemic, I’ve found it difficult to read anything longer than an academic article for work or for pleasure. I feel very fuzzy and unfocused and though I desire an escape from what fresh hell the news media brings, my attention span just can’t make it past page 20 of nearly anything. I have, however, been enjoying well-written, well-researched investigative journalism, and when Ariel Sabar’s excellent piece on the Dirk Obbink papyrus scandal came out in the Atlantic in May, I read it with relish and found myself casually clicking over to Sabar’s twitter account. There I was met with the truly exciting news (I think I actually said “OOOOH!” out loud when I saw it) that he had finished a book that expands upon his equally-excellent reporting on the Gospel of Jesus’ Wife scandal. I tweeted my desire to review that book for this blog, the author responded, and here we are.

“Veritas: A Harvard Professor, a Con Man and the Gospel of Jesus’s Wife” is, officially, the first whole book that I finished during the coronavirus. It was great. I truly enjoyed it. I devoured it, then was sad when it was over because I didn’t have it to read anymore. It is very likely that if you are reading this blog, you will want to read this book. It’s good.

Veritas is an ode to the strange, amusing, alarming, and enticing complexity of provenance. That objects have lives, or biographies, or trajectories is old news.[1] Yet some objects have far more interesting biographies than others. The Gospel of Jesus’ Wife, a 4th century Coptic papyrus fragment/21st century forgery, has a VERY interesting biography…and that’s Veritas. Through meticulous research (and over 450 interviews!!!!) Saber reconstructs the trajectory of this papyrus and its relationships with people. Lemmie tell yah, it’s gripping.

Thinking about it though, the fragment’s own story is not so very interesting. Neither of the two options, on their own, are all that notable. The options are:

However, it is the people that interacted with the fragment who make this story worth reading. The fragment has some pretty weird friends.

[I’m going to try to go spoiler free here to at least preserve some of the most surprising turns of the story for those of you who haven’t read Sabar’s prior reporting.]

The alleged forger of the fragment is an *ahem* unique individual…and he gets uniquer as the story progresses. He’s a rather “easy target” for discussion and Veritas spends a lot of time considering him, his motivations, his own context. I won’t say more about him specifically beyond this: don’t Google “hot wife”. I’m sorry I did. What is much more interesting, and what I think is notable about Sabar’s book, is the deep consideration of the context of Professor Karen King, the Harvard academic who brought the Gospel of Jesus’ Wife to the world and, thus, a seemingly-unbearable amount of ridicule to herself. Sabar begins and ends the book with King, and without King, none of this would have happened.

Coincidentally, I’m currently putting together a talk on “The Problem of Forgeries” for the Institut für Kunst und Recht (IFKUR), and was going through old lecture notes on the topic right before reading Veritas. Something I always emphasise to people who have to listen to me blather about this topic is that while some art crimes, like theft, are one directional between person and object (thief steals thing…), forgery is about relationships: relationships between forger and “mark”; relationships between “mark” and object. Unlike a passive victim of theft, the “mark” in a forgery case is an active participant. They have to fall for it. And the process of creating a space where “falling for it” can occur is the most interesting (to me) aspect of art forgery. The technical side of it? Yeah ok. The forger’s motivations? Ehh sure. But the dance between two people and one thing and the (exposed) desires and (misplaced) trust that emerges is *fascinating*. It’s enough to make a frazzled academic actually finish a book during a global pandemic!

And in Veritas, Sabar goes further in to King’s personal context than I would have expected. He goes so far that, as an academic, I started to wonder how Sabar would render my my own life, record, and motivations in the event that I end up falling for a fake papyrus and he has to write a book about me.[2] King herself might not recognise the King that Sabar reconstructs. But the funny thing about the sum total of our immediate needs and deepest desires is that we don’t actually know what motivates us. Sabar’s King doesn’t believe in truth, although she would probably say she does. Thinking about it, I usually say I don’t believe in truth, but I probably do.

Why did King fall for this fake? The easy way out would be to blame hubris or a lack of sophistication. She was greedy or she was stupid, and she fell for something that was obviously too good to be true. That’s what much of the media published, and what the rest of us academics were probably saying around the water cooler. Yet Sabar doesn’t fall for this over-simplification. King obviously is an extremely intelligent woman, and no academic, especially not one of her stature, would go so insanely “all in” if they didn’t believe in what they were doing. And that’s what Sabar explores, the nature of that belief within King: where it came from, what it meant to her, and why, when presented with the right object at the right time, that belief caused her to do astounding things. It was less about faith in a forger, but more about faith in her own, well, faith. A faith she felt was important to deliver to others, even if the messenger was flawed. Sabar doesn’t write her as a sympathetic character, but I feel bad for her none the less.

Going back to my lecture notes on forgery, and to the talk I am putting together for IFKUR, the practical lesson to be learned from Veritas is that **provenance is really important**. Sabar notes this in the book, but I will say it explicitly here: you can prove an antiquity on the market is inauthentic, but you cannot prove that it is “real”. The absence of any indication of forgery might mean the piece is authentically ancient, or it might mean that there’s a very good forger at work. The only, only, only way to prove that something is authentically ancient is if it was excavated from an undisturbed archaeological context.[3] Otherwise you’re at least partially stuffed.

So if we’re not dealing with something that has archaeological context[4], we first have to accept that authenticity can never be certain. Once we accept that, we have to engage in a 3 step verification process before we can bring the piece into our research and into the corpus and our understanding of the past:

Any one of these alone might turn up unarguable evidence that the object is fake. None of these alone or with just one other can turn up enough evidence for authenticity to allow us to study a piece as likely authentic. It is only when expertise, science, and provenance all come back clean and as expected that we can make splashy announcements across the pages of the world’s top media outlets and write the articles and books that make our careers. Meanwhile we must always accept that new evidence may expose the piece as a forgery.

In this case, those involved with the Gospel of Jesus’ Wife failed at all three steps. Expertise was sought, but it was the wrong expertise. Warnings from true experts were ignored.[5] Science happened long after the academic went (VERY) public with the piece, and results that suggested forgery were spun as confirming authenticity. Provenance research did not occur at all. There is no evidence that even the most basic provenance research was undertaken concerning the piece. Some quotes in Veritas from King: “I don’t see the point of a conversation. I haven’t engaged the provenance question at all”; and “Your article has helped me to see that provenance can be investigated”.

If this is sincere, I shed a tear. Provenance is so powerful. As Sabar notes, it is the hardest thing to forge, because to do so you have to rewrite history. Half a day devoted to some provenance Googling followed by some phone calls would have saved King massive humiliation, and yet, she and her colleagues considered the object’s history as being unimportant…ignorable.

Thankfully, Ariel Sabar noticed this gap, spent years doing his research, and in Veritas has provided a provenance for the Gospel of Jesus’ Wife that comes as close to truth as, I suppose, we are ever going to get.

[1] Brush off your Appadurai 1986, and flip to Kopytoff, you know, just for the memories

[2] Pretty unlikely. Not only do I not buy antiquities, I am also friendly with a number of top experts mentioned in this book, specifically those that warned of impending doom at key moments, only to be ignored. I’d certainly be listening to my Cassandra’ed colleagues.

[3] And if your archaeologist is faking stuff, you’ve got real problems.

[4] Remember, not everything that lacks archaeological context is looted. There are limited circumstances where we are having an authenticity discussion about material that isn’t the product of either crime or commodification. We could be talking about something located in an archive or ancient library that has either been in the library for centuries, or was faked and placed there for reasons. An example is the Mar Saba Letter, that Sabar refers to in Veritas.

[5] Shout out to Professor Malcolm Choat, of the Forging Antiquity Project, who I think is the best. At the point in the story where he tells King that things are wrong with the piece both physically and ethically, I found myself almost saying out loud “NO! NO! Listen to Malcolm, LISTEN TO MALCOLM!”

[*] Final note, Veritas seems to have cured my pandemic reading block. After finishing the book and being sad that I had no more of the book to read, I find myself devouring other books. Twelve hours after finishing Veritas I was halfway through another book. Pretty impressive since I have a 19-month-old and, you know, wrote this whole review. It’s really lovely to read again.