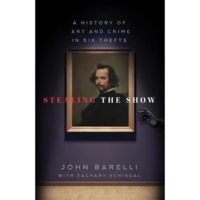 Stealing the Show: A History of Art and Crime in Six Thefts
by John Barelli with Zachary Schisgal
2019, Lyons Press

There is nothing I love more than a good art crime story. Don’t get me wrong, I don’t actually want art to be stolen, but if it is I want to hear about it, preferably from someone with enough insight and experience to both tell a good story and to make it meaningful. Someone who knows what they are talking about.

John Barelli certainly knows what he is talking about. With nearly 40 years in the security department at the Metropolitan Museum of Art (many of those as director), and with a PhD in Criminology from Fordham University focused on art theft (available here), Dr Barelli has experience and insight in abundance. The theft stories in “Stealing the Show” are good reads.

“Stealing the Show” is not an academic book, and I note that because I think that is a major positive point in its favour. Dr Barelli has managed to write a fairly light and entertaining memoir about exactly what I am interested in, without weighing the stories down with over analysis. In other words, this is the kind of book I like to relax with at the end of the day. It is a book that doesn’t feel like “work” (although it is work, of course). I gulped this book up in two sittings, reading with relish.

But that’s not to say that the book lacks any sort of analytical connecting tissue. It is a memoir, yes, but through the stories, Dr Barelli puts forward the thesis that art thefts are almost always based on opportunity. You may be thinking “well that is obvious”, but it really isn’t. Dr Barelli doesn’t support the idea that all art thefts are so-called “Crimes of Opportunity“, although I think he would probably argue that many of them are. Rather the media narrative of art theft as being the result of extensive pre-planning and preparation, or the idea that a motivated art thief will find a way to steal a target art piece no matter how hard the task is, just doesn’t hold up in his extensive experience.

The thefts from the met that Dr Barelli describes, none of which I had ever heard about before, mostly involve thieves who chance upon a situation that is exploitable and they exploit it. No repelling down from the museum skylight and creeping under laser beams to carefully cut the case open with a glass cutter. Nope, the opportunistic MET thieves do things like notice spaces between case doors that they can stick a wire in, or realise no one is really watching them if they request to look at baseball card albums, or just rip statues off their bases when no one is around. Many art thefts are “inside jobs”; indeed Dr Barelli seems to always consider this possibility first when evaluating a theft. Thus, in Dr Barelli’s opinion, that museum security is about reducing opportunities. While that might mean target hardening, as well as getting creative in detecting exploitable situations.

As my co-authors on a few recent papers have lamented, there is a strange lack of scholarship on the topic of museum security. It is a huge gap that, very seriously, needs filling. Even though it isn’t styled as an academic work, “Stealing the Show” is a valuable contribution to this area. Here’s a very experienced ex-head of security at a world-class museum talking about his experiences with crime? I am going to be citing this book in my research for sure.

At risk of getting lost in a tangent, one minor thing in “Stealing the Show” surprised me. In a section where he was discussing Banksy engaging in a reverse art theft at the Met, so he put an artwork of his ON the wall rather than steal one of the Met’s pieces, Dr Barelli said that “the Met and other museums did not look on this prank favorably”. Now this is the exact opposite of what I always thought was the case. I thought that for the minimal cost of perhaps having to dab a little paint on part of a wall, the museum not only got a totally free and very valuable Banksy work, but they also got the media publicity of reporting on the incident.[1] I suppose, though, that Dr Barelli is thinking about this from a security point of view and most people trying to illicitly hang artworks on the walls of the Met are not Banksy, but am I missing something here?

Banksy, if you are reading this which I suppose is not impossible, you are welcome to hang a piece on my wall. I’m cool with that.

Coming back to it, if you are like me and you just want to sit down in the evening with some new-to-you art theft cases recounted by someone on the inside of investigating them, “Stealing the Show” is the book for you.

[1] To be fair, upon reviewing the press around these acts, the real shocker is that the press clearly feels they have to introduce the reader to Banksy. While it is hard to remember a time before Banksy was all up in our media reporting and fetching big bucks at our auction houses, this happened in 2005. At the time perhaps Banksy was just “some guy” to the museum. I assume they’d be happy for Banksy to give them art for free now.