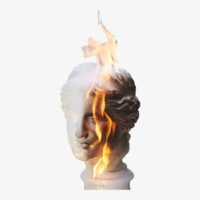 At least in many places. I swear this title has context.

Something that comes up quite often in classroom and public discussions about private collection of antiquities and the antiquities market is the belief that private collection preserves artefacts and the market protects heritage. While some collectors certainly conserve and preserve the pieces in their possession, in many countries there is nothing that says they MUST and that is a problem.

When talking about this I often point to Ai Wei Wei’s “Dropping a Han Dynasty Urn”:

“Look”, I tend to say, “if I buy an antiquity, there’s nothing stopping me from going outside and smashing it in the back garden.” People usually get the point, but, beyond Ai Wei Wei, I suspect they think “but, really, who would do that?”

Well I’ve just got another example via Episode 2 of Jon Ronson’s podcast The Butterfly Effect, and it’s memorable.

The only way to have private collecting AND the preservation of antiquities is to mandate a base level of care for cultural objects with punishments for violations. Some countries do this already, but not the big pro-private-property, market countries.