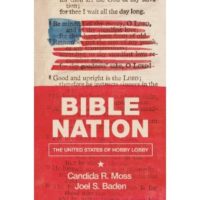 Let me make one thing clear before I begin: I should have read Moss and Baden’s “Bible Nation” three years ago. It’s been sitting on my shelf since it has come out and every time I saw it I’d say “I really need to read that”, and then I’d get distracted by something and it wouldn’t happen. All told my reading of everything went down in the past three years due to an uptick in other work, so it’s nothing against “Bible Nation”. I just haven’t had the time. But now I’m making the time. I have set aside an hour of ever work day for reading that is related to my job but isn’t directly on something I am researching or writing. I think it is important to be widely and deeply read.

A little while ago, the Museum of the Bible‘s Jeff Kolha gave an interview with NPR about unprovenanced antiquities in their collection. While blaming the museum’s dubious collection on “just one or two individuals”, he said that they were packing stuff up to send back to Iraq. Afghan cultural heritage, according to the interview, is not yet so lucky. The result was a lot of curiosity on my part, and “Bible Nation” moved to the very top of my “to read” list.

[UPDATE: Since I wrote this review, more news on this case, e.g. see here]

For how large Hobby Lobby, the Museum of the Bible, and the Greens have loomed in the public discourse on antiquities trafficking these past few years, I was surprised by how little I knew about these three interconnected entities: my timeline of the story was unfixed. For anyone wondering “what’s going on with all this”, here’s your book. And I do mean anyone. Despite being written by two academics, and despite being published by a University Press, “Bible Nation” reads like a popular press book, and that’s a good thing! It gives the book a fluid readability that makes it accessible to the interested anybody, while still providing a summary of the Green Family, their outputs, and their apparent motivations that is useful to us academics.

The central argument of this book is that the Museum of the Bible is not the “big tent” that is claims to be. Rather than being an impartial, non-sectarian exploration of the development of the Bible and it’s role in societies and diverse cultures over time, the Museum of the Bible supports a very specific American, Protestant, Evangelical narrative, which, besides being problematic from a scholarship point of view, is subtly anti-Catholic, selectively pro-Jewish, and pretends that Islam and Mormonism doesn’t exist.

The authors’ concern is not that private individuals would promote such a narrative through a private museum: that’s their business. Rather the concerning feature is the misleading claims of neutrality, of “letting the Bible speak for itself”, that the Greens and their employees appear to truly believe. More concerning still is how these false assertions permeate the Green’s other initiatives which are aimed at supporting academics and educating public school children. When the assertion that these programmes are neutral, and are not subtle or even overt assertions of the rightness of Evangelical Christianity, are convincing and when those assertions come with a LOT of money, cash-strapped school-districts, lawmakers, and scholars will go for what’s on offer. The separation between church and state and the tenants of academic freedom are then eroded or eliminated.

Through this, the Greens are shown to be sincere about their goals, but mistaken about their outputs. They are entirely unable to see their own biases, perhaps because they subscribe to a worldview where there is an ultimate truth. Why this book is particularly valuable is that the authors explore how the manifestation of that belief in truth leads to the kind of confident naïveté that causes one to buy heaps of stolen antiquities and documents, as well as piles of fakes, with impunity. It then allows them to say “well, we’ve learned from this experience” without changing any aspect of the worldview that allowed the situation to happen.

Although it is not a direct concern of the book, you get a strong sense that because the Museum of the Bible rejects the amazing multiplicity of art, culture, and thought that went in to the documents that, in some form or other, are called the Bible, the authors feel that the public is really missing out. Moss and Baden are two people who have devoted their scholarly lives to all the things that make studying the Bible academically interesting…including contradictions and competing voices and narratives. A Bible museum that is truly “nonsectarian” would be a venue for exploring that spectacular complexity which we scholars see as approaching “truth”. The Museum of the Bible is very certainly not that. It is a very public display of the opposite. Not just a missed opportunity, but a reenforcement of an uncomplicated narrative which history simply doesn’t support.

I wish that I had read this book before I visited the Museum of the Bible. I experienced that museum as an interested party, but without the full context of what I was seeing. Through “Bible Nation”, I can reevaluate my experience there and, perhaps more importantly, my overly-simplified idea of what caused the succession of scandals that have plagued this museum and its collection.

So if you have yet to read “Bible Nation”, now is a good time to pick it up to catch up. The ebook version, at least, has a new afterward bringing things up to nearly the present and other editions might as well. This is very certainly not the last we are going to hear about Museum of the Bible weirdness and “Bible Nation” provides the background you’ll need to follow whatever crazy thing comes next.