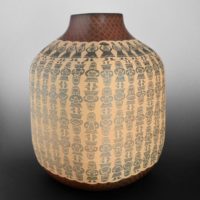 For the past few days I’ve purposefully stayed out of the mini debate going on in the pages of Antiquity about “responsible” antiquities collecting and professional engagement with “responsible” collectors. There really aren’t enough hours in the day and I felt there was unlikely to be anything very new there. This discussion isn’t new and isn’t particularly interesting to me.

I did finally read it all tonight at the prompting of a colleague. I probably should just leave it as late night blogging is danger blogging. However, in the original “Debate Article”, the authors misspelled my co-author’s name while dismissing our work as dismissive[1][2]. I feel this opened the door. Here goes.

I am not sure how, in 2020, a piece like this can be written and published without any engagement whatsoever with issues of Indigenous rights, sovereignty, and control, particularly when a clear focus of the article is the American Southwest.

The authors present the debate as a contentious dichotomy between collectors of ancient material who don’t break the law and archaeologists who paint all those collectors with a negative broad brush because they believe collecting challenges archaeological science. But Native people are entirely absent here. That Native people might object to looting of Native sites, display of Native objects, and the sale of Native culture for reasons beyond archaeological science is not discussed. That Native and non-Native archaeologists might not wish to partner with collectors of Native objects because they think the continued white domination and commodification of Native culture is wrong is not considered a possibility.

The authors are quick to point out that collecting archaeological remains on private land is legal in the United States and leave it at that. Collectors who amass collections from private land, in this construction, have the potential to be the good kind of collectors that archaeologists should engage with because they are staying on the “right” side of the law, provided they do other things right such as record and share archaeological context.

But what if the law is wrong, not because it blocks we archaeologists from our precious archaeological contexts, but because it forces white concepts of ownership and control onto Native objects located on what should be Native land? Why should we as archaeologists (or humans) accept that because the desecration and commodification of Native sacred objects and places isn’t against a law that was made by and for white people, that the practice is acceptable? Why should we work with anyone who is active in the continued colonization of Native culture just because that working relationship might bring a few archaeological rewards?

The authors rightly note that “pot-hunting” and collecting is deeply meaningful to the people who engage in it, and that in the American Southwest it can be a multi-generational activity that has important and complex cultural components. However, the same can be said for the men who would dress up in Confederate Army uniforms and stage mock drills in the field across from the neighborhood I grew up in in Georgia. There were never any Union soldiers. No one was breaking any laws, but how do you think my Black neighbors felt seeing that out their kitchen window?

It is possible for an activity to be totally legal and totally wrong.

The history of white collection of Native American heritage is a prominent strain in attempts to annihilate Native culture. Through the act of collecting, Native Americans were re-defined as a “dying race” to be preserved behind glass by white people…white people who had the magical white ability to care for this culture correctly and to contextualize it property, something that Native people were seen as incapable of. Ever since then, Native Americans have engaged in an exhausting struggle to wrest the physical manifestations of their culture out of the hands of the white people who stole it, and to bring that culture back to contemporary Native control. This includes the prevention of further destruction of Native cultural sites to satisfy collectors.

So no, I’m not going to give white people a pass on looting and collecting Native heritage. This has nothing to do with stereotypes. I’m not okay with an activity that denies Native rights to Native heritage, maintains structures of white domination, and continues the forced recontextualization of native culture.

[1] They seem to object to our application of Sykes and Matza’s ‘Techniques of Neutralization’ to antiquities collectors. Sykes and Matza might suspect that the authors are, themselves, employing one of their defined neutralization techniques: “Condemnation of the condemners”.

[2] I know the authors know how to spell his name so the misspelling is just odd.

[3] Yes they are. Nearly all of them. Don’t go digging up names of like two guys out there who aren’t, there are books and articles and PhDs written about the whiteness of these folks.

[4] No, it is not Nephite heritage and I don’t want to go there with this.

[5] And, to be clear, I write this from my own white privilege position.