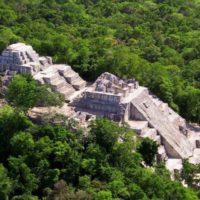 Two days ago Vice News posted a video story that has been causing quite a stir. It focuses on the Guatemalan Maya site of El Mirador, a bill currently in the US Senate Foreign Relations committee, and the conservation-through-tourism plans of an American archaeologist, Dr. Richard D. Hansen {1}.

The video is a jarring watch. From the moment that Hansen makes a sexist joke about women and decorating {2}, the on-site interview becomes “older white male says all the wrong things”. Contrasted with the statements made by Guatemalans involved in the current conservation regime of the region, and especially the refreshingly professional commentary by archaeologist Dr Tomas Barrientos {3}, Hansen’s statements seem thoroughly dismissive of the expertise and professional capacity of Guatemalan experts, and the needs of the communities in and near the Mirador Basin.

This morning I woke up to the controversy that this Vice report caused. As it turns out, Hanson’s plan for the Mirador Basin, partially presented here on his Maya Conservation Partnership website, is a major can of worms. On the Guatemalan side, it smells of American imperialism and the conquest of Guatemalan resources for profit. On the USA side, the plan bills itself (in GIANT LETTERS on the website) as a means to “dissuade illegal immigration into the U.S.” Oh no…no.

The website mentioned above appears to be a quickly-put-together lobbying tool in favour of the “Mirador-Calakmul Basin Maya Security and Conservation Partnership Act of 2019” which is currently in the US Senate Foreign Relations Committee, having been introduced by Senator Jim Inhofe (Republican, Oklahoma), and co-sponsored by Senators Tom Udall (Democrat, New Mexico) and Jim Risch (Republican, Idaho). On direct reading of the bill, it appears to provide a pot of money, $12 million per year from 2021 until 2026, to establish a grant program “for investments in the basin”:

(1) the governments of Guatemala and Mexico; and

So far so good, right; however, there’s something VERY WEIRD going on here.

Who supports this and why?

So on first glance, it is not immediately surprising that if someone supported this bill, it would be the democrat Udall. Udall was the Congressperson who introduced the “Protection of the Right of Tribes to stop the Export of Cultural and Traditional Patrimony Resolution or the PROTECT Patrimony Resolution”, “supporting efforts to stop” the trafficking of Native American cultural items. Makes sense that he might be into doing some of the same in Central America. Udall, however, is also a member of the Church of Jesus Christ of Latter-day Saints, and as the Vice video rather bluntly notes, the Church has a long-standing interest in ancient Mesoamerica. I’ll just lay that on the table, but leave Udall.

The real question is why on earth would Inhofe and Risch, neither of whom are Mormon, support sending a massive amount of money to Mexico and Guatemala, seemingly for archaeology preservation. Inhofe denies climate change, for heaven’s sake, and is pro-drilling in US wildlife reserves. He is everything that is wrong, just simply everything that is wrong, why does he approve of spending US money on Guatemalan and Mexican heritage?

In the Vice piece, Inhofe is cited as saying that he supports this bill because he believes that it will reduce illegal immigration into the United States, presumably by increasing financial incentives to stay in what I must point out is a relatively small and sparsely-populated part of Central America. Inhofe’s views on immigration into the United States are pretty horrifying, but neither I, nor others, buy this excuse. It’s too much of a stretch. Something else is happening here. There is money involved, there has to be. And that brings us back to the accusations of US imperialism and the risk of privatisation of Maya culture for the benefit of white North Americans.

Archaeologist Daniel Salinas Córdova posted a link on twitter to a petition created by Beatriz Arango, calling for the stopping of this bill. To quote the text of the petition: “Guatemala does not need to be colonized in 2020, protect our Mayan ruins from capitalistic US greed.” It already has nearly 15,000 signatures by the time of writing. Yet the approach and wording of this petition is exactly the sort of thing that a man like Inhofe is built to totally dismiss. Sign it if you like, it shows solidarity, but isn’t going to change anything in the Inhofe office.

What we really need to see here is some intense investigative reporting into the US side of this. Every American journalist who covers anything to do with politics, conservation, and the environment should be saying “Inhofe wants to send tens of millions to Guatemala and Mexico to preserve a jungle biosphere….WAIT WHAT?!?”. What are the connections? Where is the money flowing? What promises have been made? Sure this bill may (and may even be likely to) die in committee, but how did we get here at all?

How does Mexico play in to all this?

The Vice piece only mentions Guatemala, but if you read the bill, it is equally about Mexico. This bill would not only cover the Guatemalan UNESCO World Heritage Site of El Mirador, it would cover the Mexican UNESCO World Heritage Site of Calakmul! As of this morning at least, the few Mexican archaeologists that I spoke with online were aware of the bill but thought it only involved Guatemala. They said there’s no discussion in Mexico about this, and my own quick sweep of the Mexican press found nothing. $12mil a year for archaeology that no one knows about? We know that Hansen’s plan is the foreseen beneficiary on the Guatemalan side of the border, but who is gaining on the Mexican side?

In a twitter conversation between myself, Daniel Salinas Córdova and zooarchaeologist Julian Dorantes this morning, there was some suggestion that the planned beneficiary may be the controversial “Maya Train” project, which would seem to mirror aspects of Hansen’s project (and is mentioned on Hansen’s website). At least from this angle, that looks pretty likely, but again we need some investigation of this in Mexico. Who knows about this in Mexico? Who is supporting it? Where is the theoretical money headed?

In Part 2, I’ll write some of my thoughts about the anti-looting aspects of the proposed bill, and I have a lot to say about that. For now I’d love to hear from anyone who knows more about this within Mexico, Guatemala, or the USA: am I missing something here? Email me.

{1} I do not personally know Dr Hansen; as far as I know I’ve never met him.
{2} See minute 02:45. The face that the reporter makes at that point says it all.
{3} See minutes 10:56. I also do not personally know Dr Barrientos; as far as I know I have never met him. I am, however, quite familiar with his work at the site of La Corona, the infamous “Site Q”.