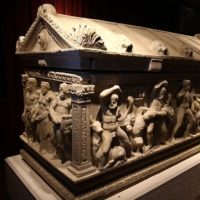 The myth of the art thief: It’s not a gentleman’s crime
(24 September 2017; Salon)
“There have been almost no known, real-life art thieves who steal art in order to admire it.”

How researchers can stop the plundering of cultural treasures
(25 September 2017; Phys.org)
“Professionals have to say no to authenticating cultural artefacts of questionable or dubious ownership history”

The Surprising Truth About Fake Art and How to Avoid Being Scammed
(25 September 2017; Town and Country)
“So polluted by fakes is the art world that every serious collector is likely to have been burned at least once”

We’re in the Age of Fake Photos and Videos—Here’s How to Spot Them
(25 September 2017; Artsy)
Fake news comes with fake photos

Meet Kevin McCormick, the man who made it his mission to return Canada’s lost military medals (Canada)
(25 September 2017; CBC News)
For example, he reunited Defence Minister Harjit Sajjan with “the Memorial Cross that was awarded to a grieving mother 100 years ago after she lost a son at the battle of the Somme.”

Heist at Whistler art gallery spurs police to ask for public’s help (Canada)
(26 September 2017; Global News)
Police have not released info about what exactly was stolen. Perhaps it wasn’t art?

RCMP inks deal to return Louis Riel artifacts to Métis people (Canada)
(23 September 2017; CBC)
“The items at the Regina museum include a crucifix belonging to the executed Métis leader, his poetry and a hunting knife.”

After 87 years in a Smithsonian collection, bones of Igiugig ancestors return home (USA)
(19 September 2017; KDLG)
Remains of 24 individuals that were excavated by Aleš Hrdlička without permission.

US museums challenge Trump’s immigration ban in court (USA)
(22 September 2017; The Art Newspaper)
“Around 100 institutions filed documents to outline the order’s threat to the museum community”

Guggenheim withdraws animal works from Chinese art show after ‘threats of violence’ (USA)
(26 September 2017; The Art Newspaper)
Dogs That Cannot Touch Each Other is a video and performance where pitt bulls faced each other on treadmills and couldn’t reach each other.

‘Stolen’ 9/11 Subway Art Was Unauthorized and Removed by Cleaner, NYPD Says (USA)
(26 September 2017; DNA Info)
So not stolen after all. However, an authorised mosaic of my ex boyfriend’s eye was among the unauthorised art and is visible in this article’s photo.

Ghent: Two paintings returned to their owners after 78 years (Belgium)
(27 September 2017; The Brussels Times)
They had been left at the Museum of Fine Arts (MSK) for a temporary exhibition in 1940

Marseille: A stele of Egyptian Stolen from a Museum in the Middle of the Day (France)
(24 September 2017; The Sherbrooke Times)
Very little information offered about this theft at the museum of the Old Charity

The Yeats Collection sale is only the latest sign of Ireland’s broken heritage export system (Ireland)
(25 September 2017; Apollo)
This rare archive of the Yeats family will be broken up and dispersed after multiple Irish institutions didn’t buy it.

Looted statues, pottery returned to Italy after probe in NYC (Italy, USA)
(25 September 2017; The Province)
“No one has been charged in the case, and prosecutors declined to identify the galleries.”

Aivazovsky painting stolen from Russia in 1976 found in Switzerland (Russia, Switzerland)
(29 September 2017; RAPSI)
“View of Revel” was located for sale in a Swiss auction

Ukraine and Russia fight over Crimean heritage (Ukraine, Russia)
(28 September 2017; The New Indian Express)
“Kiev insists the collection — valued at some $1.3 million (1.1 million euros) — was illegally spirited away into Russian-controlled territory as Moscow took over and then annexed the Crimea peninsula”

The story behind the world’s oldest surviving wharenui at Te Papa (New Zealand)
(29 September 2017; Newshub)
Stolen from a Gisborne iwi in the 1800s, should it be taken home from the National museum?

Picton artist Sirpa Alalääkkölä ‘heartbroken’ at theft of paintings worth ‘hundreds of thousands’ (New Zealand)
(27 September 2017; New Zealand Herald)
When the artist came back from a trip she found the 150 to 200 paintings missing.

Alleged art heist no heist at all (New Zealand)
(29 September 2017; Stuff.co.nz)
Artist said her paintings had been stolen, but her estranged husband took them as part of a division of property.

Chinese monument being used as climbing wall by visitors (China)
(27 September 2017; South China Morning Post)
The Zhengding city wall, under consideration for UNESCO listing, is being climbed by tourists in large numbers.

How China and America Can Protect the World’s Antiquities (China, USA)
(28 September 2017; Foreign Affairs)
“U.S. and Chinese collectors and auction houses play an important role in fuelling the illegal global trade in antiquities”

Security headache of idol’s valuables in pandal (India)
(25 September 2017; The New Indian Express)
Festival time is when many pieces of sacred art are exposed and vulnerable to theft

No CBI Probe into Melukote Temple Theft (India)
(26 September 2017; Bangalore Mirror)
“The Karnataka High Court has refused to order the handing over of the investigation into the theft of ornaments in the Cheluvarayaswamy Temple in Melukote to the Central Bureau of Investigation (CBI)”

Four held for stealing silver palanquin (India)
(28 September 2017; The Hindu)
3 kg of silver was recovered from the accused

Four including temple staff held for stealing silver palanquin (India)
(29 September 2017; The Times of India)
From the Sri Sankaranarayanaswamy Temple at Sankarankovil

Sale of heritage furniture to invite punishment (India)
(29 September 2017; The Tribune)
Any sales of Le Corbusier or Jeanneret furniture in Chandigarh will bring punishment under the Antiquities Act.

Suspended DSP produced in court (India)
(23 September 2017; The Hindu)
Basha and another police officer sold idols to smugglers after confiscating them from another smuggler

Idol theft case: Arrested cop didn’t cooperate with investigators, says police officer (India)
(23 September 2017; The Times of India)
To be expected when an antiquities cop is arrested for an antiquities crime.

4 robbers held, booty worth Rs 7.5 lakh seized (India)
(28 September 2017; The New Indian Express)
Some of the accused may have been involved in as many as 30 and 70 theft cases, some of which involved temples

Cultural guardians (Afghanistan, Syria, Pakistan)
(24 September 2017; Dawn)
On the death of Nancy Dupree, thinking about those who risk their lives to preserve heritage

The archaeological treasures IS failed to destroy (Iraq)
(29 September 2017; BBC News)
Amid the destruction of Nineveh and Nimrud, archaeologists make new discoveries. Meanwhile, new British-led excavations have started at several sites in Iraq.

Ancient Hercules sarcophagus returns home to Turkey with splendid welcome (Turkey, Switzerland)
(24 September 2017; Daily Sabah)
Believed to have been stolen from Perge, the artefact is back after being smuggled to Switzerland

Minister receives Briton who returned ancient jug (Turkey, UK)
(26 September 2017; Daily Sabah)
The woman bought the jug from a souvenir shop in the 1960s but decided that it belonged in Turkey

The art of anti-terrorism (General)
(27 September 2017; Apollo)
City planners are thinking up new ways of stopping terrorists – with art and street furniture.

Smugglers preying on fossils in Narmada valley, officials (India)
(26 September 2017; Outlook)
“Smugglers from Maharashtra and Gujarat steal fossils and sell them in international markets at a high price”

Earthquake In Mexico Hit Churches Hard in Puebla State (Mexico)
(25 September 2017; NPR)
We will have to wait and see the true extent of the damage to Mexico’s sacred heritage

Serious quake damage to Morelos heritage (Mexico)
(28 September 2017; Mexico News Daily)
“The final assessment of all the damage sustained by pre-Hispanic and colonial construction might be some time coming as authorities say the magnitude of the catastrophe has put a strain on the resources needed to respond.”

Mustang ruby mine raided, guard killed (Mozambique)
(27 August 2017; The Australian)
“A safe containing 19,000 carats of mostly low-quality rubies had been stolen in the raid”

In the battle over stolen work, social media may just be indie designers’ greatest weapon (USA)
(25 September 2017; The Daily Dot)
Name and shame may be the only truly effective way to flight fast fashion art theft