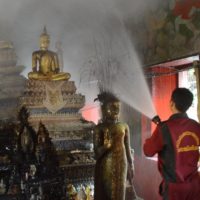 Hot this week: Late and truncated because start of term!

Poor Egyptians dig up homes in search of antiquities (Egypt)
(4 September 2017; The Sunday Times)
Digging for antiquities under homes has been an issue in Egypt for a while. It is sometimes fruitful and often very dangerous.

‘Free Our Sacred’ Campaign Calls for the Liberation of Sacred Afro-Brazilian Objects (Brazil)
(6 September 2017; Rioonwatch)
Taken during the First Brazilian Republic and during the era of President Vargas

Night at the museum: Why the great skylight caper at the MMFA remains unsolved, 45 years later (Canada)
(4 September 2017; CBC)
Through a skylight in the Montreal Museum of Fine Arts, tied up the guards, stole $2mil in art.

Theft of Artifacts Sets Back Scientists Tracing Human History (Mexico)
(7 September 2017; Observer)
Pictures of the skeleton were posted, then they were looted, then the remaining bones were found to be 13k years old. What a loss.

Thief steals $300,000 of jewelry made by ‘Art in the Pearl’ vendors, report says (USA)
(4 September 2017; The Oregonian)
Pieces taken out of the trunk of the jewelry maker’s car

Stubborn Stand-off Over Stolen Gardner Museum Art Could End With Sentencing Of Hartford Gangster (USA)
(3 September 2017; Hartford Courant)
“Authorities could lose any leverage they have over a formerly obscure gangster who many believe once possessed, at least briefly, two of the stolen paintings”

Marcellin Desboutin’s stolen painting found after 28 years (France)
(4 September 2017; Blouin Artinfo)
It was found at the Musée Anne de Beaujeu in Moulins after they published a research notice and was stolen from the Anne de Beaujeu Museum in 1989.

German Police Uncover $3 Million Art Heist, Including Baselitz Work (Germany)
(5 September 2017; The New York Times)
“A 39-year-old man from the western city of Düsseldorf used insider knowledge to steal 19 pieces of art owned by Mr. Baselitz from the depot near Munich between June 2015 and March 2016”

Cospicua men charged with stealing €34,000 worth of items from parish church (Malta)
(7 September 2017; Malta Today)
They defaced the titular painting of the Collegiate Church of the Immaculate Conception in Cospicua

Two in court on Cospicua church robbery charges (Malta)
(7 September 2017; Times of Malta)
They gained access to the church via scaffolding which they used to climb to the roof.

The Netherlands Is Still Hoarding a Massive Collection of Art Looted From Jews by Nazis (Netherlands)
(7 September 2017; Haaretz)
On the Netherlands’ continuing Nazi art problems

Heartless thieves steal mosaics designed by Perthshire school children (UK)
(6 September 2017; The Courier)
The sparrowhawk and the osprey were taken from the Muthill community cycle path.

Bruce Seals may be fake but ‘still important for Scotland’s history’ (UK)
(7 September 2017; Dunfermline Press)
Real or replicas, the seals are important.

India’s antiques, neglected at home but treasured abroad (India)
(4 September 2017; The Indian Express)
Negligence may be at the root of Chandigarh’s loss of Le Corbusier furniture.

Amid ‘smuggling’ controversy, govt to go in for antiquity audit (India)
(7 September 2017; The Tribune)
Apparently Vijay Nanda was into Le Corbusier furniture loot, not just antiquities

Campaigners call to preserve rubble from archaeological buildings (Nepal)
(15 September 2017; OnlineKhabar)
“Nepali Army personnel were throwing rubble from such monuments, which was kept at Tundikhel of Kathmandu, like other rubbish.”

Artifacts stolen by IS from Mosul museum recovered (Iraq)
(3 September 2017; Iraqi News)
A displaced family returned them to the police.

Caravaggio the criminal: The violent life and crimes of an artistic genius (Italy)
(3 September 2017; Salon)
The artist as a criminal

Morocco opens an investigation into the selling of dinosaur fossils on the Internet (Morocco, Ireland)
(6 September 2017; Al Arabiya)
Dino only found in Morocco, Morocco doesn’t allow export, how is it for sale in Ireland?

The amazing story of how Soviet Russians pirated music in the 1950s (Russia)
(8 September 2017; Tone Deaf)
On stolen X-rays!!

The Cactus Poachers of Phoenix who are Ruining the Arizona Desert (USA)
(14 September 2017; The Independent)
Thriving black market for endangered cactus.