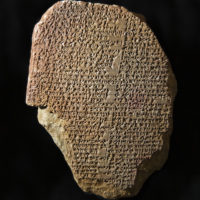 Handy bullet points! Yes, you should all be upset but this isn’t a surprise.

My email and twitter are going wild which can only mean there’s been a big antiquities bust of some kind. And so it is: Federal prosecutors have filed a complaint against Hobby Lobby/David Green (of Museum of the Bible and stripping women of access to birth control infamy) to the tune of 3,450 Iraqi tablets and $3 million dollars.

I’ve got a busy day ahead of me, but I’ll offer up a few bullet points on this case. Note, I was not a consultant on this case, I didn’t investigate it, and (full disclosure) the Green Collection once paid for my (plus other experts’) dinner, even as we criticised them[1]. If you have further questions, email me.

There you have it, some quick early-morning notes. Again, if you need more info on the topic, get in touch with me.

PS: gotta love the Defendants in the complaint:

[1] We discussed if this was an ethical violation at the time, but settled on ‘paying for our food is the least they owe us and everyone else at this point’. It didn’t change how much we slammed them.

[2] If you are a multibillionaire that seeks to pay an independent expert to tell you not to buy antiquities, I’m your woman. Actually, I’ll give it away for free: don’t buy antiquities. If you like the ancient past, fund archaeological digs with your money or pay for upgrades to museum facilities and heritage training in low income countries.