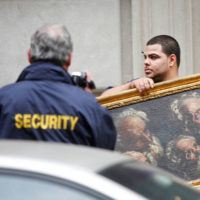 Why Stealing Art Is a Terrible Idea
(7 May 2017; Artsy)
Anyone who is reading this already knows it’s a bad idea.

Ministry of Antiquities retrieves stolen artifacts from France (Egypt, France)
(10 May 2017; Daily News Egypt)
Stolen from the Saqqara Necropolis, the items were on sale at a Paris auction house.

Inside a New U.N. Program in Mali That’s Training Its Staff to Protect At-Risk Art (Mali)
(5 May 2017; Artsy)
Blue helmets and cultural protection

The Treasures of Timbuktu (Mali)
(12 May 2017; The New York Times)
Preventing a total cultural catastrophe

Is the worlds richest artist using his privilege to manipulate us? (Nigeria)
(10 May 2017; Pulse)
“Appropriating, copying and trying to erase and re-write who created this style of art” says Laolu Senbanjo

A Group of Seven mystery (Canada)
(6 May 2017; The Globe and Mail)
Are the J.E.H. MacDonald sketches in the Vancouver Art Gallery authentic?

Fort Heritage plaques stolen (Canada)
(11 May 2017; Fort Saskatchewan Record)
The heavy bronze pieces may have been targeted theft for scrap.

Desaparece la zona arqueológica de Tepetxilotla (The archaeological site of Tepetxilotla has disappeared; Mexico)
(9 May 2017; XEU)
The Toltec site has been severely plundered.

Recuperan piezas saqueadas de los alrededores de la tumba del Señor de Sipán (Peru)
(12 May 2017; RPP)
It is unclear what caused the South Carolina man to suddenly return the stolen items which he had for decades.

The Portland Art Museum Has $27 Million, But No Legal Right to Build Its Rothko Pavilion (USA)
(5 May 2017; ArtNet News)
A planning error in their planning.

Wanted: Lichtenstein’s long-lost spinnaker (USA)
(8 May 2017; The Art Newspaper)
The piece sailed in the America’s Cup in 1995. Where is it?

Robert Redford: Don’t take Bears Ears away from us (USA)
(6 May 2017; The Salt Lake Tribune)
The actor, a Utah resident for over 50 years, is troubled by what congressional leaders and Trump are threatening

27 national monuments may have protections cut or curtailed under Trump’s review (USA)
(6 May 2017; Chicago Tribune)
“He’s disregarding the Native Americans, the first people of this nation. This is sacred land.”

Protecting public lands isn’t ‘abuse’ (USA)
(10 May 2017; The Baltimore Sun)
We’re losing our most precious things. Once they are gone, they are gone.

The Future of Dozens of National Monuments Depends on You (USA)
(10 May 2017; Outside Online)
Please speak up about the threat to our national monuments coming from the government.

‘This is our land’: New Mexico’s tribal groups gear up to fight for their home (USA)
(13 May 2017; The Guardian)
Pueblos of the Rio Grande valley are worried about the review of 27 national monuments.

Dismantling Americas monuments to white supremacy (USA)
(10 May 2017; Apollo)
Heated debate over homages to the confederacy in the American South

On the Removal of the Jefferson Davis Monument in New Orleans (USA)
(11 May 2017; Hyperallergic)
Reducing the immortalisation of negative figures. Contextualise them in a museum instead.

Million-euro crown stolen from Lyon museum (France)
(14 May 2017; RFI)
Museum of Fourvière in Lyon confirmed that the crown of the Virgin made in 1899 is gone but the gemstones in it have been logged.

Tiara adorned with 367 diamonds stolen from German museum (Germany)
(8 May 2017; The Daily Mail)
The tiara was taken from a locked cabinet in the Badisches Landesmuesum.

Man arrested for possession of rare antiquities in Greece (Greece)
(11 May 2017; Tornos News)
The man had a full Cycladic figurine that was so large and intact that some might question its authenticity.

National Museum may close exhibition room and restaurant ‘to provide anti-terrorist security measures’ (Ireland)
(8 May 2017; Irish Independent)
This has to do with the museum being used as the temporary relocation of the Seanad chamber from Leinster House.

Are the Dutch Lagging in Efforts to Return Art Looted by the Nazis? (Netherlands)
(12 May 2017; The New York Times)
“Once ridiculed for its obtuse efforts at recovery, the Netherlands in the late 1990s embraced progressive and pioneering efforts “

Holocaust Survivors in Poland Find Restitution Claims ‘Like a Carousel’ (Poland)
(10 May 2017; The New York Times)
“Poland is the only European Union nation that has not established formal procedures to resolve claims made by people whose property was seized during the Holocaust”

Russian performance artist granted political asylum in France (Russia, France)
(8 May 2017; The Art Newspaper)
Pyotr Pavlensky’s asylum has been granted; it’s assumed he is being targeted because of his performance art against the Russian state.

Russia’s Hermitage Museum recognized as victim in embezzlement case (Russia)
(12 May 2017; RAPSI)
This was during construction and restoration at the museum.

A New Particle Accelerator Will Help Identify Art Forgeries, Because Science (Switzerland)
(10 May 2017; ArtNet News)
They hope to develop a “portable accelerator that could help identify the materials in an art piece without the risk of damaging it.”

Cops hunt man who stole art from St Giles Cathedral in Edinburgh city centre where Outlander was filmed (UK)
(8 May 2017; The Scottish Sun)
He “viewed the Scottish Diaspora Tapestry before removing the The Kirk tapestry panel”

Banksy’s Brexit mural vandalised just hours after £1million EU artwork appears in Dover (UK)
(9 May 2017; Express)
Someone spray painted “THE CLASH” in the ladder bit of it because, why not?

Pair appear in court over alleged art theft near comedians north-east home (UK)
(10 May 2017; Evening Express)
Because this is Scotland, the most important part of this story is that Billy Connolly lived nearby.

It ain’t me babe: Dealer uncovers Dylan art forgery (UK)
(11 May 2017; The Guardian)
The auction house that sold the fake Dylan takes no responsibility and won’t offer a refund.

Harry Potter prequel stolen in Birmingham burglary (UK)
(12 May 2017; BBC News)
JK Rowling has called for no one to buy the stolen document.

Museums show limited interest in borrowing Parthenon Marbles (UK)
(5 May 2017; The Art Newspaper)
The stunt of sending a piece to Russia seems to have not paid off.

Skeletons in the art world’s closet, let out after two centuries, are shunned (UK, Greece)
(9 May 2017; Blasting News)
On why no one seems to be borrowing the Parthenon Sculptures

“Tomb raider” arrested after 23 years on the run (China)
(14 May 2017; Xinhua)
The man was involved in the 1994 looting of an ancient tomb that involved the theft of a female corpse.

SSB, Customs seize idols worth Rs 35 cr, one arrested (India)
(8 May 2017; Millennium Post)
The statues were stolen from Bhagalpur 8 years ago.

Six Bihar varsity staff absolved of stealing rare manuscript 14 years ago (India)
(9 May 2017; Hindustan Times)
Two out of the six who are accused of manuscript theft have since died.

Cops recover stolen idols worth Rs 180 crore (India)
(13 May 2017; The Times of India)
Recovered after the arrest of three people, the idols are estimated to be 800 years old.

Cultural crime: Asma Ibrahim narrates the sad tale of antiquities being stolen (Pakistan)
(10 May 2017; The Express Tribune)
On the sad story of the “Persian Princess” mummy, that wasn’t Persian and was probably modern.

Police recover stolen ancient coins, lamps, other antiquities near Hebron (Palestine)
(12 May 2017; The Times of Israel)
Coins, lamps, and other metal items were recovered from a home in the village of Beit Ula during a raid.

Ancient stele turns out to be fake (Turkey)
(11 May 2017; Hurriyet Daily News)
The piece was unearthed during construction work…but is a fake.

Ancient fossil chipped out of rock with heavy-duty tools at Hallett Cove Conservation Park (Australia)
(9 May 2017; ABC Australia)
“This is an internationally significant bit of geological history and it would be a shame if people negligently destroyed something which has a value to the whole world”

Speaking of Science Baby Louie, an infant dinosaur with a checkered past, finally gets a proper name (China, USA)
(9 May 2017; The Washington Post)
“We don’t really know the legality of the specimen as the fossil laws in China […] I honestly don’t know what the laws were.”

‘Mammoth Man’ detained as he smuggled tusk pieces under his clothes (Russia, China)
(8 May 2017; The Siberian Times)
He had taped the tusk to his body and was trying to move it in to China.

Can Art Legally Threaten the President? (USA)
(3 May 2017; Artsy)
Can art contain an implied threat to the president?

The Met Files a Formal Proposal to Charge Admission to Out-of-State Visitors (USA)
(5 May 2017; The New York Times)
“It is unfortunate that the museum’s leadership feels that it has to ration its availability”

The Case of the Spontaneous Goldfish: Is This Art Museum Ignoring an Opportunity? (USA)
(8 May 2017; Nonprofit Quarterly)
“When it comes to the battle of Virginia Museum of Fine Arts vs. the goldfish of the Gottwald Reflecting Pool, the fish appear to be winning the war”

Stolen UVM rhino horn could be headed for black market, officials say (USA)
(12 May 2017; The Vermont Cynic)
Noting that Asia is where the horn is worth the most.