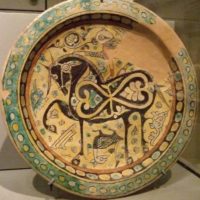 Receive ‘Culture crime news’ as a weekly newsletter! Sign up here
You can search the full Culture Crime News media database at news.culturecrime.org.

Thief rides off with ‘priceless’ sculpture from Edmonton gallery (Canada)
(10 November 2016; CBC)
Though confronted by a gallery staff member regarding the Sabourin sculpture, the suspect got away with the Raven before police could arrive.

El saqueo de nuestra riqueza arqueológica y cultural (The plundering of our archaeological and cultural wealth; Colombia)
(7 November 2016; Vanguardia)
The looting and trafficking of Colombian cultural is a lucrative business, which results in the loss of cultural richness as pieces make their way to Bogota. Discrepancies between law enforcement and criminal code make it a difficult crime to prosecute.

I think the Met’s $95M van Gogh masterpiece is a fake (USA)
(6 November 2016; New York Post)
Author James Grundvig believes van Gogh’s Wheat Field with Cypresses at the Metropolitan Museum of Art to be a forgery by Emile Schuffenecker.

Police Search For Man Who Stole Scepter, Other Items From Brooklyn Church (USA)
(6 November 2016; CBS)
A gold scepter, idol, and cash stolen from a cathedral in Sheepshead Bay were returned after the thief left the items on a nearby apartment roof.

The War of Santa Anna’s Leg Takes a Big Step Forward (USA, Mexico)
(6 November 2016; Wall Street Journal)
The prosthetic leg of a Mexican general, which sits in a military museum in Illinois, has been demanded to be returned to Mexico by university students from Texas.

NAGPRA Revisited: Negotiating Culture, Legalities, and Challenges at Wesleyan and Beyond (USA)
(8 November 2016; The Wesleyan Argus)
Universities claim compliance to NAGPRA is more complicated than it may appear.

Arnold Mesches, Artist Who Was Recorded by the F.B.I., Dies at 93 (USA)
(9 November 2016; The New York Times)
In his later years, he acquired the documented surveillance of himself via the Freedom of Information Act and turned it into another art work series.

‘Gospel of Jesus’ Wife’ Researcher Says Frenzy Distracts from Larger Issues (USA)
(10 November 2016; The Harvard Crimson)
Divinity professor Karen King urges attention to be focused on its implications for the role of women in society, despite the discrepancies in the carbon-dating results.

Lantana officer recounts bizarre art theft investigation (USA)
(10 November 2016; WPTV)
An art collector’s former lover stole approximately 200 pieces of his collection after ending their relationship. The location of the collection, stored in a warehouse, was discovered after police tracked the ex-girlfriend for days.

Proposed Bears Ears monument protects Anasazi history at risk (USA)
(11 November 2016; The Sacramento Bee)
“I was horrified to see graffiti scrawled all over the Sand Island petroglyphs, one of the most important rock art sites in the Southwest”

Austrian Authorities Thwart Group Trying to Sell Fake Picassos (Austria)
(8 November 2016; The New York Times)
Undercover agents arrest 6 suspects selling fakes for 10 million euros, each. However, it seems as if negligent due diligence must be (somehow) proved in order to convict.

Antiquities seized (Cyprus)
(9 November 2016; Cyprus Mail)
“Police issued a number of arrest warrants on Wednesday after a large number of antiquities were located in three establishments in the Limassol district.”

Paphos mayor says he feel vindicated following archaeology arrests (Cyprus)
(10 November 2016; Cyprus Mail)
Collaboration between Cyprian police, Europol, UNESCO, Interpol, and US authorities led to the raid and arrest of a man suspected of looting cultural objects from Paphos and smuggled to Limassol.

Cyprus police coordinated Europe-wide Pandora operation to hunt down missing antiquities (Cyprus)
(12 November 2016; Cyprus Mail)
“During these investigations, a total of 1383 artefacts along with 13 metal detectors were seized.”

Historic painting looted from church in Italy destroyed by earthquake (Italy)
(7 November 2016; UPI)
Amidst the damage caused by the earthquake on October 30th, Lhomme’s painting The Forgiveness of Assisi has disappeared. It is believed to be a result of opportunistic looting.

Did Michelangelo Start His Career as an Art Forger? (Italy)
(10 November 2016; ArtNet News)
Several corroborated sources suggest that Michelangelo’s success began when he was noticed by a Cardinal for creating a forged sculpture.

Slovenian busted in Austrian investigation into art forgery (Slovenia, Austria)
(7 November 2016; STA)
A Slovenian national has been caught involved with a lucrative forgery operation in Austria.

Roban dos tallas de los siglos XVI y XVIII en la iglesia de Villaldavín (Carved sculptures from the 16th and 18th centuries stolen from the church of Villaldavín; Spain)
(8 November 2016; El Norte de Castilla)
Due to the church no longer being in use, the theft went unnoticed for 3 days.

Britain is in the middle of a treasure-hunting boom (UK)
(12 November 2016; The Economist)
Despite the introduction of the Treasure Act in 1996, British treasure hunters continually fail to report findings and illegally trespass on the property of others.

Looted Constable returned by Tate heads to auction at Christie’s (UK, Hungary)
(10 November 2016; The Art Newspaper)
After making a claim that the painting was looted from their ancestors during the Nazi-era and having it handed over from the Tate, the Hatvany heirs are planning to auction the valuable piece in December at Christies.

Constable painting looted by Nazis to be sold at auction (UK, Hungary)
(12 November 2016; The Telegraph)
The Tate lost claim to the work which was looted during the German occupation of Hungary

Possible ‘first encounter’ Aboriginal shield uncovered in Berlin (Australia, Germany)
(10 November 2016; The New Daily)
During a trip to the UK to negotiate the return of an object of their cultural heritage, a group of Aboriginal representatives discover new undocumented objects in Berlin.

Gaitonde painting ‘stolen’ (India)
(7 November 2016; The Telegraph)
Nirlon Ltd shareholder noticed a painting at an exhibition in New York that looked oddly similar to the one that was supposed to be in Nirlon’s office in Worli.

Temple theft: Cops recover crown, arrest 3 (India)
(7 November 2016; The Times of India)
Both thieves and jeweller, who melted the crown, arrested for theft of mukut from Bhopal temple.

Donation boxes, ornaments stolen from temple near Lonavla (India)
(8 November 2016; The Times of India)
Police were not alerted until the following morning when the priest arrived for his early morning prayer.

Kohinoor issue: It is war crime not to return stolen items, says advocate Siddiqui (India, UK)
(11 November 2016; Biharprabha)
Advocate Siddiqui threatens to take the issue to the International Court of Justice if the items are not returned. Would he actually have legal standing to do so?

Silver artefact stolen from Karave temple (India)
(12 November 2016; The Times of India)
The 10kg silver artefact was kept behind the Ganpati idol.

Iconic Buddha in Swat valley restored after nine years when Taliban defaced it (Pakistan)
(7 November 2016; Dawn)
The elaborate restoration of the Buddha in Swat Valley is expected to draw in new tourism to an area once destroyed by the Taliban.

Notices issued on plea for retrieval of ‘Dancing Girl’ from India (Pakistan, India)
(11 November 2016; The News)
Pakistan demands the return of a statuette transferred from Mohenjodaro to New Delhi by British archaeologists in 1946. Will the 1972 UNESCO back-up the case even if it predates the 1972 Convention and India-Pakistan Partition?

Police Reclaim 4,500 Stolen Cultural Assets (South Korea)
(8 November 2016; KBS World)
After an intensive and successful investigation by police into the theft and smuggling of cultural objects, many important sacred texts have been recovered.

48 artifact smugglers caught in police probe (South Korea)
(10 November 2016; Korea JoongAng Daily)
As part of a four month investigation by the police, a network of actors in an antiquities smuggling ring has been arrested. It is claimed approximately 4,500 objects have been recovered.

Italy returns scores of smuggled artifacts to Iran (Iran, Italy)
(9 November 2016; Tehran Times)
In an appellate court in Milan, Iran was granted the repatriation of near 30 cultural objects smuggled out of the country and seized in Italy by police.

‘We’ve hidden our treasures from Isil, only a handful know the secret location’, says Syria’s antiquities chief (Syria)
(12 November 2016; The Telegraph)
“So afraid was Syria’s general director of antiquities and museums that Islamic State of Iraq and the Levant (Isil) militants would come to loot and destroy the country’s history, he sent every last piece off to a secret location.”

Prince Charles warns of cultural destruction on UAE visit (UAE, UK)
(7 November 2016; BBC News)
Note that he only brought along a digital replica of what has been dubbed the ‘Birmingham Koran’ during his visit to the UAE.

Demand for high-end honey prompts beehive crime wave (New Zealand)
(7 November 2016; Mother Nature Network)
Gwyneth Paltrow (among others) is to blame for the celebrity-endorsed popularity of manuka honey and the demand it puts on on producers in New Zealand. Theft, vandalism, and environmental damage have resulted from the intense competitiveness.