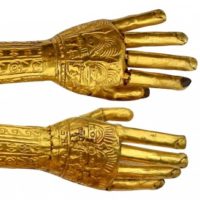 Hot this week: Looted antiquities heading back to Guatemala and India

These Four Technologies May Finally Put an End to Art Forgery
(18 July 2016; Artsy)
A summary of some of the authorship tech that is floating around the art world.

Brazil’s Museum of Stolen Beauty (Brazil)
(22 July 2016; Bloomberg)
The art on display in the Oscar Niemeyer Museum are ‘artworks in custody’ seized from Renato Duque.

First Nation to use blockades if needed to protect ancient B.C. burial site (Canada)
(18 July 2016; The Globe and Mail)
A high school was built atop a cemetery where Tsilhqot’in war Chief Ahan may have been buried

FBI returns Guatemala ancient Mayan artifacts that were in a private U.S. collection (Guatemala, USA)
(22 July 2016; Los Angeles Times)
The pieces, all from in or around El Peru-Waka, were held in a California private collection for decades and were bought from a previously-convicted dealer

Body armor stolen from Plimoth Plantation (USA)
(22 July 2016; The Enterprise)
The interpretation pieces were taken from the museum’s 1627 village

U.S. files complaint to recover Acoma war shield (USA, France)
(23 July 2016; Santa Fe New Mexican)
“U.S. attorney for New Mexico filed a complaint for forfeiture, a civil action to condemn the shield to the benefit of the U.S. The defendant in the case is the shield, more specifically “Lot #68 Bouclier de Guerre.””

Experts shed light on Modigliani’s murky market with new research project (France)
(11 July 2016; The Art Newspaper)
“Fakes and squabbles have long-obscured scholarship, but a catalogue raisonné may now be in the pipeline”

Descendants of Jewish Owners Continue to Pursue Nazi-Stolen Art (Germany)
(20 July 2016; The Jewish Voice)
Some of the background into the discovery that Bavaria returned art looted from Jews to Nazis.

First-ever legal bid for return of Elgin Marbles to Greece thrown out by European Court of Human Rights (Greece, UK)
(19 July 2016; Independent)
“Judges refuse to hear the ‘merits of the case’ saying it happened too long ago”

Damien Hirst Cleared Of Formaldehyde Gate Controversy At Tate Retrospective (UK)
(16 July 2016; Artlyst)
The “report has now been discredited by Hirst’s own report and one of the authors of the original study has now retracted his conclusion”

Lost Lucian Freud Portrait Valued at £300,000 Authenticated By BBC (UK)
(18 July 2016; Artlyst)
The TV show determined that it was a Freud, despite Freud saying that it wasn’t.

Picasso’s Weeping Woman: Could mystery of 1986 NGV art heist be solved? (Australia)
(23 July 2016; The Sydney Morning Herald)
“Mystery still surrounds one of the biggest art heists in Australian history 30 years after the event”

The man who stole Pompey’s medals (Australia)
(24 July 2016; Bombala Times)
“They had been stolen from the Australian War Memorial. Harold ‘Pompey’ Elliott’s medals have never been found.”

NGA’s stolen buddha slowly homing in on return to India (Australia, India)
(22 July 2016; The Australian)
The gallery is looking to finally hand over the looted piece when an Indian delegation is in Australia.

Australia to return stolen Buddha statue to India (Australia, India)
(22 July 2016; The Tribune)
“The second-century statue stands at 1.3-metre tall and was purchased from Asian art specialist Nancy Wiener by billionaire Ros Packer, on behalf of the NGA, in 2007”

Three cops booked for selling stolen goods (India)
(17 July 2016; The Times of India)
The cops allegedly nabbed a temple thief, confiscated the sacred items, and then sold them

मन्दिर से कीमती अष्टधातु की मूर्ति चोरी (Precious ashtadhatu idol theft from temple; India)
(17 July 2016; EENadu)
The Durga was taken off the back of a lion which was left behind.

BJP government has no space for prized artefacts returned by US (India)
(18 July 2016; India Today)
“A quandary over where to put these long-lost national treasures amid massive security concerns”

मंदिर से चोरी हुए चांदी के छत्र (Silver crown stolen from temple; India)
(19 July 2016; Patrika)
The two crowns were taken from atop the statues and the theft was discovered during cleaning.

Digitisation of temple idols all set to stop smugglers in their tracks (India)
(19 July 2016; The Times of India)
The Hindu Religious and Charitable Endowments (HR&CE) is trying to digitally record all bronze and stone idols in 38,000 temples.

Six temples burgled in one night in Maddur taluk (India)
(21 July 2016; The Times of India)
The temples were all in Maddur taluk in Mandya and ornaments made of precious metals were stolen.

‘Our contribution to the artefacts registry is poor’ (India)
(18 July 2016; The New Indian Express)
Arvind Venkataraman from the India Pride Project notes that “Any artefact can be restituted as long as it is proven that it was stolen”. The proof requires documentation.

Meet Vijay Kumar, the guardian of plundered idols and colonial loot (India)
(20 July 2016; The News Minute)
“I want to show that Indian art is no longer fair game.”

Temple priest arrested on theft charge (India)
(24 July 2016; The Hindu)
“The accused priest had pledged some of the valuables at neighbouring villages and had sold some others.”

Museums win bid to keep antiquities (Iran, USA)
(20 July 2016; Chicago Daily Law Bulletin)
An obvious outcome. To award the items to the victims would mean that the courts would have to rule that the antiquities belonged to Iran and not the US Museums. Several leaps.

Sumerian city of Lagash slowly emerging from desert sands (Iraq)
(19 July 2016; Al Monitor)
Reports of looting outside the protected area by nearby.

IS destruction too extensive to restore Temple of Bel in Syria’s Palmyra (Syria)
(23 July 2016; Reuters)
According to Russian officials. This isn’t a surprise, the whole idea of ‘restoration’ is controversial.

‘Smugglers’ fell sandalwood trees (India)
(20 July 2016; The Times of India)
The trees were felled in the Rajrappa temple area and smuggled.

India may approach Britain on bringing back Kohinoor (India, UK)
(22 July 2016; The Tribune)
This decision to approach the UK was made in a high level government meeting.

Indie Designer Takes to Twitter to Accuse Zara of Copying Her Designs (USA)
(20 July 2016; Yahoo News)
The major retailer issues designer Tuesday Bassen with a snide letter when prevented with clear evidence that they had stolen her work.