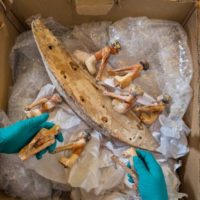 Hot this week: Political Palmyra and love for Libya.

Antiquities Trafficking and Art Crime, Free Online Course
(15 May 2016; Future Learn)
Our totally free online course starts again on 6 June! If you missed it the first time or want to go through it again, sign up. Remember that even if you can’t do the course that week, you will have access to the course materials for months and can go at your own pace.

How Tomb Raiders Are Stealing Our History
(13 May 2016; National Geographic)
If you read anything about antiquities trafficking this month, read this.

Libya’s ancient sites not exposed to same risk as in Syria, Iraq – experts (Libya)
(11 May 2016; Reuters)
I am not sure that the premise of this article is useful. Risk is different in every context.

Key Libyan and international partners unite to adopt an action plan for Libya’s heritage (Libya)
(13 May 2016; UNESCO)
It will be interesting to see exactly what the plan entails.

Así fue saqueado un cementerio indígena de Santander (Indigenous cemetery in Santander looted; Colombia)
(11 May 2016; Entorino Inteligente)
The site of El Peñón was looted before it was excavated by archaeologists.

Solapan en Kanasín saqueo arqueológico (Archaeological looting in Kanasín; Mexico)
(13 May 2016; Sipse)
Most of the looting appears to be stone taking for construction.

Two charged in Chihuly statue theft (USA)
(10 May 2016; Greenville Online)
The duo who stole the Chihuly pieces were apparently drunk and are now sorry.

The Little Pool Hidden In The Desert Has Apparently Been Destroyed (USA)
(10 May 2016; LAist)
Artist Alfredo Barseguila’s piece has been vandalized.

After theft of Lincoln’s hand, museum to get security cameras (USA)
(11 May 2016; Daily Journal)
The Kankakee County Museum has been forced to rethink their security.

Stolen mask mysteriously returned to artist (USA)
(12 May 2016; KTOO)
Artist Sheila Dyer has her stolen mask back, along with a note.

Accused Knoedler Forgery Mastermind Gets Postponement for Extradition From Spain (USA, Spain)
(13 May 2016; ArtNet News)
Spain has approved a medical exemption for José Carlos Bergantiños Díaz who is allegedly part of the forgery scheme.

Man buys stolen World War I cannon without knowing (USA)
(14 May 2016; Pulse)
The cannon was stolen from a California veterans hall.

Burying Bones of Contention: Native Americans Close to Getting Ancestral Skeleton Back (USA)
(12 May 2016; Scientific American)
Now that Kennewick Man has been declared Native America, who exactly can request his return?

Attorney works to reclaim art stolen from Jews by Nazis (USA)
(10 May 2016; Star Tribune)
A feature on attorney Don Burris.

Guelph Treasure Heirs Explain Why Case Belongs in U.S. Court (USA, Germany)
(13 May 2016; JD Supra)
Attorney responds to “the motion to dismiss my clients’ claims over the 1935 forced sale of the Guelph Treasure”.

Obama signs into law new restrictions on Syrian antiquities (USA, Syria)
(9 May 2016; Stars and Stripes)
What ever criticism may exist about the effectiveness of this law, it is at least a symbolic gesture against the illicit trade.

Syrian Antiquities Import Restrictions Are Law, But Will They Work? (USA, Syria)
(10 May 2016; Live Science)
One of the criticisms of the law’s potential effectiveness.

France returns Nazi-stolen Degas drawing to rightful owners (France)
(9 May 2016; CBC News)
“Viviane Dreyfus accepted the drawing for her father Maurice, who died in 1957 without ever speaking of the lost work.”

Greece looks to international justice to regain Parthenon marbles from UK (Greece, UK)
(8 May 2016; The Guardian)
“Greek culture minister says government will appeal to courts and the likes of UN”

Ancient Egyptian statue of Sekhemka disappears into private collection in ‘moral crime against world heritage’ (UK)
(9 May 2016; The Independent)
Sekhemka has been lost; public to private hands.

Antique dealer who plundered churches for profit jailed (UK)
(10 May 2016; The Guardian)
A historic conviction, first of its kind where this particular piece of UK legislation was used.

La Bella Principessa: Still and Enigma (UK)
(15 May 2016; The Art Newspaper)
A Leonardo or a forgery by Shaun Grennhalgh?

Ancient seal dated back to X century returns to Ukraine (Ukraine)
(11 May 2016; Ukraine Today)
The piece is said to have belonged to Prince Svyatoslav; it was found in 1982, disappeared, and has now been returned with no details released.

Ukraine recovers 17 paintings stolen from Verona museum (Ukraine, Italy)
(12 May 2016; Reuters)
The pieces were found within two km of the Moldova border and were taken from the Castelvecchio museum last year.

Estonia hands over stolen Viking-era sword to Ukraine (photos) (Ukraine, Estonia, Russia, Belarus)
(14 May 2016; Ukraine Today)
An Estonian customs official found the sword at the Estonia/Russia border in a car being driven by a Belerusian.

Maori skull returning to homeland after 133 years in Moray (New Zealand, UK)
(11 May 2016; STV)
Part of the large group return; this one from the Falconer Museum.

60 Maori and Moriori heads and skulls repatriated from UK and US (New Zealand, UK, USA)
(12 May 2016; The New Zealand Herald)
The heads will be welcomes to the Te Papa marae on 27 May.

Tomb raiders: Far from the glamour of Lara Croft and Indiana Jones, these are thieves with a history of being difficult to legislate against (Hong Kong)
(9 May 2016; South China Morning Post)
Grave robbing of recent graves in Hong Kong and thoughts about preventing the historic practice

Govt exploring ways to resolve Kohinoor issue with UK: Sharma (India, UK)
(9 May 2016; Business Standard)
But what exactly is a “satisfactory solution”?

UT departments told to prepare inventory of heritage furniture (India)
(10 May 2016; The Tribune)
This is following unauthorised sale and thefts of Le Corbusier items.

Ancient Brahmayani statues stolen from Bhaktapur temple (Nepal)
(11 May 2016; The Himalayan Times)
“Police said it became easier for the thieves to lift the statues from the temple as local people living around the temple had migrated elsewhere following the 2015 earthquake.”

Thefts of idols on rise in Bhaktapur (Nepal)
(12 May 2016; The Himalayan Times)
Reflecting on recent thefts from this ancient city, part of a UNESCO World Heritage Site

Russia and Syria Use Palmyra as a Stage for Political Theater (Syria, Russia)
(13 May 2016; Hyperallergic)
One could argue that everyone is using Palmyra for theatre at this point.

Egypt ‘suppressing truth’ over hidden chambers in Tutankhamun’s tomb (Egypt)
(12 May 2016; The Guardian)
National Geographic scans indicate there is nothing behind the wall. Are Egyptian Officials withholding this evidence?

Japanese vagina kayak artist found guilty of obscenity (Japan)
(9 May 2016; The Guardian)
“Megumi Igarashi fined after distributing data that would allow 3D printing of her genitals in order to raise funds for boat”

Life-sized zebra sculpture ‘stolen’ in Southampton (UK)
(11 May 2016; BBC News)
Gilbert, the painted zebra, has been stolen from a wildlife charity.