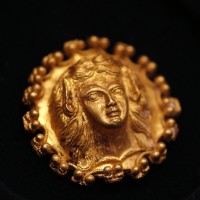 Hot this week: Advancing on Palmyra

The Hare with Amber Eyes: A Hidden Inheritance by Edmund de Waal
(27 March 2016)
Tiny Japanese sculptures are silent witness to an art florescence then catastrophe for Jewish families under Nazism.

Artistic censorship is on the rise, advocacy group reports
(24 March 2016; The Art Newspaper)
According to a report issued by the organization Freemuse, based in Copenhagen.

Stolen ancient Egyptian statue on its way back from Belgium (Egypt, Belgium)
(22 March 2016; Ahram Online)
The piece was discovered for sale at a Belgian auction house in 2014.

Mali rebel ‘to admit’ Timbuktu mausoleum destruction at ICC (Mali)
(24 March 2016; BBC News)
This could be a major turning point. Some real teeth against cultural destruction? Won’t act as a deterrent, but still.

Benin royals applaud Cambridge move on “Okukor” (Nigeria, UK)
(21 March 2016; Vanguard)
Hoping for the possibility of the return of the looted artefact.

Cary arts group rethinks security measures after paintings stolen (USA)
(20 March 2016; WRAL)
The artists who were displaying their work in the medical building assumed there would be security cameras.

Placer County Indian artifacts being returned to tribes (USA)
(20 March 2016; Auburn Journal)
The Placer County Museums will be returning objects to the Paiute.

Crooked antiques dealer dodges prison for smuggled $1M statue (USA, Pakistan)
(24 March 2016; The Daily Chappaqua)
A $5000 fine and thus a pathetic slap on the wrist. Less than ‘the price of doing business’. This is how white collar criminals keep committing crime.

Museums and public galleries in Brussels in lockdown in wake of terrorist attacks (Belgium)
(22 March 2016; The Art Newspaper)
Not because of specific threat, but general.

Paris art handlers testify to taking ‘€220,000 in a plastic bag’ among other revelations (France)
(25 March 2016; The Art Newspaper)
With the first day of testimony, many criminal reveals.

Mystery over missing painting in Limerick (Ireland)
(22 March 2016; Limerick Leader)
Achilles Admiring, is by the late Dublin artist Stella Steyn was taken while it was being moved.

Stolen artefacts stashed by British art dealer are returned to Italy (Italy, UK)
(22 March 2016; The Guardian)
The Symes loot recently uncovered in Geneva have now gone back to Italy.

Smears, counterclaims and lawsuits—the tangled web surrounding Prince of Liechtenstein’s Cranach (Liechtenstein, France)
(24 March 2016; The Art Newspaper)
The piece, as it turns out, is the subject of an ongoing lawsuit. Fake? Who knows.

UK teens face theft charges in Poland over Auschwitz items (Poland, UK)
(21 March 2016; The Times of Israel)
Poland will not drop the case.

Rare advertising boards stolen from museum in Ramsey (UK)
(22 March 2016; The Hunts Post)
“The set of 12 boards…have been displayed on the exterior walls of the museum for more than 30 years”

Trio of rare Viking artefacts reported stolen from church at Sockburn, near Darlington (UK)
(23 March 2016; The Northern Echo)
The artefacts, deposited in All Saints Church, in Sockburn, could have been stolen as far back as Sept 2015.

Bins set alight inside ancient Wemyss cave (UK)
(23 March 2016; Fife Today)
There is considerable smoke damage but the more important rock art isn’t in that part of the cave.

Chinese man arrested on suspicion of planning to sell ancient artefacts he found in tomb buried in backyard (China)
(25 March 2016; South China Morning Post)
The man found the tomb below ground behind his home in Tongchuan, Shaanxi province .

Market for Chinese Art Is Increasingly in China (China)
(25 March 2016; The New York Times)
The market isn’t where we imagine it to be. China is buying China…and the rest of Asia.

Protector left unprotected (India)
(21 March 2016; The Hindu)
“Smugglers have robbed nearly 200 historical temples and monuments of their antiques in the last 15 years.”

7 kalasams stolen from temple in Pallavaram (India)
(22 March 2016; The Times of India)
The next morning the priest found the temple grille broke and the brass pieces missing. They had tried to break open the hundi.

Lighten the bureaucracy so India’s heritage can flourish (India)
(24 March 2016; The Art Newspaper)
Yes, India’s antiquities laws need an overhaul but beware reform that is actually deregulation to let the market do whatever it wants. This is not what will solve India’s problems.

Man nabbed with stolen bronze idol in Tasmac shop (India)
(27 March 2016; The Times of India)
The man stole the piece, sold it, found out he should get a higher price, got it back, and then was arrested while celebrating his windfall.

Real artifacts stolen, replaced with fake ones at Peshawar museum (Pakistan)
(26 March 2016; Dunya News)
“This incident was brought to light by the investigative team of the Provincial Anti-corruption department”

Restoring Syria’s pearl of the desert: a reason for optimism amid the storm of terror (Syria)
(26 March 2016; The Guardian)
Thoughts from Professor Maamoun Abdelkarim, Director of Syria’s antiquities and museums directorate.

World’s most expensive plate seized in Turkey (Turkey)
(22 March 2016; Hurriyet Daily News)
Seized during an operation by the Balıkesir Provincial gendarmerie, one of 105 artifacts recovered at that time.

Yemeni authorities jail Jewish man over airlifted Torah (Yemen, Israel)
(24 March 2016; The Jewish Chronicle)
Not the first case of this type. This can only be contentious.

Lawyer arrested for stealing books from Hyderabad HC (India)
(21 March 2016; The Times of India)
“He had been stealing law books, journals and citations from the court halls to establish a good looking office to impress clients”

‘I don’t think it was taken by an art collector’ (New Zealand)
(25 March 2016; Radio New Zealand)
“A sign mocking American presidential candidate Donald Trump has been stolen from outside an Auckland Church.”

The Artist Who Moved a Detroit House to Europe Left a Mess Behind (USA, Netherlands)
(25 March 2016; Hyperallergic)
“Last month, Berlin-based Ryan Mendoza pissed off a lot of people when he tore down an abandoned house in Detroit and shipped the structure off for display at this year’s Art Rotterdam.”

Flying saucer stolen in Roswell (really) (USA)
(22 March 2016; Albuquerque Journal)
The saucer was *abducted* from outside the UFO museum.