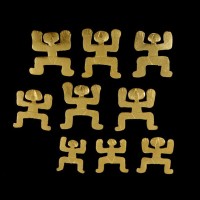 Fallen Glory: The Lives and Deaths of Twenty Lost Buildings from the Tower of Babel to the Twin Towers by James Crawford
(3 January 2016)
After a year of massive heritage destruction, this reflection on the ‘death’ of 20 important buildings almost gives one hope.

These Four Assumptions Are Perpetuating the Sale of Nazi-Looted Art
(31 December 2015; Artsy)
Art buyers: education yourself. You might not be as good a ‘good faith’ buyer as you think.

Five Legal Cases Changing the Art Market as We Know It (USA)
(23 December 2015; Artsy)
These really are the cases to watch.

Latest search for Gardner paintings came up empty (USA)
(28 December 2015; The Boston Globe)
The paintings were not stowed at a racetrack.

Plea deal calls for probation, apology in theft of remains (USA)
(30 December 2015; Chron)
I suspect this, from a former National Park Service official, will seem like a slap on the wrist.

Cyprus seeks Lebanese expertise on seized treasures (Cyprus, Lebanon)
(28 December 2015; Ya Libnan)
Because the objects seized from the Odyssey Marine boat in Cyprus may have come from Lebanon, an expert has been called in.

British Teens Indicted for Stealing Artifacts From Auschwutz-Birkenau Museum (Poland, UK)
(30 December 2015; Haaretz)
The 17-year-olds are essentially claiming that lack of knowledge about the law is an excuse to break it.

ISIS claims responsibility for attack on tourists at ancient fortress in Russia’s Dagestan (Russia)
(31 December 2015; RT)
But the connection is unconfirmed as of yet.

‘Lost’ £30m masterpiece now at risk of leaving UK (UK)
(23 December 2015; gov.uk)
An appeal to keep Pontormo’s Portrait of a Young Man in a Red Cap now that a hold has been place on its export.

‘Nighthawks’: Tracking the criminals plundering ancient sites with the latest equipment (UK)
(30 December 2015; The Independent)
In light of pop TV shows, it is worth reminding everyone that this is destructive and harms the past.

Thief stole painting from St Mary’s Church in Beverley during wedding (UK)
(1 January 2016; Hull Daily Mail)
The man, who was homeless, had been staying on church grounds for a while.

Search is on for Sussex’s missing public art (UK)
(29 December 2015; The Argus)
Regional focus after the Historic England initiative to find out what happened to missing sculptures.

£21,000 of war medals stolen in museum raid remain missing three years on (UK)
(30 December 2015; The Argus)
They were taken from the Redoubt Fortress and Military Museum in Eastbourne

Vandals knock over Lyall Bay’s Easter Island statue (New Zealand, Chile)
(31 December 2015; The Dominion Post)
Not a real one, but it was a gift from the government of Chile. I absolutely went to see it knocked over.

Four precious idols stolen in Bihar (India)
(2 January 2016; The Hindu)
The idols of Ram, Janaki, Hanuman and Lakshman were taken from a temple in Bihar’s Vaishali district.

Three idols stolen from Bhilwara temples (India)
(2 January 2016; The Times of India)
Two from one, one from another, with significant community outcry

Pillage of prehistory (Pakistan)
(3 January 2016; The Express Tribune)
A worthwhile read about looting of Gandhara artefacts in the Peshwar Valley.

Jackie Chan donates replicas of 12 zodiac antiquities to a museum in Taiwan (Taiwan)
(30 December 2015; ECNS)
The originals were stolen from the Old Summer Palace in the 1800s

Two charged after museum protest (Taiwan)
(1 January 2016; Taipei Times)
They defended the vandalism of the replicas as a protest against China.

6,500 Smuggled Artefacts Are Back to Syria (Syria)
(28 December 2015; Sputnik News)
An interview with Dr Ma’moun Abdel-Kareem, head of the Directorate-General for Antiquities and Museums in Syria.

Art Basel Stabber Pleads Not Guilty To First Degree Attempted Murder (USA)
(29 December 2015; Observer)
The 24-year-old graduate student apparently did not know the woman she attacked at the art fair.