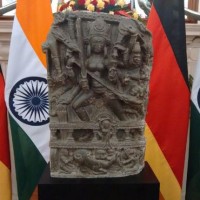 Ivory Vikings: The Mystery of the Most Famous Chessmen in the World and the Woman Who Made Them by Nancy Marie Brown
(9 October; Reviewed by Donna Yates)
A new theory about the origin of the enigmatic and contested Lewis Chessmen. My copy of the book visited the Lewis Chessmen during the review!

Is looting-to-order “just a myth”? Open-Source analysis of the theft-to-order of cultural property by Samuel Andrew Hardy
(7 October, Reviewed by Donna Yates)
An open access journal paper which offers a clear and important definition of ‘looting to order’ as it applies to the theft of cultural property

Why war crimes charges now extend to the destruction of ancient monuments
(9 October 2015; Reuters)
With the ICC charges against militants accused of destroying heritage at Timbuktu, the idea of heritage destruction as a war crime.

Egypt to prevent sale of stolen antiquities in London (Egypt)
(5 October 2015; Ahram Online)
The islamic documents and artefacts were stolen and smuggled after the 2011 Revolution. No word of Sotheby’s response.

Forever 21 Is Being Accused Of Stealing An Artist’s Design For A Crop Top (USA)
(29 September 2015; BuzzFeed)
Another case of rampant design theft by the fast fashion industry.

Audit Shows Possible Threat To Museum Artifacts (USA)
(5 October 2015; News Channel 5)
Following a major theft of funds from an employee, an audit of the Tennessee State Museum shows that artefacts are under threat of damage

U.S. Supreme Court denies appeal seeking return of Jim Thorpe’s remains (USA)
(5 October 2015; The Daily Mail)
A lower court ruled that the Borough of Jim Thorpe, PA, is a museum under NAGPRA and thus the Sac and Fox Nation could request the return of the athlete’s remains. A federal appeals court said no.

1940, ‘New Deal’ Government Painting Shows Up at Oakland Auction (USA)
(5 October 2015; NBC Bay Area)
The stolen painting is property of the US Government and was found for sale at an auction house with a covered WPA label on it.

American Indian items stolen from Liberty Pike residence (USA)
(6 October 2015; Times-Gazette)
Of course I wonder about the legal status of the antiquities but one crime at a time.

You Can’t Sell What’s Not Yours (USA)
(7 October 2015; Inside Higher Ed)
Andover Newton Theological School says that it was advised incorrectly about the collection of Native American items in the past: “It was always our intention to adhere to the law”.

A new look at Bührle art collection’s shadowy past (Switzerland)
(9 October 2015; Swiss Info)
Has Switzerland done enough to ensure that the Bührle is free of Nazi Loot?

Action group says DCMS lobbied it to fundraise for Sekhemka (UK)
(7 October 2015; Museums Journal)
“It would be like raising money to buy stolen goods.” It seems DCMS wanted the Save Sekhemka Action Group to fundraise to BUY Sekhemka. DCMS denies this.

Sikh temple ransacked with cash and gold artefacts stolen (UK)
(8 October 2015; Crawley News)
“More than £2,500 was stolen along with gold ornaments and other items” from the Sikh temple in Crawley.

Two arrested over death of Italian man found in London canal (UK)
(8 October 2015; The Guardian)
The police don’t think the murder of Sebastiano Magnanini has anything to do with his past as an art thief.

Sophisticated gangs using drones to target church roofs for their lead (UK)
(9 October 2015; The Independent)
There is a resurgence of lead theft from UK churches.

Mystery of monks missing gravestone is finally solved (UK)
(9 October 2015; Chad)
The 14th century tombstone of Robert de Markham disappeared from Rufford Abby in the 1950s and has now turned up again!

Both sides claim victories in art court battle (New Zealand)
(8 October 2015; The New Zealand Herald)
The artist Stephen Bambury claims that his former agent sold works without telling him and kept the money.

Big Brother Is Bugging Ai Weiwei (China)
(5 October 2015; Hyperallergic)
Less of an art crime, more of a crime against an artist. Ai says the bugs are a “professional job”

Amazing journey: how China hid palace artefacts from Japanese invaders (China, Japan)
(9 October 2015; South China Morning Post)
An article about the actions of museum workers to hide collections during the 1920s to the 1940s.

Senior citizen lured with ancient coins, conned of 2 lakh (India)
(5 October 2015; The Times of India)
The too-good to be true sale was: the man was conned into buying what would be illegal ancient gold coins. They were fakes.

Chandigarh Architect’s Artefacts Fetch Millions Abroad (India)
(6 October 2015; Deccan Herald)
Objects associated with the modernist architect are in high demand, but are they being stolen or neglected in Chandigarh?

Kerala Forest Department Seizes Sandal Idols Worth Rs 1.5 Crore (the wood is rare and protected.; India)
(6 October 2015; The New Indian Express)
The issue here is the illegal use of sandalwood to construct the idols

Germany returns idol stolen from Kashmir (India)
(6 October 2015; The Hindu)
“Stolen from a temple at Pulwama in Kashmir in the 1990s”, sold by Subhash Kapoor.

Archaeologists to excavate Pachaumi village in November (some of those discovered idols were later stolen.; India)
(7 October 2015; The Times of India)
This comes after a series of idol discoveries by villagers

चोरों का फिर जैन मंदिर पर धावा (Jain temple raided by thieves again; India)
(8 October 2015; Rajasthan Patrika)
A silver statue of Lord Adinath was stolen from the Jain temple in the Padwa Sagvadha area of Dungarpur, one of several thefts from area temples in the past few days.

Special force soon to secure ‘cultural assets’ (India)
(9 October 2015; The Times of India)
Due to thefts and other security issue, guard strength is being increased at cultural sites.

He brings the gods back home to India (India)
(9 October 2015; Rediff News)
A profile of provenance and artefact repatriation researcher Vijay Kumar.

Thieves strike Jain temple, flee with four idols (India)
(11 October 2015; Nyoooz)
The idols were stolen from Parshavnath Digambar Jain temple, Aurangabad. The temple has been robbed of idols twice before this year.

Palmyra: Islamic State’s demolition in the desert (Syria)
(5 October 2015; BBC News)
This article is a collection of satellite images of destruction.

Ancient tombs in Fethiye cleaned after controversy (Turkey)
(5 October 2015; Hurriyet Daily News)
It has been found that locals are dumping rubbish in the famous Amintas tombs.

A Terra-cotta Antiquity that Arrived at a Turkish Museum by Mail (Turkey)
(6 October 2015; Hyperallergic)
This is the same piece that was reported on before but it is worth saying that “just give the loot back” is a lovely option.

Study: Collectors plundering cactuses to extinction (USA)
(5 October 2015; ASU News)
A must read for those of us interested in the destructive collecting of the rare

Renoir haters picket outside Museum of Fine Arts (USA)
(5 October 2015; The Boston Globe)
Put some fingers on those hands! Give us work by Paul Gauguin!”