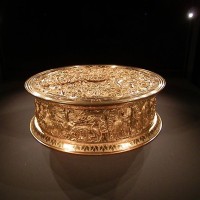 This book completely changed how I view the restitution of Nazi-looted art.

The Orpheus Clock: The Search for My Family’s Art Treasures Stolen by the Nazis
by Simon Goodman
2015, Scribner 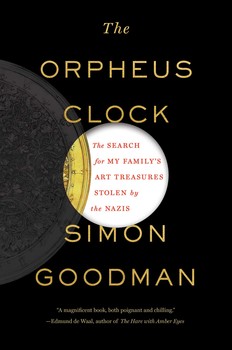 I enjoyed reading The Orpheus Clock. More than that, it changed how I view the topic of Nazi-loot restitution. That in itself made the book worthwhile. Let me explain.

There is a serious amount of press focused on issues related to Nazi-era forced art sales from Jewish owners during the 1930s and 1940s. There is a general art market fear of the possibility of Nazi-looted art and whole provenance departments have grown up in museums, auction houses, law firms, etc to deal with the possibility that there might be a claim from heirs to any bit of art. As someone who works in difficult regions which have seen their own share of looting and genocide, somewhere within myself I’ve always wondered “Why is THAT genocide the only genocide that gets any play when it comes to the return of stolen culture?” As well as “Why do the heirs sell the art so quickly?” I now realise both questions are unsophisticated and even a bit naive. Injustices shouldn’t be ranked and compared. Justice is much more important than objects.

I’m probably a bit ahead of myself. Let me tell you about the book.

The Orpheus Clock is written by Simon Goodman, one of two living heirs to the Fritz and Louise Gutmann collection (Netherlands) and the main family representative for the Eugen Gutmann collection (Germany). Simon’s father Bernard, the son of Fritz and Louise, was a British citizen by a small trick of fate and was attending University in the UK when things fell apart in the Netherlands. Fritz and Louise, of a branch of the Gutmann family that hadn’t even been Jewish since the 1890s, were murdered in the Holocaust and their assets were stripped bare. Money, home, and of course their absolutely massive art collection. Bosch, Renoir, Botticelli gone. Silver and china, everything. Thousands of pieces. After the war, Bernard was left with nothing but a drive to recoup the material things stolen from his parents. Nothing could bring his parents back, but it seems he had hope of recovering the art that they loved.

Interestingly, Goodman knew almost nothing about his father’s quest for the restitution of the family’s stolen art. It wasn’t until Bernard died that Goodman realised both the sheer size of the Gutmann collection and the magnitude of the injustice committed against his and other Jewish (and Jewish-ish) families in Nazi held territories. His father was never able to secure the return of stolen Gutmann property. Simon resolved to keep trying.

Thus the Orpheus Clock is part an art-focused history of a tremendously influential German banking family, their rise and their forced fall, and part the story of Simon’s personal quest to seek justice for his father, his grandparents, and himself. His razor-sharp focus on the family story provides just enough detail to draw you in to the saga as it moves forward. World events occur, but they occur to the Gutmanns. He uses first names for his family members, even those he never was able to meet, and this strikes me as remarkably tender. I was devastated when Fritz and Louise were killed and I wanted Goodman to succeed at recovering their collection.

One issue that Goodman highlights particularly well is the ‘legal’ way that the Nazis and their art market cronies acquired Jewish art and the tangle that this has left for provenance scholars and heirs. For some reason I always imagine some jack boots kicking down the door and art being ripped off the walls as everyone cries. In other words: clear theft. No, the Nazi art folks were way too savvy for that. They wrapped everything in a cloud of seemingly legal title transfer. Art wasn’t stolen, no, it was seized to pay trumped up debt or tax, or sold to the state to secure travel documents so you could, you know, not get killed, or any number of other twists and turns. Jews were ‘paid’ for the art…under valued, into Nazi held accounts. This is where we get to the phenomenon of ‘forced sales’ and the likes. But a forced sale still very much looks like a sale on paper and to separate it out from a legitimate sale is a whole sea of mess. The Nazi need to make art seizure ‘legal’ is of particular salience to the Gutmann family story. Fritz Gutmann was beaten to death in a Nazi prison for refusing to sign over the family silver. Louise Gutmann was shipped to Auschwitz right after. The Nazis never gained title to the silver.

I want you all to read the book so I am not going to detail Goodman’s restitution saga. You’ll have to find out what happens on your own. I did find his comments about auction houses very interesting, however. Basically when Goodman wanted information from various high end auction houses that would help him recover his family’s stolen art, they treated him HORRIBLY. One incident with Sotheby’s in particularly nearly made me toss my pint of beer on the floor in frustration. (I read at the pub.) However, the moment that Goodman and his family have museum quality masterpieces to sell, masterpieces with totally clean and clear provenance no less, the auction houses fall over themselves to suck up. Real classy, auction houses. Goodman himself says that the auction houses cared about authenticity but couldn’t give a flip about provenance. Yep.

But let me come back to my two questions above.

“Why is THAT genocide the only genocide that gets any play when it comes to the return of stolen culture?”
The scale of cultural property lost in Europe during the Second World War was massive. I don’t even think I appreciate it now, but I do appropriate it. Some of the people who experienced it directly are still alive and, especially post war, the actions of a number of states to impede return of these objects were downright criminal. To focus on WWII restitution is not to NOT focus on justice for other cultural injustices and to try to rank injustice is just absurd. I am slightly ashamed at ever having that thought.

“Why do the heirs sell the art so quickly?”
I absolutely understand why families like the Goodmans sell the art that they have recovered. The most obvious reason is that there are a lot of heirs and usually only one painting. Selling and splitting the proceeds is usually the only fair solution to that issue and this is the same for any estate when someone dies. Next, this crap takes money. In only very rare cases do museums or collectors calmly hand over their Nazi-loot; usually it only happens after a lawsuit. Lawyers cost money and, interestingly enough, because of the Holocaust many of these families are no longer fabulously wealthy. They need to pay back the cost of recovering the painting with the painting. Finally, and this is the one that really just sunk in to me for the first time, it isn’t about the art at all. It is about the injustice.

Fritz and Louise Gutmann were murdered and all of their possessions were taken from their family: possessions that they absolutely without a doubt expected to pass on to their children. In the Orpheus Clock we join Bernard as he desperately writes to everyone on the continent who might have information about the whereabouts of his parents. We are with him when he discovers they have been murdered. We follow him to the Netherlands where he finds his family home stripped bare and seized by the Dutch state, then to France and Germany where he seeks information about his parents’ death. Finally we see him try to recover the last remaining shards of his parents’ life, the physical manifestation of their memory, only to be stopped at every turn by post-war Dutch and German authorities who would rather just forget this ever happened and were probably still entirely anti-Semitic. Then we meet his son who discovers his father’s failed quest for justice in an old box.

Getting the art back, even if it is sold or donated the next day, is a symbolic victory against the machine that ground these people under for 70 years. Against the cold, callous art market which is focused on profit over culture and history. It is not letting evil win. I really see it as important now. Well done, Simon Goodman.