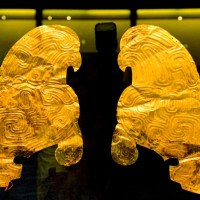 Hot this week: France returns gold to China and no one quite knows how to react.

Egyptian authorities seize guns, drugs and stolen art in operation targeting illicit goods (Egypt)
(13 July 2015; Interpol)
As part of a 50 day operation, Egyptian authorities working at the port of Diametta seized many illicit items including 135 artefacts that were listed as ‘wooden furniture’.

Dr. Morris Confirms That Myles Damaged Uxbenka (Belize)
(24 July 2015; 7 News Belize)
A Creole man has damaged the archaeological site of Uxbenka for road access to a house he constructed. The local Maya detained him and he has now been formally arrested, as have the Maya who detained him.

Iglesia de Huari reporta un robo de magnitud (Bolivia)
(25 July 2015; Los Tiempos)
A devastating loss just before a festival. Unclear exactly how much colonial silver is gone but most of the saints were stripped.

Chapel Island First Nation celebrates return of historic altar (Canada)
(20 July 2015; CBC)
The altar, returned “to the most sacred site for the Mi’kmaq, Chapel Island”, wasn’t stolen rather it was moved to a different church in a temporary arrangement in 1860 and repeated requests for return failed until now.

Mobster Tied To Boston Art Heist Assails FBI Tactics (USA)
(22 July 2015; Hartford Courant)
A man accused of being involved in the Gardner Museum heist claims in a court filing that the FBI used informants to get him to commit crimes so that they could threaten him with imprisonment if he didn’t talk about art theft.

Statute of Limitations Issues in Looted-Art Cases (USA)
(22 July 2015; The Legal Intelligencer)
FYI to everyone who spouts ‘good faith’: “In the United States, there is a general rule that no one can acquire good title from a thief”, however a claim may be barred by a statue of limitations.

Accused of thefts from History Museum, former volunteer shifts blame (USA)
(23 July 2015; Buffalo News)
Documents went missing from the A. Conger Goodyear collection and a volunteer is accused of stealing them and trying to sell them. He is basically saying that security was lax and records so bad that the museum can’t prove the documents aren’t his.

Ex-mayor of Pennsylvania’s capital charged with corruption (USA)
(24 July 2015; Sentinel Republic)
The Harrisburg mayor allegedly rerouted public funds to buy thousands of antiquities which he kept in his own private rooms. He claimed he was going to open a “Wild West museum”.

Bronze bust of ‘Faust’ writer Goethe stolen from Rochester park (USA)
(24 July 2015; Syracuse.com)
The piece was sculpted for the 200th anniversary of the author’s birth and unveiled in 1950.

Carson man pleads guilty in case of stolen antiques (USA)
(24 July 2015; The Taos News)
The man stole antiquities and other objects from a residence and the owner later recognised them for sale. 250 stolen objects were recovered during the subsequent raids.

Bangs Hallet House robbery in Yarmouth remains unsolved (USA)
(24 July 2015; Wicked Local)
The house museum was violently robbed 27 years ago of $100k in artefacts and the case has not been solved.

Artists accuse local gallery of stealing their work (USA)
(25 July 2015; KCTV)
The Kansas City gallery is accused of having artists’ work duplicated without their permission and selling the fakes, sans signature, online.

Stolen painting found after 19 years (Czech Republic)
(22 July 2015; Prague Post)
Bathing, by Jan Preisler, was stolen in 1996 from Galerie Hlinsko, Central Bohemia while on loan from The National Gallery. Police heard it was for sale and seized it. No other details.

Two stolen artworks by Goya and Rubens returned to Voergaard Castle (Denmark)
(24 July 2015; Art Media Agency)
Portrait of Marie de Médici by Rubens and The Madmand by Goya were stolen from the castle in 2008. The works ‘reappeared’ a month ago but no further info is offered.

Artwork, arson and insurance fraud have Sotheby’s in a bind (Netherlands)
(20 July 2015; NL Times)
Allegations that over insured paintings that were destroyed in a fire in 1987 were part of insurance fraud. Sotheby’s now owns the gallery that the burnt paintings were in.

Super-rich art collectors settle bitter dispute with dealer they treated ‘like a son’ (UK)
(20 July 2015; The Telegraph)
Eskandar and Fatima Maleki claimed that art dealer Amir Shariat made profits from their art collection that he did not disclose and they did not consent to.

Heartwarming honesty of car boot punter sees stolen medieval brass returned to Lincolnshire church (UK)
(22 July 2015; East Lindsey Target)
The mediaeval brass lion lectern feet were stolen from All Saint’s Church in Croft in 2008. A man bought them at a car boot sale, realised what they were, and returned them.

Disgusted residents hope ancient DEATH CURSE will ‘scare the s**t’ out of neds who sprayed a penis and a swastika on a church (UK)
(24 July 2015; Daily Record)
Absurd headline aside, the 12th century Kinnneil Kirk near Bo’ness, Scotland, has been damaged by large spray painted graffiti.

Cufflinks made from Bluebird car and worth £3,500 stolen from Beaulieu (UK)
(24 July 2015; Southern Daily Echo)
They were taken by two men caught on CCTV from a display cabinet in the gift shop at the National Motor Museum.

Man admits swapping classic Chinese artworks for fakes he painted himself (China)
(21 July 2015; The Guardian)
The former chief librarian of Guanghzou Academy of Fine Arts has admitted to taking 143 works, replacing them with his own fakes, and selling the real ones at auction for over £3.5m. He also claims everyone is doing it.

Curator Theft Raises Museum Alarms (China)
(23 July 2015; CRIEnglish)
With the revelation of massive theft by a librarian at the Guangzhou Academy of Fine Art, China needs to take a hard look at it’s heritage institutional culture. Also auction houses need to do a better job (of course).

Police recovers statues worth Rs 5 cr in UP (India)
(23 July 2015; Press Trust of India)
The statues, one of Lord Rama, one of Lord Krishna and three others, were stolen from Naval Kishore temple in Ayodhya last month and were recovered by the police. An arrest was made.

The Ultimate Temple Raider?: Inside an Antiquities-Smuggling Operation (India)
(23 July 2015; The New York Times)
A must read on the Subhash Kapoor case.

Key witness’ age spurs cops to speed up 1994 Tataguni case (India)
(24 July 2015; Bangalore Mirror)
The art heist, from the estate of painter Svetoslav Roerich and his actress wife Devika Rani, happened in 1997. After 115 court adjournments there are concerns that the key witness, now 94 years old, won’t make it.

500-yr-old idols stolen from Jain temple in Kanker, 4 recovered (India)
(25 July 2015; Times of India)
Three idols and two prayer plates thought to be about 500 years old were stolen from Jain Temple, Rajpara, in Kanker District of Chhattisgarh. All but one idol has been recovered.

Idol stolen from Jain temple in Madhya Pradesh (India)
(26 July 2015; Niti Central)
Thieves took one of 10 idols from a Jain temple at Siddhawarkoot near Omkreshwar town.

Ancient coins missing from Lucknow museum (India)
(26 July 2015; The Asian Age)
Alleging a coverup, the article claims that following an inventory of the coin collection, many were found to be fake and others missing.

Thieves strike at three places, including temple (India)
(26 July 2015; The Hindu)
They stole a silver trident and a bell from Maramma temple at Nayasinganahalli.

Honour etched in stone (India)
(26 July 2015; The Statesman)
On the theft and recovery of stolen Indian sacred art.

Protecting the ruins (Nepal)
(24 July 2015; Nepali Times)
Reflecting on sacred art protection after the Nepal earthquake. Quotes from me!

Stolen Buddhist painting returned from U.S. (South Korea)
(21 July 2015; The Korea Observer)
An American initially offered the 18th century piece at auction but it belongs to the Buddhist order of Jogye. The American voluntarily returned it.

Post Box public sculpture latest to be stolen in Tehran (Iran)
(24 July 2015; Radio Zamaneh)
Ebrahim Eskandari was commissioned to make the bronze piece in 2008. Apparently the hands were cut off first last year, than the whole piece was stolen.

US Returns Looted Artifacts to Iraq—But Are Some Fakes? (Iraq)
(17 July 2015; Observer)
Yes some are fakes (but no, not all). Any I should watch what I say on Twitter, apparently, as I’m being quoted here!

Ohio university grapples with case of missing mosaic (Turkey)
(19 July 2015; Al Jazeera)
Everyone knows these mosaics were stolen from Zeugma, Turkey. Why aren’t they being returned?

‘Chinese student held in Iraq not IS linked’ (Iraq)
(20 July 2015; Business Standard)
The archaeology student from Peking University says he was on an archaeological tour and was allegedly picked up while poking around threatened archaeological sites. Dear students: please don’t be this stupid.