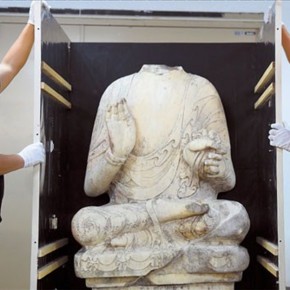 300 photos of Kathmandu and Bhaktapur pre-earthquake (Dec 2014)
(6 May 2015; Stolen Gods)
I’ve released these photos of mine under a creative commons license in hope someone can put them to good use.

Colombia police recover Garcia Marquez first edition
(9 May 2015; BBC News)
The book was taken from a locked cabinet at the International Book Fair in Bogota and was found later at a used book stall.

Cometen en Yucatán un robo para Ripley
(4 May 2015; Sispe)
Three old bells were stolen from the church of San Cristóbal in the village of Holcá, Yucatán.

AG: Mineral museum collection not stolen
(4 May 2015; AZ Central)
Despite rumors and strange eBay listings, the collection of this closed museum has not been stolen or sold.

The aging gangster and the mystery of the missing masterpieces
(4 May 2015; The Telegraph)
Does Robert Gentile of Connecticut know where the paintings stolen from the Isabella Stewart Gardner Museum are?

A 17th-century painting looted by the Nazis was returned to its owner today
(5 May 2015; Quartz)
Portrait of a Man by Giovanni Battista Moroni which has been in storage in the Louvre since 1951 has been returned to heirs.

Mobster Suspected In Museum Theft Case Pleads Not Guilty To Gun Charges
(5 May 2015; Hartford Courant)
Not a surprise that the man accused of knowing something about the Gardner theft would say he doesn’t. Also not guilty to other charges.

New Art Restitution Effort Fueled By Return Of Work
(6 May 2015; The Jewish Week)
A recent return of a painting to an heir will revitalise restitution efforts, this article states.

Who Are the Rightful Owners of Artifacts of Oppression?
(7 May 2015; Hyperallergic)
A discussion of the possible sale of artefacts produced by Japanese American victims of American concentration camps and other physical objects of oppression.

Why aren’t American museums doing more to return Nazi-looted art?
(9 May 2015; Fortune)
You could ask the same about looted antiquities. The answer is quite obvious.

Ukrainians Try to Solve the Mystery of the Golden Loaf
(4 May 2015; Wall Street Journal)
“The ornament, a symbol of corruption in nation’s upper crust, has gone missing”

Police probe theft of Roman artefacts from Melrose Abbey
(5 May 2015; Herald)
The Roman pottery had been excavated at the Abby and was on display at the museum.

Stolen Lowry paintings are being used as currency by drug-dealing crime bosses says victim of £1m art heist
(6 May 2015; Manchester Evening News)
After a decade, none of the 13 works have been recovered and thus folks are speculating they are being used as ‘collateral’, although there is no evidence for this.

Stolen art returned to Herefordshire churches
(7 May 2015; Hereford Times)
Called Operation Icarus, police have recovered about £250,000 worth of sacred art stolen from churches around the UK.

Mummy Displayed in Hungary Sets Chinese Villagers in Pursuit of Lost Icon
(3 May 2015; New York Times)
The monks remains are believed to have been stolen from a village in the province of Fujian.

Stolen Buddha sculpture head to unite with the body at Taiwan exhibition
(5 May 2015; Xinhua)
The headless statue is in China’s Hebei Province. The head was taken in 1996 and returned to a temple by a private collector.

Master Xingyun of Taiwan donates relics to place of origin
(7 May 2015; CNTV)
The head is believed to have been stolen from a temple in Hebei province (as the body is still there).

Dutch Collector Agrees to Return Mummified Buddha
(8 May 2015; CRIEnglish)
Oscar van Overeem, who says he bought the mummy stolen in 1995 sometime in 1996, has agreed to return it to Yangchun village.

Operation Hidden Idol: The Struggle To Bring Back Indian Antiquities
(4 May 2015; Swarajya)
A good read on the politics of what happens to Indian antiquities after they are smuggled.

Two B’luru Men Among 4 Caught with 2 Idols
(9 May 2015; New Indian Express)
Interesting details in the article. One of the idols has been identified as stolen from a particular temple. The other has not been IDd.

Looters prowl as Nepal’s treasures SPILL INTO VIEW
(7 May 2015; The Nation)
Discussing the post-earthquake insecurity of sacred sites.

Nepal’s Only National Art Collection in Peril After Earthquake
(8 May 2015; Hyperallergic)
The building is unstable and the permanent collection has not been recovered yet. The museum official quotes notes that these works of art are the oldest that Nepal has because they rest has been looted, smuggled, and sold out of country.

Ancient jewel-studded vest missing after Nepal quake Read more at: http://www.oneindia.com/international/ancient-jewel-studded-vest-missing-after-nepal-quake-1741950.html
(9 May 2015; One India)
A number of objects are missing from the Rato Machindranath temple in Bungmati including a renowned bhoto, a jeweled vest. It is presumed they are in the rubble of the temple but there are suspicions of theft.

Balochistan’s assets: Govt disinterest keeps smuggled relics in Europe
(4 May 2015; Express Tribune)
1200 artefacts seized in Italy and Germany have not been returned to Pakistan. The provincial government has done little to recover them.

Judicial officials suspected of antiquities smuggling
(4 May 2015; Daily News Egypt)
Coming out of a corruption investigation by the Administrative Control Authority, little details have emerged on this case.

Egypt’s prosecution orders media gag on antiquities smuggling case
(4 May 2015; Ahram Online)
There is now a media gag in place regarding this case which involved police officers and other officials.

How Thieves Stole The Most Expensive Watch In The World: An Excerpt From Marie Antoinette’s Watch
(7 May 2015; Tech Crunch)
A robbery at the L.A. Mayer Museum in Jerusalem in 1983.

Syrian authorities seize 6,000 looted antiquities
(9 May 2015; Times of Israel)
This is coming from the state news agency. Specifically 69 of the pieces they are claiming have been reclaimed were returned from Lebanon.