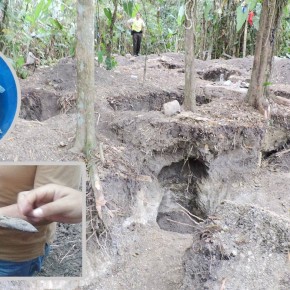 Hot this week: Destruction at the Mosul museum.

Art Law Rising
(23 February 2015; Barrons)
In an unregulated art market with endless disputes and many avenues for crime, we are seeing the rise of the art lawyer.

Restitution, Repatriation and Return: When Objects Go Back
(25 February 2015; The National Law Review)
A general overview of restitution from a law perspective

The man who returned his grandfather’s looted art (Nigeria)
(26 February 2015; BBC News)
A text article to go along with the audio story.

Interpol Contacted in Stolen Artifacts Case (Belize)
(24 February 2015; News 5)
The San Pedro House of Culture was burgled and a number of Maya antiquities were stolen. Interpol has been contacted in an effort to recover the tiems.

Estadounidenses devolverán pinturas robadas en Bolivia (Americans return paintings stolen from Bolivia; Bolivia)
(26 February 2015; El Nuevo Herald)
You all know Andean Church Theft is my pet topic. The collectors bought the pieces, stolen from a church in 2002, from Brazil which tells me a lot about the path these items take. The paintings were checked against the Interpol database before an exhibition and were found to be stolen.

Coleccionistas devuelven óleos robados en Bolivia (Collectors return oil paintings stolen in Bolivia; Bolivia)
(28 February 2015; La Republica)
Much the same article but with a photo of the collectors who returned the paintings.

Cuba refuses to return seized art despite thaw in relations with US
(23 February 2015; The Art Newspaper)
Cuba rejects that art seized from exiles was stolen and claims that it has no mechanism to return it.

Banda se dedica a robar pinturas “por encargo” (Gang dedicated to stealing paintings “to order”; Guatemala)
(24 February 2015; El Periodico)
Guatemala has determined that the a gang that stole, among other items, the beautiful Colonial paintings in El Calvario Church in Antigua were most likely working ‘to order’, they had a buyer lined up.

Venta de piezas arqueológicas al mejor postor (Sale of archaeological pieces to the highest bidder; Mexico)
(23 February 2015; La Verdad)
This report says that people working on construction projects in Quintana Roo are finding artefacts and not reporting them. They spoke with people who worked on an airport near Tulum who said they just took stuff home. The images shared in the article appear to be of fakes.

Over 3,800 Archaeological Pieces Repatriated to Peru from Argentina (Peru)
(25 February 2015; Latin American Herald Tribune)
This was announced at an exhibition of other repatriated items. Apparently this is the result of a decades-long court battle.

Nazi-looted Rothschild art goes to MFA (USA)
(23 February 2015; Boston Globe)
This is after the long process of having the artworks restituted.

Oregon State Police seize Native American artifacts and burial goods in Klamath Falls (USA)
(23 February 2015; The Oregonian)
Meth and drug distribution items were also found in the home. This is the result of a 7 month investigation into artefact theft and trafficking in the region.

Restoring A Legacy’: Artwork, Once Stolen By Nazis, To Be Displayed At MFA (USA)
(24 February 2015; Radio Boston)
An audio programme about the donation of the Rothschild collection to the Museum of Fine Arts, Boston

Stolen 17th century books discovered in S.F., to be returned to Italy (USA)
(25 February 2015; SF Gate)
Also some Pompeii frescoes, a cannon, ancient Greek pottery. Appears to be results of several cases but no details given.

Stolen Picasso Work Is Seized in Newark (USA)
(26 February 2015; The New York Times)
La Coiffeuse (1911) had been missing from the Centre Georges Pompidou since 2001 and was found in a FedEx shipment from Belgium declared as “art craft/toy” with “Joyeux Noel” written on it.

Isabella Stewart Gardner Heist: 25 Years of Theories (USA)
(26 February 2015; The New York Times)
We all have a favourite.

Elizabeth Taylor Trust Sues Christie’s Over $8 Million Botched Jewel Sale (USA)
(26 February 2015; ArtNet News)
Christie’s cancelled some sales due to buyer complaint, including that of a necklace for $8.8 mil because it was billed as ‘The Taj Mahal’ but not actually owned by a Mughal emperor. In trying to not alienate the buyer, they appear to have angered the seller and it is now messy.

Convicted Forger Wolfgang Beltracchi Claims Fake In Albertina Museum (Austria)
(25 February 2015; ArtLyst)
He could be totally lying but the museum has to take it seriously.

German court to rule on stolen Cypriot treasures in mid March (Cyprus)
(24 February 2015; Cyprus Mail)
As attempts to reach an amicable settlement have failed, the court will rule on what is to happen to 85 Cypriot antiquities stolen by Turkish antiquities smuggler Aydin Dikman.

Germany Is Sued in U.S. Court Over Medieval Treasure Acquired by Nazis (Germany)
(24 February 2015; Wall Street Journal)
The claimants say that the medieval Christian Guelph treasure was taken from their relatives under duress in 1935. The museum that houses the treasure say the sale was consensual and a fair price was paid.

Stolen exhibits from Stasi headquarters recovered in Berlin (Germany)
(24 February 2015; Assiciated Press)
The exhibits were stolen several years ago and were found in an apartment during a search associated with an unrelated case.

Guelph Treasure case takes Germany by surprise (Germany)
(25 February 2015; DW)
An interview with Hermann Parzinger, President of the Foundation of Prussian Cultural Heritage, about the alleged forced sale of this spectacular collection

Bewährungsstrafe für Raubgräber (Suspended sentence for looter; Germany)
(25 February 2015; SWR)
The metal detectorist who was found to have looted and not reported a ‘barbarian’ treasure was given a suspended sentence of 1 year, 3 months and a 3000 euro fine.

Hercules Escapes—And Italy’s Closing In On More Looters (Italy)
(28 February 2015; The Daily Beast)
Some words on the previously mentioned cases. Interestingly this is another case where the buyer was given a promise not to prosecute if they returned the statue.

The Dutch Stedelijk Museum Questions Origins of Some of Its Art (Netherlands)
(26 February 2015; Wall Street Journal)
In the exhibition “The Stedelijk Museum in the Second World War” the museum displays 16 paintings by artists including Paul Klee, Wassily Kandinsky and Henri Matisse that they admit they may not rightly own.

Russian art historian on trial over forgery (Russia)
(26 February 2015; The Art Newspaper)
Art Historian Elena Basner is accused of selling a fake of In the Restaurant, a 1913 work by Boris Grigoriev. The original State Russian Museum and the man she sold it to says it was a plot.

Concluye la restauración del tapiz de Roda de Isábena, robado por Erik el Belga en 1979 y que volverá a Huesca (Conclusion of the restoration of the tapestry of Roda de Isábena, stolen by Erik el Belga in 1979 and returned to Huesca; Spain)
(23 February 2015; Heraldo)
The tapestry of the Virgin and Saint Vincent, a 16th century piece, was stolen by the famous art thief from the Cathedral of Roda de Isábena in 1979. It was located in the United States in the hands of a collector and returned to Spain in 2013.

Spanish police arrest 9 on suspicion of selling fake art (Spain)
(28 February 2015; Associated Press)
The suspects were arrested in Valencia and include counterfeiters and intermediaries. 271 works were also seized.

Rosenberg Heirs’ Claim to Gurlitt Matisse Stalled (Switzerland)
(24 February 2015; ArtNet News)
According to the Kunstmuseum Bern the heirs have not provided the proper paperwork but representatives from Art Recovery say this is not true.

Head of Geneva, Luxembourg and Singapore freeports under investigation (Switzerland)
(26 February 2015; The Art Newspaper)
The charges are for defrauding customers, possibly to do with manipulation of art market prices.

Islamic State is selling looted Syrian art in London to their fund activities (UK)
(25 February 2015; The Washington Post)
This article is the epitome of reckless. It reports that ANOTHER PAPER reports that ISIS-looted Syrian items are being sold in the UK. The experts quoted aren’t saying that.

Artefacts imported to Australia from Afghanistan, Iraq, Syria raise terror fears (Australia)
(24 February 2015; Herald Sun)
The article claims that over the last 4 years nearly 800 artefacts from these countries have been imported into Australia, although I caution that many of these will be under entirely legal circumstances.

Exhibits on loan to be protected, at a price (Australia)
(27 February 2015; The Australian)
The Protection of Cultural Objects on Loan Scheme would ‘protect’ cultural objects on loan from foreign institutions from being subject to legal claims. This, of course, means that they can borrow looted antiquities and objects without countries of origin or individuals being able to do anything in the new jurisdiction.

मंदिर से चोरी हुईं कीमती मूर्तियां (Precious Statues Stolen from Temple; India)
(23 February 2015; Navbharat Times)
According to the priest, three bronze statues were stolen from a temple in Laharpur. The police have been notified.

Jain community urges SSP to solve temple theft case (India)
(27 February 2015; The Times of India)
Nine idols were stolen from the Digambar Jain temple in Meerut on Wednesday along with a donation box.

Idol lifters get 3 years jail term (India)
(27 February 2015; Business Standard)
The four individuals sentenced were convicted of stealing 7 bronze idols from the Irudhayapureeswarar temple at Thilaisthanam in Thanjavur district in 2010.

Iranian Police Return Stolen Torah to Jewish Community (Iran)
(22 February 2015; Arutz Sheva)
The theft of the hand-written Torah from a synagog in Shiraz was reported two weeks ago and the FARS news agency is saying the manuscript has been recovered and returned.

Iraq: why looting can be a good thing (Iraq)
(27 February 2015; 4 News)
“The West is the Best” is an argument for fools. The author neglects to mention that history is mostly random. Had the BM been bombed during WW2 (or whenever) we’d lose those winged bulls.

Misreporting of Islamic State Looting Does Damage (Iraq)
(27 February 2015; Blouin ArtInfo)
Yes, and there is a disturbing amount of misreporting.

Looted Iraqi Museum in Baghdad reopens 12 years on (Iraq)
(28 February 2015; BBC News)
Apparently the reopening was brought forward in response to the destruction at the Mosul Museum.

Iraq PM vows to hunt down ISIS vandals who destroyed statues (Iraq)
(28 February 2015; CBC News)
Interestingly he sort of says that artefacts may have been stolen from the museum and warns that they are documented and can be tracked.

Israel struggles to stop archaeological site raids (Israel)
(25 February 2015; Al-Monitor)
There is a lot of looting in Israel and archaeologists fear that news like the gold hoard found and properly reported by divers will inspire more looting.

Syria accuses Turkey of ’facilitating’ smuggling of antiquities across border (Syria)
(23 February 2015; Today’s Zaman)
In what seems to be a response to Turkey’s relocation of the Suleyman Shah tomb, Syrian culture minister Issam Khalil says, basically, that antiquities trafficking is Turkey’s fault because they are not securing their side of the border.

Syria says must be part of fight against antiquities theft (Syria)
(23 February 2015; Reuters)
Much like the previous article on the topic. Much Turkey blaming for the illicit trafficking of antiquities.

Historians Pore Over ISIS Video of Smashed Statues for Clues to What’s Been Lost (Syria)
(26 February 2015; The New York Times)
We are at a point where the NYT is reporting what academics are saying on Twitter. Careful what you say.