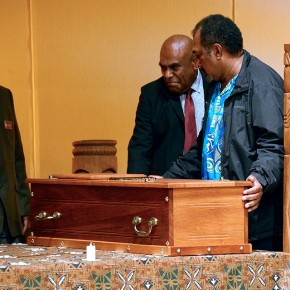 Hot this week: SERIOUSLY, was the Amphipolis tomb looted or not?

The Elusiveness of Stolen Art
(29 August 2014, The Atlantic)
I don’t know how many times someone has said “Why don’t you put a GPS tracker on everything”. This article tells why that is impossible.

The joy of metal detecting – it’s not just about the treasure
(29 August 2014, Guardian Opinion is Free)
Thoughts from a metal detectorist in the UK. Worth reading in that it is clear that this person has either not considered or not been given the opportunity to explore his interest in the past via real archaeology. How can we get these people to make a contribution, not just cause destruction?

Should Britain return the artifacts allegedly stolen from Bunyoro in the 1890s? (Uganda)
(27 August 2014, New Vision)
A good opinion piece from Nsibambi Fredrick of the Cross-Cultural Foundation of Uganda.

Tourism Police foil unprecedented underwater antiquity theft attempt (Egypt)
(23 August 2014, Cairo Post)
The thieves dove into the Nile and began to dig a tunnel under the site of Houd Zelikha. They make it out to be quite a gang, complete with dive suits and breathing apparatuses.

246 pieces of Mohamed Ali dynasty jewelry confiscated: authorities (Egypt)
(25 August 2014, Cairo Post)
The jewelry, owned by family of Mohamed Ali, was recovered before they could be sold at auction, including a brooch which contains the 3rd largest diamond in the world. In 1954 Nasser nationalised the personal belongings of the royal family so the jewelry belonged to the country and couldn’t be sold.

Four Ottoman coins are back to Egypt
(28 August 2014, Ahram Online)
An Egyptian was found with one coin and a German with three coins in Suez.

Egypt’s tourism revenues fall after political upheavals
(29 August 2014, The Guardian)
This, of course, cannot be good for the country’s antiquities.

Chavez, Matisse, and the Heist That Shook the Americas
(27 August 2014, Riptide)
A piece about the Venezuela Matisse theft and return.

Saving Scraps From the Past Amid New Haven’s Revitalization
(24 August 2014, The New York Times)
Apparently New Haven, CT, doesn’t require developers to consult archaeologists before building which is terrifying. Thus you end up with this guy, an ‘amateur archaeologist’ (like…an amateur surgeon?), going around and begging to extract stuff from excavation sites. The article is congratulatory, but this guy is not a professional. The city deserves real archaeology.

Presidential tokens stolen from Oregon State University museum returned 50 years later
(26 August 2014, Oregon Live)
Stolen from the Horner Museum in the 1960s, found by the county sheriff’s office while serving a warrant to a home. Not particularly valuable, but what are the chances?

Former Assistant to Jasper Johns Pleads Guilty in Thefts of Artworks
(27 August 2014, New York Times)
Johns’ assistant of almost 30 years stole his paintings and sold them to the tune of $3.4 million. Johns, of course, is alive and apparently noticed.

Ancient skeletons move one step closer to reburial (USA)
(28 August 2014, Science)
A very messy case. 9000 year skeletons are moving closer to being given to a Native American group. They were found in 1976 and a group of scientists have sued the University to prevent the return under the Kennewick Man idea: that the skeletons are too old to be culturally or genetically tied to people who claim them.

France Returns New Caledonian Rebel Chief’s Skull
(29 August 2014, ArtNews)
After the French killed Chief Atai 135 years ago, they preserved his head, and sent it to France for racist ethnographic study. This, of course, resulted in him being displayed in a series of museums. It was thought to have been stolen, but wasn’t and was in the National Museum of Natural History since 2011. New Caledonia is holding an independence referendum in 2018.

Guess Who? Mystery surrounds next director of the National Gallery of Australia
(27 August 2014, Sydney Morning Herald)
The process is taking a long time, but everyone is concerned, of course, about the looted Shiva scandal that the last director retired in the middle of.

Ainu oppose plans to build national memorial for remains (Japan)
(25 August 2014, The Japan News)
Japanese universities collected the remains of 1636 Ainu for ‘research’ in past decades. Now the government is going to make a memorial to house those remains. However, some Ainu are protesting this, saying their relatives should be buried in the earth according to their tradition. All of this comes after a lawsuit pressed by Ryukichi Ogawa that claims the remains of his ancestors were illegally dug up and stolen. He also demands the return of grave goods.

Fakes plaguing Chinese antiques market drive boom in research
(26 August 2014, The Art Newspaper)
Old auction catalogues have been expensive for years, but this article ties that to alleged fakes in the Chinese antiquities market.

Meet the saviour of India’s heritage
(29 August 2014, Mid-day)
A profile of Kirit Mankodi who is working to crease an online database of stolen Indian art.

Academics and Archaeologists Fight to Save Syria’s Artifacts
(24 August 2014, The New York Times)
Feel like the same article is being written over and over again at this point. Iraq, Syria, and Egypt here.

Historian Claims The Louvre Museum Holds Ancient Amphipolis Tomb Treasures
(26 August 2014, Greek Reporter)
It appears as if we are starting to go down the rabbit hole. I clicked on this all excited that the Louvre might have a sphinx head but, no, it is pure speculation.

Three 15th-century paintings stolen from Milan’s Sforza Castle
(25 August 2014, Xinhua News)
The paintings are by an unknown painter from Cremona and are valued at only €5000 each (which, by the way, surprises me). This is the first theft at Sforza Castle since the 1980s.

Bulgaria arrests four for illegal archaeological dig of ancient Roman villa
(24 August 2014, The Sofia Globe)
The digging was going on in the village of Vetren in the Stara Zagora area. Apparently a large number of coins, jewellry and pottery were confiscated.

Bulgaria Busts Int’l Antiquities Trafficking Ring
(27 August 2014, Novinite)
Another Bulgarian bust, this one in the cities of Veliko Tarnovo and Shumen and sounds like it was mostly ancient and historic weaponry.

Thefts from Norfolk’s museums – and damage to objects – revealed
(27 August 2014, EDP24)
Results of a freedom of information request for museum thefts throughout Norfolk. E.g. details on the theft of Lord Nelson-related artefacts from his home museum in Norfolk in 2012.

Campaigner fights on over historic gold relic (Scotland)
(27 August 2014, Dunfermline Press)
Well this one is messy. Was this gold wreath taken from a Greek tomb by Lord Elgin? Was it taken from a Turkish site? Yow.

Ten years in jail for US wine fraudster ‘not enough’ says Frenchman who uncovered him
(24 August 2014, Telegraph)
A California-based wine collector mostly sold fakes to others. He was sentences to 10 years in prison and a $20 million fine plus $28 million to victims.

Armstrong photos recovered
(25 August 2014, The Exponent)
A signed photo of Neil Armstrong that hung in his former fraternity at Purdue has been stolen again…and recovered again.

Someone Donated A Human Skull to Goodwill
(27 August 2014, Media ITE)
This also was happening in the Northwest…also that skull found dumped in the woods in the UK. People collect these, buying them sometimes in illicit ways, then they get rid of them them. You can’t quite toss it in a bin.

Global trade in stolen Lego surges as thieves target valuable collector sets to sell on the black market
(25 August 2014, Financial Post)
As you may or may not know, LEGO has been dominating part of my life lately. SIgh. Well here is a news story that combines both of my worlds.